The distinct, mournful howl of a highland wild dog was once a mainstay in Papua, but for the past 50 years, scientists had considered them extinct in the wild. Fewer than 300 of their domestic counterparts, commonly called New Guinean singing dogs, are held in captivity across the globe, and their numbers are suffering from inbreeding. A genetic analysis of wild dogs, published Monday (August 31) in PNAS, confirms that these canines are still living in the wild.

There have been a few anecdotal sightings of these dingo-like canines over the years, though many conservationists assumed they were strays related to the captive singing dogs, which make a sound like a blend of wolf howls and whale calls.

The wild dogs were discovered near a gold mine in 2016 by zoologist James McIntyre, who went on to found and preside over the New Guinea Highland Wild Dog Foundation. At the time, he captured images of 15 individual dogs. Two years later, he obtained three genetic samples, which came from two dogs in live traps and one found deceased.

The team, led by geneticist Elaine Ostrander at the National Institutes of Health, compared the DNA from these wild dogs to samples from 161 dog breeds, captive singing dogs, and dingoes. The authors determined that these wild dogs shared a strong genetic similarity to the captive singing dogs. These are not newly feral canines, the authors concluded, but likely members of the ancestral population.

“For decades we’ve [thought] that the New Guinea singing dog is extinct in the wild,” coauthor Heidi Parker of the National Institutes of Health tells The New York Times. “They are not extinct. They actually do still exist in the wild.”

According to the Times, all domestic New Guinean singing dogs descended from only eight animals, and genetic variation is relatively low. In their paper, the authors state that the wild dogs “should be resourced for conservation efforts to rebuild this unique canid population.”

University of Melbourne zoologist Peter Dwyer, who was not involved in the research, tells Science that more work is needed to show that these aren’t mutts but true ancestral wild New Guinean singing dogs. However, the current analysis is “very useful” for teasing apart the relationship between domestic and wild canine populations. 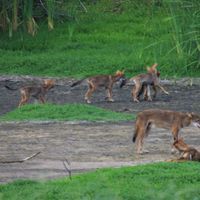