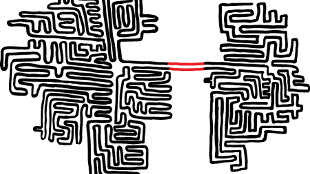 Artist’s impression of conjoined ribosome subunitsERIK CARLSONIn every kingdom of life, ribosomes—the protein-synthesizing machines of cells—are comprised of two separate subunits. That is the way it has been for billions of years, but now, scientists have stitched the subunits together. In so doing, they have opened the doors to both new discoveries on the biology of these machines and possibilities for synthetic biology applications. The results are published today (July 29) in Nature.

“It’s a really clever paper and there’s a huge body of work that underlies it,” said molecular biologist Harry Noller of the University of California, Santa Cruz, who was not involved in the work.

“It’s very exciting,” added Yale University’s Farren Isaacs who also did not participate in the study. “It’s a key advance in understanding ribosome [function] and also in establishing a path to fundamentally alter the catalytic center of the ribosome ....

Molecular biologists often tinker with the machinery of cells to figure out how they work. But for ancient machines like the ribosome, such tinkering isn’t straightforward, said Alexander Mankin of the University of Illinois, Chicago, who led the study. “The catalytic center of the ribosome is essentially untouchable because every single nucleotide is so important that by messing with it you kill the ribosome,” and therefore the cell, he said.

But the potential benefits of tweaking ribosome function are great. For example, ribosomes could be altered to produce proteins from synthetic amino acids that resist degradation. Such proteins could be useful for making drugs with long-lasting activity. Ribosomes could even be designed to produce chains of synthetic polymers in place of amino acids. In short, said Mankin, “the ribosome is viewed as one of the most interesting and attractive machines for synthetic biology.”

To generate ribosomes capable of such feats while keeping the host cell alive, one idea was to create specialized versions that read specific messenger RNA (mRNA) transcripts—therefore preventing interference with the essential functions of the normal ribosomes. “With such a specialized ribosome, you can do whatever you want because it isn’t important for the cell,” Mankin explained.

But therein lies a second problem. Ribosomes exists in two parts, and “at every round of protein synthesis the subunits are free to exchange,” Mankin said. This means there is nothing to stop engineered subunits from disturbing their normal counterparts.

In theory, linking the two specialized subunits together would prevent their interaction with the host cell’s ribosomes, said Mankin. However, given the evolutionary conservation of the separate-subunit system, the chance of an engineered ribosome working as a single unit was pretty remote. “We had a clear idea that we were trying to do something crazy,” he said, “it should have been almost impossible.”

But try they did. Ribosomes are a combination of proteins and ribosomal RNA (rRNA) molecules. So, to tether the subunits, Mankin and his colleagues engineered one long rRNA molecule from two rRNAs, 16S and 23S, which reside in the small and large subunit, respectively. Linking these rRNAs thus linked the subunits. The team made numerous iterations of the long conjoined rRNA until it hit on one that could successfully replace the normal 16S and 23S rRNAs of a bacterial cell. “This was not a casual weekend experiment,” said Noller. “This was a major effort.”

As a next step, the researchers altered the tethered ribosome, which they called Ribo-T, such that it would only read specialized mRNAs and not normal mRNAs. They did this by altering a sequence within the 16S rRNA that recognizes and binds to a specific sequence in mRNAs, and then altered that sequence in the chosen mRNAs to correspond. “You can think of it as opening up an orthogonal genetic system within the cell,” said Isaacs.

The last piece of the puzzle was to mutate the “untouchable” catalytic center of the engineered ribosome to see whether its function could be changed. As a proof of principle, the team showed that it could indeed mutate Ribo-T’s catalytic core and enable the synthetic ribosome to read straight through a particular mRNA sequence that ordinarily causes normal ribosomes to arrest.

The work is “really a big accomplishment,” said Isaacs.

“The next question is, can you now really build on this and more fundamentally evolve that catalytic centre to permit new types of chemistry?” he continued. “That’s going to really be the ultimate test.”