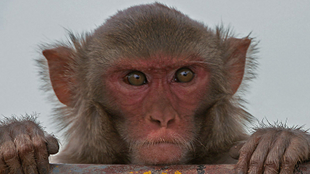 Rhesus macaque. Wikimeda Commons. J.M.Garg.Pathogenic infection with simian immunodeficiency virus (SIV), a relative of HIV that infects non-human primates, is associated with increased diversity of gastrointestinal virus species in rhesus macaques, according to findings published today (October 11) in Cell. Though previous work has implicated intestinal bacteria in stimulating chronic inflammation, which is believed to promote progression from HIV or SIV infection to AIDS, the new findings suggest that gut viruses may also play a role.

“This elegant study takes [the role of the gut microbiome] to another level, suggesting the idea that these viruses could be opportunistic infections in the gut of these monkeys,” said microbiologist Donald Sodora, at the Seattle Biomedical Research Institute, who did not participate in the study. In turn, the immune response caused by these viral infections could then fuel the progression of SIV to AIDS.

Some monkey species can be infected...

Previous work has investigated the influence of gut bacteria in exacerbating inflammation and promoting AIDS, but the role of viruses have been relatively understudied, said immunologist Larissa Thackray of the Washington University School of Medicine. The gastrointestinal viromes of the species generally used as SIV models—rhesus macaques, sooty mangabees, and African green monkeys—are not well described in healthy animals, let alone immunocompromised individuals, she added.

In order to examine the virome of pathogenic and non-pathogenic SIV infections, Thackray and her colleagues turned to rhesus macaques, which succumb to AIDS as a result of SIV infection, and African green monkeys, which regularly resist the disease. Using next-generation RNA and DNA sequencing, the team searched for viral sequences in the guts of both infected and non-infected monkeys, and found that SIV-infected rhesus macaques, some of which succumbed to AIDS during the study, showed an expanded repertoire of gastrointestinal viruses. SIV-infected green monkeys, which remained healthy, and all uninfected animals showed no viral changes. The results point to the importance of virome composition in inflammation and the progression to AIDS.

However, the new data do not show whether carrying SIV leads to new viral infections, or whether immunosuppression as a result of being SIV-infected allows viruses previously present at undetectable levels to replicate to high levels, acknowledged Thackray. Thus, it’s not yet clear whether the viruses are triggering chronic immune system activation and thereby promoting pathogenesis, or merely taking advantage of a compromised immune system.  Future research should probe these possibilities, as well as test human patients to see if HIV infection also correlates with virome changes.

The research also uncovered more than 30 previously undescribed virus species—and this is probably an underestimation. Some types of viruses were so diverse that “we just stopped counting,” said Thackray. Pathologist Guido Silvestri at Emory University, who was not involved in the study, is excited by the number of newly identified species. “In terms of viruses, we’re just scratching the surface, because they’re difficult to isolate with conventional methods,” he said. “We thought most viruses are pathogenic, but that’s probably just a small minority.” Using new sequencing technologies, scientists “are finding viruses everywhere,” he added.

These same advancing technologies will also allow researchers to better discern the role of viruses in the progression of SIV, and possibly HIV, to AIDS, noted Thackray. These new methods “will give the power to tease out some relationship of components of the metagenome.”