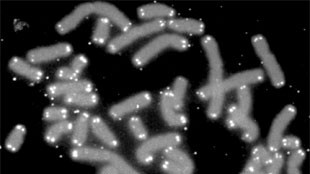 The study, published today (May 3) in Science, “represents the closing of one chapter in understanding telomere biology,” said biochemist Steve Jackson from the University of Cambridge, who was not involved in the work. Though the results weren’t unexpected, added biochemist Stéphane Marcand from the University of Oxford, “the data in this paper provide a synthesis of the past 10 to 15 years of research in the field.”

Telomeric sequences at the ends of chromosomes protect the coding DNA from erosion during DNA replication. Telomeres are believed to dictate a cell’s lifespan, and have been linked to...

Previous research identified four repair pathways that mistake telomeres for damaged DNA, and enact molecular protocols designed to repair that damage. These wrongly attempted fixes can lead to genetic abnormalities that could increase the risk of cancer. Two of these—homologous recombination (HR) and non-homologous end-joining (NHEJ)—are different routes for fixing the supposed damage. The other two involve the ATM and ATR genes, which initiate a chain of events that stops cells from growing and dividing.

But these experiments all involved removing each of the shelterin proteins one at a time, which led Agnel Sfeir, currently at New York University School of Medicine, to suspect that scientists were missing something—what if the remaining shelterin proteins were compensating for the loss of any single member? Working with Titia de Lange from the Rockefeller University and managed to remove the entire group by getting rid of the two members that anchor the rest to the telomere, TRF1 and TRF2. The researchers also had to knock out other proteins that would fuse the uncapped telomeres together, to allow them to figure out what happens to the naked ends.

Sfeir was adamant on this approach, even though it took her several years to breed the right mice. “It’s an awful experiment to do,” said de Lange, amazed Sfeir insisted on taking it on. “I wouldn’t have subjected anyone else in my lab to it.”

The experiment revealed that uncapped ends are vulnerable to six—not four—different repair systems. One of the previously overlooked pathways is an alternative way of joining two ends, known as alt-NHEJ. The other involves cutting back one of the exposed DNA strands, a process known as hyperresection.

“Our work describes the full spectrum of events that could happen at chromosome ends that have lost telomere protection,” said de Lange. “There aren’t four pathways, but six, that pose a threat to the integrity of the chromosome end, and that telomeres must protect against.”

Shortened or damaged telomeres are a hallmark of the cellular aging process, as well as many diseases including cancers and dyskeratosis congenita, an inherited disorder that causes premature aging. The researchers hope that by revealing the pathways that threaten unprotected DNA ends, they can better understand the early stages of these conditions, and find new avenues to treat them.

There are still a lot to learn about shelterin. For instance, how the structure of its components contribute to their function, how the complex is controlled under different circumstances, and how it misbehaves to cause disease are still open questions. “There remains much else to be understood,” says Jackson.