When acne-causing bacteria strike, the immune system can fight back by transforming some of the surrounding cells into fat cells that emit antimicrobials, finds a study published February 16 in Science Translational Medicine. The scientists behind the project say the revelation could lead to new, targeted treatments.

Cutibacterium acnes typically causes pimples after it infects a hair follicle, feasts on trapped debris, and triggers inflammation by releasing digestive enzymes that damage nearby cells. However, the researchers discovered that C. acnes infections can trigger adipogenesis—the transformation of cells into fat cells, or adipocytes—in skin cells called fibroblasts surrounding an infected hair follicle. While the lipids these cells begin to store can aid the development of lesions—or more colloquially, pimples—the data also suggest that adipogenesis triggers increased expression of the gene CAMP, which codes for an antimicrobial peptide called cathelicidin that helps curb the bacterial infection.

The finding that fibroblasts transform to play an active role in the immune response came as a surprise to Salome Muravvej, a dermatologist in Mombasa, Kenya, who didn’t work on the study. She tells The Scientist over email that “the fibroblasts are mainly viewed as the cell that provides structural support, especially for deeper layers of skin, so it’s not the first cell type that would come to mind when thinking of directly fighting skin infections.”

The research team, led by University of California, San Diego, dermatologist Richard Gallo, also learned that retinoids—already used as a treatment for severe acne because of their well-known ability to prevent lipid buildup and clear detritus from infected pores—also promote the fibroblasts’ production of cathelicidin, hinting at the prospect of developing new treatments that specifically target and enhance the immune response to acne.

“The prevailing theory about the action of systemic retinoids like isotretinoin (Accutane) has been that it worked by decreasing lipid synthesis from sebaceous glands and altering the growth of the epidermal cells,” Gallo tells The Scientist in an email. “Our data suggest that is not the whole story.” 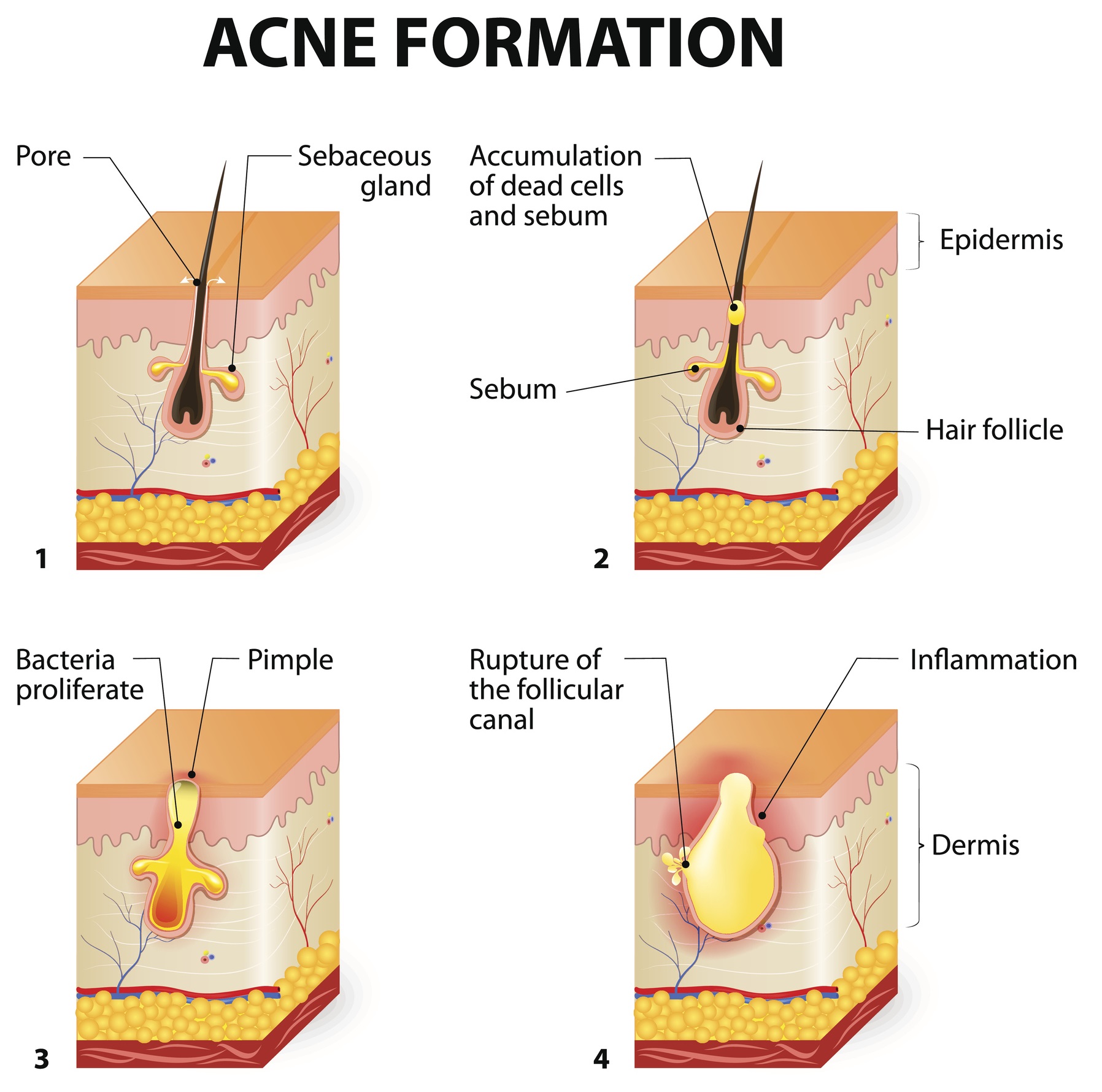 Study coauthor Alan O’Neill, a microbiologist in Gallo’s lab, tells The Scientist that the paper “provides a new mechanism of action for a very important drug in the treatment of acne. This drug is working in an additional, previously unknown way by targeting these fibroblasts, and specifically targeting their pathogenic antimicrobial expression.”

“It was a very interesting and surprising finding,” Muravvej says. She adds that it’s “also a reasonable finding,” because “reactive adipogenesis has been shown by prior studies to occur in response to Staphylococcus aureus invading skin, and also in the gut in response to injury (to suppress penetration of microbial products into the bloodstream.)”

To determine how fibroblasts respond to C. acnes infections, the researchers biopsied skin samples from six acne patients and probed the fibroblast transcriptome with single-cell RNA sequencing. They found that two subsets of fibroblasts had gene expression signatures indicating they were primed for fat cell differentiation—as Gallo tells The Scientist, they had become “preadipocytes.” The researchers also stained the skin samples to search for a marker called PREF1, which is expressed in fibroblasts undergoing adipogenesis, in addition to cathelicidin. They found high levels of both in the tissue surrounding infected hair follicles, indicating a localized immune response.

The team then recreated the experiment in a mouse model, injecting mice with C. acnes and conducting a nearly identical RNA sequencing experiment on biopsied skin lesion tissue. The researchers found increased staining for PREF1 and the antimicrobial peptide coded for by CRAMP, the mouse version of CAMP, in the cells closest to the lesion. When they inhibited reactive adipogenesis by treating mice with bisphenol A dyglycidyl, the researchers found significantly less lipid buildup—and significantly smaller lesions—than in a control group, suggesting that the lipid buildup that comes with adipogenesis benefits the bacteria, even in the presence of increased antimicrobial activity.

“Human acne is very complicated,” he says. “It’s a multifactorial disease. But the fact that we saw similar transcriptional programs in mice that were injected with just a single [species of] bacteria—that was really strong and that told us that the bacteria C. acnes is probably what’s driving a lot of this reaction in fibroblasts in human acne.”

The team then probed how mouse cells communicated with each other during C. acnes infections, analyzing how cells and surface proteins interacted to identify active signaling pathways. They found that the fibroblasts served as communication hubs, according to the paper, and O’Neill suggests that these cells play an important role in coordinating the immune response to C. acnes infection and acne development.

“We would love to know how macrophages, myeloid cells, and other immune cells respond to these fibroblasts that are undergoing reactive adipogenesis, and what that means for the overall inflammatory environment of acne,” O’Neill tells The Scientist, adding that he hopes to conduct experiments designed to map out those relationships in the near future.

Gallo, O’Neill, and the rest of the team also wanted to know how retinoids, a class of compounds that’s been used to prevent and treat severe acne for more than 50 years, affect reactive adipogenesis. They began by treating mice with retinoic acid on day three after an initial C. acnes infection. Three days after that, the researchers observed reduced lesion size and severity that coincided with increased CAMP mRNA expression and reduced lipid staining, according to the paper.

However, when they recreated the experiment on mice that had been gene-edited to disable their CRAMP genes, the researchers found that retinoids seemed to have no effect. The mice had larger lesions than wild-type mice even though lipid formation in adipocytes was inhibited. Gallo explains that the team noticed a change in how the mouse model responded to the bacteria after they performed the targeted deletion of the peptide—evidence of a link between the peptide and the immune response to C. acnes infection.

That last discovery serves to put together pieces first hinted at in a study that Gallo and his colleagues published in The Journal of Immunology in 2019, which demonstrated increased cathelicidin expression after retinoid treatment, to now reveal that retinoids treat and prevent acne in part by influencing the behavior and function of fibroblasts. Specifically, they inhibited lipid generation among fibroblasts undergoing adipogenesis without preventing the increased expression of adipogenesis-related antimicrobial peptides—a previously undiscovered therapeutic mechanism.

The study, Gallo tells The Scientist, “suggests that we have overlooked an important target to treat acne.”

These new findings are clinically interesting, Muravvej tells The Scientist, because they broaden the anatomical region that might be relevant to acne treatment. Typically, she explains, clinicians and researchers focus specifically on an infected hair follicle, which she calls “the primary anatomical site for acne,” and don’t examine the surrounding tissue implicated in the new study.

Mark Blaskovich, an infectious diseases researcher at the University of Queensland who didn’t work on the study, tells The Scientist that there “aren’t any direct potential therapeutic outcomes” of this paper, “just more of an understanding about why existing retinoid therapy may work.” However, he adds that retinoids can cause severe side effects, including impairing fetal development, so “improving our fundamental understanding may lead to ideas [for] how to target these pathways to come up with alternative treatments.”