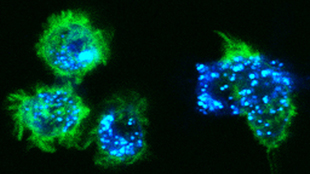 Langerhans cells, the main immune cell type found in the epidermis of the skin, facilitate carcinogenesis in neighboring epithelial cells by helping to metabolize toxins into even more mutagenic forms in mice, according to a study published today (Jan 5) in Science.

The study “shows a function for Langerhans cells that is outside of immune function,” said Stuart Yuspa, a senior investigator at the National Cancer Institute who researches carcinogenesis and epithelial differentiation but was not involved in the current research. This novel metabolic function turns out to be instrumental in the carcinogenesis of surrounding skin cells.

Discovered in 1868, Langerhans cells are primarily thought to behave as sentinels, initiating and regulating adaptive immune responses by processing and presenting antigens to T cells. However, there is...

Dermatologist and cancer immunologist Michael Girardi of the Yale School of Medicine has been particularly interested in investigating the role of Langerhans cells in carcinogenesis, as the cells have been shown to be capable of presenting tumor antigens to T cells.

Girardi and his colleagues employed a widely used, two-step skin cancer model that consists of dousing the skin of genetically susceptible mice with a potent carcinogen, the polyaromatic hydrocarbon 7,12-dimethylbenz[a]anthracene (DMBA). The mice are then repeatedly exposed to a compound that induces chronic proliferation and inflammation of epithelial cells, eventually resulting in the development of squamous cell carcinoma, a common skin cancer involving cells in the upper part of the epidermis. Around 90 percent of the cancerous cells in this model display a signature point mutation in codon 61 of the Hras gene—a mutation that activates the oncogenic potential of the gene and has been implicated in a variety of cancers.

But when the researchers carried out the procedure in mice with no Langerhans cells, they were surprised to see that the mice didn’t develop cancer. “It had the opposite effect of what we had hypothesized,” Girardi said. “Mice that were lacking Langerhans cells were almost completely resistant to carcinogenesis.”

The researchers suspected Langerhans cells might be involved in metabolizing DMBA, which “has a complex metabolism that is required for it to become the ultimate mutagen,” Yuspa explained. The “ultimate” mutagenic form of DMBA—DMBA-3,4-diol-1,2-epoxide (or DMBADE)—displays a strong affinity for, and thus causes point mutations in, codon 61 (CAA) of Hras in keratinocytes and is achieved after multiple steps by several enzymes expressed by both Langerhans cells and keratinocytes.

While DMBA is not found in the environment, many other polyaromatic hydrocarbons are prevalent in industrial pollutants, and at least 30 percent of human squamous cell carcinomas have activating Hras mutations. Thus, it may be possible that a similar mechanism may be occurring in a subset of human skin cancers that are caused by exposure to carcinogenic pollutants.

“This raises questions about what other functions Langerhans cells may have,” Yuspa said.