Tall trees with thick, lush canopies stretch as far as the eye can see. There’s a slight breeze blowing, birds are singing, and there’s a faint smell of forest—mostly fir trees and mushrooms. For a moment, people experiencing the scene may forget they’re in a research lab in Sweden helping scientists run an experiment to test how the features of natural environments affect physiological stress.

For many years now, there’s been a consensus that being in nature contributes to good physical and mental health, says Marcus Hedblom, an ecologist at the Swedish University of Agricultural Sciences who helped run the virtual reality experiment. Research has shown that viewing natural scenes can lower heart rate and restore focus, both of which are important for combatting physical and mental health disorders.

See “Time Spent in Nature Is Good for You”

Hedblom notes, however, that most of the existing studies on nature and health are based on self-evaluations where participants describe their subjective view of being in nature and how it made them feel. He and his colleagues wanted to identify the physiological mechanisms, and perhaps even the specific sensory stimuli, that could drive stress reduction in natural environments.

Based on a previous study that found that listening to clips of multiple bird species singing in an urban area had a stronger positive effect on people’s perception of the space than listening to one species alone, Hedblom and his colleagues hypothesized that an environment with rich biodiversity would reduce stress faster than a non-natural environment.

I honestly don’t know of any high-quality study that has been able to incorporate the smell sense.

To test the idea, they had 154 study participants experience one of three virtual environments: a city, a park, or a forest. The city scene featured buildings, the sound of traffic, and the smell of diesel, tar, and gunpowder (a roadbuilding ingredient). In the virtual park, there were trees and buildings, a single bird species—the willow warbler (Phylloscopus trochilus)—and the smell of grass, while the forest had a complex structure of trees, shrubs, and deadwood, along with the sounds of nine species of bird and a mixture of mushroom and fir scents.

The team showed the participants visual scenes with the virtual reality headset, had them wear earphones to hear the scenescapes’ sounds, and pumped the odors directly into the individuals’ nostrils via Teflon tubing and custom-made nose pieces. Each person was asked to rate how pleasant they found each of these stimuli on a scale from 1 to 100.

During the experiment, the researchers administered a small electric shock to stimulate a moderate physiological stress response, detectable as a slight rise in the level of electrical conductance of the participants’ skin. The team then tracked how quickly participants’ skin conductance levels rose and fell in each of the three environments to determine which was best at reducing stress. 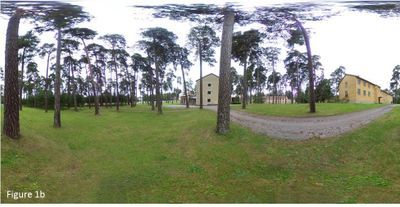 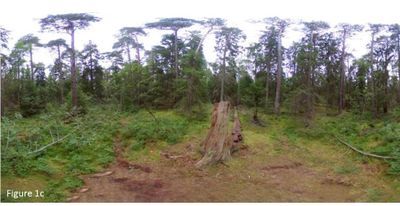 Right after the shock, the skin conductance of participants in the virtual park or forest did not increase as much as that of people in the cityscape. And, as the researchers expected, the forest and the park led to faster stress reduction after a shock than the city scene. But there wasn’t much difference in stress recovery between participants in the virtual forest versus those in the park, which Hedblom found slightly surprising, given the importance of environmental diversity in the earlier study. He and his colleagues want to investigate the discrepancy further.

Even more intriguing, he says, was the result that the rated pleasantness of smells was the strongest predictor of stress—with high pleasantness being associated with lower initial physiological stress responses and faster recovery—suggesting that smells might have a much more profound effect on reducing stress compared with sights and sounds. Adding the smell stimuli “is very exciting,” says green-space researcher Matilda van den Bosch of the University of British Columbia who was not involved in the study. “I honestly don’t know of any high-quality study that has been able to incorporate the smell sense.”

Smell is an intriguing sense because of its wiring in the brain, says study coauthor Johan Lundström, a neuropsychologist at Karolinska Institute in Sweden. It’s “unique among the senses,” he says, because it is not first processed by the thalamus—the brain’s switchboard. Instead, the smell signal is sent straight to the hypothalamus, a brain region involved in stress responses, in addition to the olfactory cortex, where odors are processed and perceived.

From the olfactory cortex, the signal is relayed to the amygdala, the brain region that detects threats, and to the hippocampus, which is responsible for forming and recalling memories. Bypassing the thalamus means that the hypothalamus, hippocampus, and amygdala can respond faster to smells than they do to other sensory inputs, Lundström says.

Such direct wiring, specifically to the hypothalamus, has led researchers to suspect that smell might regulate stress. But past studies that have tried to measure the impact of odor on stress have not used control odors or other sensory stimuli and therefore haven’t been able to determine if natural scents induce a general pleasant feeling during the experiment that then helps to reduce stress or if the odor itself directly drives the reduction.

The new study suggests that there’s at least some direct stress-reducing effect, Lundström says. Although the visual and auditory stimuli in natural environments got generally higher pleasantness ratings from participants than odor stimuli did, the natural odor stimuli had the greatest impact on physiological stress reduction.

The mechanisms by which natural smells regulate stress are unclear, says Gretchen Daily, an ecologist at Stanford University who studies green spaces but not involved in the virtual reality experiment. Some research suggests that certain plant chemicals might influence stress hormone regulation via the immune system, and so could be important to consider in the design of green spaces. “But it’s hard to say. Nobody knows yet really what mix of active ingredients are important for these spaces,” she says. “It’s all a really new and desperately needed area of research.”

This story is part of a series by The Scientist on how natural environments affect human health.

Click through to find out more about some of the other proposed mechanisms linking spending time in nature to physical and mental health benefits. 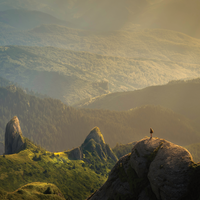