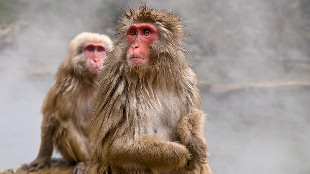 Macaca fuscataFLICKR, CHRISLIANG82Humans and other primates have a remarkable ability to detect snakes, even in a chaotic visual environment. Primate socioecologist Lynne Isbell has long theorized that snakes played a significant role in the evolutionary history of primates, and a study published in the Proceedings of the National Academy of Sciences today (October 28) provides the first neuroscientific evidence to support her hypothesis. Specifically, Isbell and her colleagues identify neurons in the Japanese macaque (Macaca fuscata) brain that respond selectively to images of snakes.

“This is the first evidence of snake-selective neurons in the primate brain that I’m aware of,” said Dartmouth College’s Seth Dobson, a biological anthropologist who was not involved in the work. “And it provides some of the strongest support for the general idea that predation has been a major factor shaping primate evolution.”

“The authors clearly show that there is some...

Isbell, a professor of anthropology at the University of California, Davis, first proposed her snake detection theory of primate evolution in 2006. In 2009, she published a book on the subject. In The Fruit, the Tree, and the Serpent, Isbell argued that predation pressure from snakes shaped primates’ brains and vision. Because the medial and the dorsal parts of the pulvinar are distinctive to primates, and because previous work implicates the brain region in the rapid processing of threatening visuals, Isbell suspected it might contain snake-sensitive neurons. And so, teaming up with neuroscientists from Japan and Brazil, she sought to test that notion.

The team directly recorded pulvinar neuronal activity via electrodes implanted into the brains of two adult macaques—one male, one female—as they were shown images of monkey faces, monkey hands, geometric shapes, and snakes. The brains of both monkeys—which were raised at a national monkey farm in Amami Island, Japan, and had no known encounters with snakes before the experiment—showed preferential activity of neurons in the medial and dorsolateral pulvinar to images of snakes, as compared with the other stimuli. Further, snakes elicited the fastest and strongest responses from these neurons.

“This is the first direct neuroscientific study of predictions from the snake detection theory,” Isbell told The Scientist. “It was very exciting [to] test.”

While the neurobiological evidence of pulvinar neuron responses to a potential predation threat is convincing, Dobson noted more work is needed to support a role for snakes in primate evolution. “A Japanese macaque is not a good model for the ancestor of primates—or the even ancestor of macaques, for that matter—so it will be difficult to generalize these results to other primates . . . without falling prey to the myth of the ‘typical primate,’” he told The Scientist in an e-mail. Dobson also suggested that perhaps the pulvinar of ancient primate ancestors may have been more specialized for snake detection than that of today’s high primates, including macaques, which have evolved the ability to process complex facial expressions, he said.

Hillary Rodman from Emory University, who was not involved in the work, said the study lends support for the existence of a so-called “fear module” in the primate brain—a construct that enables “quick responses to stimuli that signal danger, such as predators and threatening faces”—and that this “fear module should be selectively responsive to snakes.” However, there might be similarly responsive neurons in other areas of the brain as well, she added. “Since they [the authors] haven’t—to my knowledge—tested the same stimuli on various other parts of the visual system, they don’t have evidence that these putatively selective cells are a specialization of the ‘fear module’ at all,” she told The Scientist in an e-mail.

Isbell noted that in addition to other areas of the brain, she and her diverse colleagues would also like to test whether pulvinar or other neurons show selective activity in response to predators other than snakes. “Future collaborations of neuroscientists and evolutionary biologists will really advance our understanding of why animals do what they do,” she said.