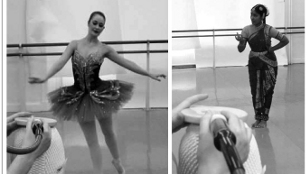 Watching a beautiful ballet can move viewers in more ways than one, according to a recent study in PLoS One.  When spectators watched dance, especially a type with which they were familiar, they put themselves in the place of the dancer, their brains showing activity similar to what researchers would expect to see in dancers.

In general empathy is considered critical for deeper appreciation of art. But it is unclear whether this kind of empathy, said first author Corinne Jola a research fellow from the University of Surrey in the United Kingdom, actually indicates a viewer’s level of enjoyment.

Earlier studies had suggested that spectators only mimicked movements they saw if they had been physically trained to perform those movements themselves. “Even without the physical expertise,” said Jola,...

Researchers showed study participants two roughly 4-minute long dance performances—one classical Indian and one ballet—as well as an acted skit, as their neural responses were recorded. (Performances used in the experiment can be viewed here.) Jola and her team recorded the viewer’s intentions to move with an indirect measure of brain activity. They placed a rubber swim cap on the viewers’ head, which they used to mark the placement of a magnetic coil.  The coil helped researchers amplify the signal that the brain sent to the arm muscles, which is where the researchers would record the intention to move. Jola and her colleagues could record the viewers' response to the movements they watched by recording the impulses in the spectator's arm.

Viewers who had watched either ballet or Indian dance many times before had higher responses to that dance form.  Those spectators who were naturally more empathic -- a characteristic measured by their responses to questions such as, “when I am reading a book I become completely immersed in the story and forget what is happening around me?”— also had higher responses.

The viewers’ mirroring of the performance wasn’t perfect, however.  If a dancer lifted her arm, the spectators might respond by triggering arm muscles responsible for lifting. But the dancer would have used many other muscle groups, such as those of the back, to send her arm upwards. “When I’m learning a dance, I don’t only see the end result of the movement, I can see the initiation of it as well,” said Madelyn Ho, a dancer with the Taylor 2, a Paul Taylor dance company in New York, who was not involved in the study.

When she watches dance, “I can almost feel myself experiencing the movement,” said Ho. But she switches between three mind sets. “I visualize someone else doing it, I can visualize myself doing it, and I can also visualize what the movement feels like without carrying out the movement,” she said. While that level of perception is unlikely to occur in a casual ballet-goer, the researchers showed that the response does exist, without any dance training.

It’s tempting to assume that those who watch dance regularly and mimic the movement they observe in their minds, might learn dance moves with more facility -- a secret fantasy of many a spectator. But Jola says that her study did not look at learning specifically, though it is a question she’s interested in pursuing.