Almost by definition, barnacles are immobile: these crustaceans cluster on surfaces such as whale heads, sea turtle shells, coastal rocks, and ship hulls. Once barnacle larvae mature, they travel on ocean currents in search of an anchoring place, preferentially settling in locations with good water flow, which often happen to be moving marine animals. Barnacles stick to host locations by secreting an adhesive cement, typically from a rigid plate on their undersides, that glues them to the surface. The general consensus has long been that barnacles then remain permanently cemented to their chosen surfaces, never to move again.

But a 2008 paper described an exception in barnacle immobility in the turtle barnacle Chelonibia testudinaria. This unexpected observation inspired John Zardus, a marine biologist and professor at The Citadel in South Carolina, and his colleagues to investigate barnacle locomotion on turtle shells. In a study published October 6 in Proceedings of the Royal Society B, they report that not only is Chelonibia testudinaria mobile, but it navigates purposefully toward locations of high water flow where the barnacles can more easily feed. Barnacles are classified as filter feeders, extending a small fiber-like fan appendage that captures particles and miniscule organisms from the surrounding seawater. They may be able to feed more effectively if they are positioned so that currents push food particles into their fan. Zardus and colleagues hypothesized that Chelonibia testudinaria position themselves to capture more food, and tested this idea in multiple aquarium tanks around the world. The researchers observed that the barnacles moved up to 78.6 mm over the course of a year and could change directions. They also found that the barnacles situated on turtle shells tended to move toward the turtle’s head, against the flow of water that passes as the turtle swims, which would give them access to stronger currents and thus more food.

The Scientist spoke with Zardus about why it matters that these barnacles can move around, and how these slow-moving animals travel over turtle shells.

The Scientist: What interested you in studying animal mobility?

John Zardus: I was originally interested in barnacles that live on other animals. My real question was, how did these barnacles find the host that they have to live on? There are some [barnacles] that are specialized for sea turtles, some for whales. It was just by accident that we came across this species that moves. We weren’t the first ones to discover this. There was a paper published in 2008 by Julia Moriarty. She had contacted me and sent me some photographs, asking, ‘Can barnacles that live on turtles move around?’ I answered, ‘No, no, barnacles don’t do that. Once they’re stuck, they’re there.’ She sent these photos of a time series of turtles over time with barnacles on them. She was using the barnacles to keep track of which turtle was which. She realized that the barnacles seemed to be moving. When I looked at her pictures, I was really blown away by it. We’ve been looking at how that phenomenon could happen ever since. We finally were able to conduct some laboratory experiments that completely confirmed it, and then started asking questions about why they do it.

TS: According to the paper, the study finds barnacles have directed movement for feeding purposes. Could you expand on what this means about the current understanding of barnacles?

You have to understand a little bit about how a barnacle operates. Basically, they’re like a shrimp in a shell, living upside down, with their head pointed down, and they kick their legs out to capture food. They’re filter feeders, feeding on whatever’s in the plankton. When they attach to a turtle, probably the big benefit [of attaching] is feeding currents. If you take a barnacle, and it’s living in still water, it will take its appendages and stroke them through the water very actively. But once you provide some flow, then they’ll just sit there and passively capture their food. It’s much easier for them to do. They don’t have to expend any energy. This species and others that live on mobile hosts are probably taking advantage of the flow for feeding.

The bottom [of a barnacle shell] is very flat. They sit right on the surface. How does it [move around]? It doesn’t have little legs down there. We don’t know how it’s doing it. We just know that it is [moving] very slowly. It takes weeks or months for it to travel any significant distance. Most barnacles, on their bottom, secrete a basal plate that is made of calcium carbonate, and it’s solid. But this one doesn’t. It has a membrane. There’s a few [barnacles] that are like this with a soft bottom. We’re pretty sure that that’s an important component of the movement.

TS: What surprised you about this ability of barnacles?

JZ: We were pretty sure it was reproduction, but we were wrong. It turned out to be for feeding.

Let me tell you a little about reproduction in barnacles. They are mostly hermaphroditic. They have both male and female components, but they can’t fertilize themselves. They need to have a neighbor. It’s very typical for barnacles to live in clusters so that they can fertilize their neighbor next door. They have direct insemination, with the world’s largest penis per body size. They reach out and copulate with their next-door neighbors. We thought, ‘Ah, these guys are moving around so that they can get close together for reproduction.’

We set up some experiments where we put them in different arrangements, tightly clustered together or separated far apart. We figured that in the ones that were separated far apart, that over time, they would move closer together. But they didn’t. They ended up moving randomly. Only when we put flow on them from the jet in the aquarium did they start moving, and they moved towards the flow.

When you looked at them on sea turtles in the wild, they were mostly moving toward the head of the turtle or towards the anterior part of the turtle shell. That’s going to put them in higher flow. It seems to be that they’re really responding to flow, and that is probably more for feeding, and they don’t seem to be doing it so much for reproduction.

I also have another study that’s in press right now with this species demonstrating that it’s the only barnacle we know of that does not do active feeding. If you give them no flow, a barnacle will typically stroke its appendages to get food. If you put this one with no flow, it does nothing. It’ll die. It will never even actively feed. It relies 100 percent on passive feeding, so it really has to be in a high flow environment all the time. Which makes sense if you’re living on a turtle—you’re going to get a lot of flow.

One of the reasons it might not be so concerned about getting close together with other individuals is [this barnacle] has dwarf males that live attached to it. They’re really tiny, only a few millimeters in size, and a single hermaphrodite . . . may have 30 to 40 of what they call complemental males. They’re tiny individuals and they live in these crevices. They specifically settle in there and then they just provide sperm to the central hermaphrodite. If [the hermaphrodites are] carrying their own males, they probably don’t care if they’re near a neighbor or not because they’ve already got what they need. This one has a really cool biology. All sorts of interesting things going on. 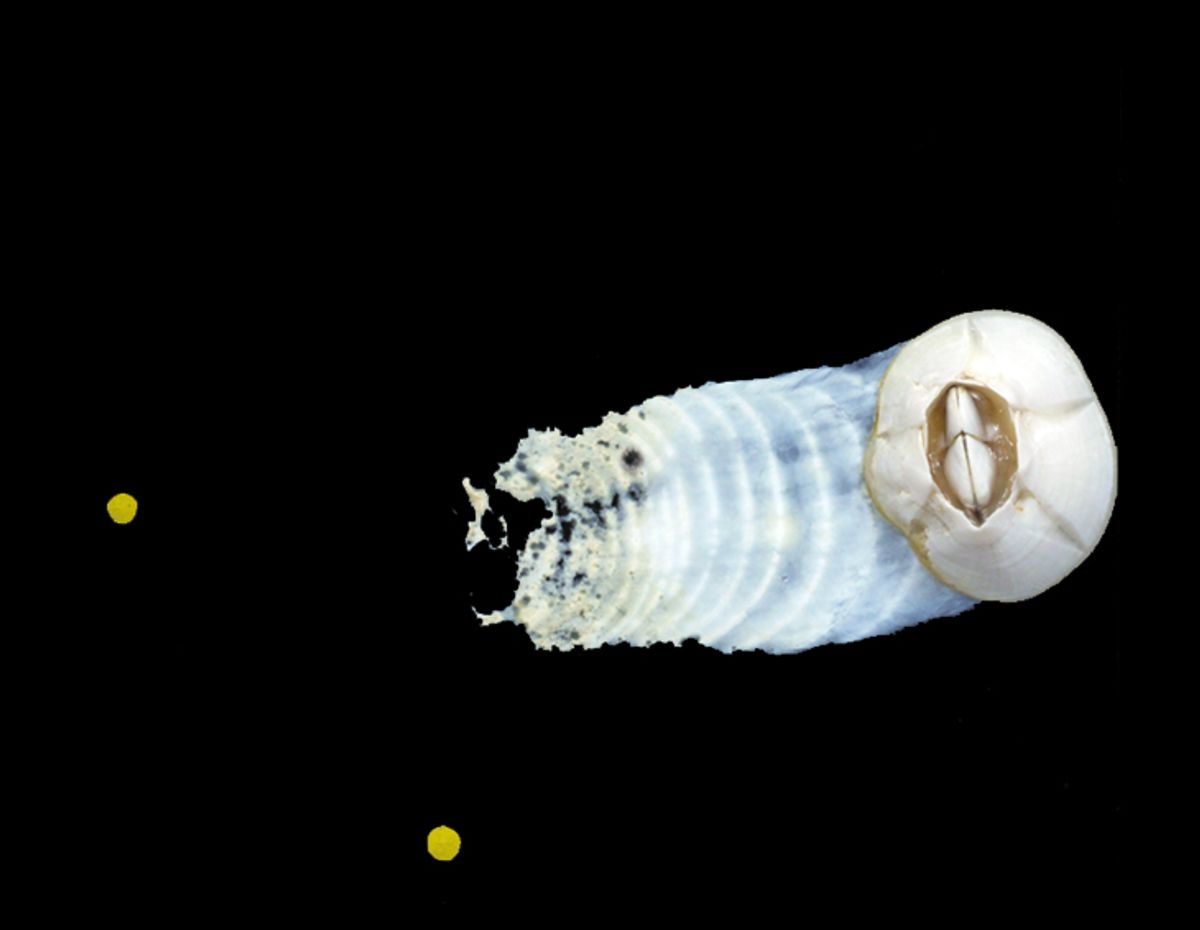 TS: When you were observing these barnacles in the aquariums, were there any challenges that arose with the experiments?

JZ: We had to figure out how to get them attached to surfaces in the lab. We tried two approaches in my lab here in South Carolina. I started raising them from the larval stage, and I could get them to attach onto PVC pipe, and then grow them in the lab just fine. But for whatever reason, those that lived on PVC didn’t move.

My colleague in Taiwan, Benny Chan, tried a different approach. He found some crabs that this barnacle was living on. He would catch the crabs, bring them into the lab, euthanize the crabs, cut the crab shell around the base of the barnacle, and then let it sit for a few days until the crab shell dissolved. Once it was dissolved, he could take the barnacle that was intact and healthy, put it onto a plexiglass panel, and let it sit for a few days. It would create some new glue and cement itself onto it. That was the real success. Once we got those glued onto glass panels, those were the ones that we could put into flow and move them around from aquarium to aquarium for the different experiments and do time lapse studies on them.

TS: Do you think that your findings could be extended to perhaps other types of barnacles or sessile animal models?

JZ: I think we should certainly look for it. I don’t think we’re going to find it happening very much. Do I think other barnacles are doing this? I doubt it. Maybe under very special circumstances. We would need to look at those. I think some of the prerequisites for this guy to move is it’s got this very flat, broad base with a membranous bottom. There aren’t too many barnacles that are like that. Those would be the candidates that I think we might look at.

Regarding other animals, there was a recent paper that came out about some deep-sea sponges that they found moving. Again, they don’t know how, but they could see tracks in the sediment or on the surface where the sponges had travelled. That was unexpected. I think it would be interesting to look in other places, but I don’t think it’s going to be widespread phenomenon.

TS: Where do you see the future of the research going? What would you like to explore next with these barnacles?

JZ: I think the big question people really want to know is, how do they do this? What’s the mechanism? That’s where we’re headed. We don’t have a lot of tangible evidence for how it’s happening right now.

TS: Do you have any ideas or any suspicions of how barnacles could be moving?

JZ: I think it’s got to do with the glue. Barnacles, when they first attach to the substratum—almost all species—they start secreting a glue that permanently fixes them in place, and then they continue to secrete that glue throughout their lifetime as they get larger and larger. This one’s doing the same thing, but it must also be dissolving its glue. We want to look at that and see if somehow the glue is being laid down, then the animal is somehow severing that connection, and then reapplying the glue in periodic intervals.

We also want to examine this glue more carefully. We know that it looks a little different from some of the other glues we’ve seen in barnacles. It gets put down in different layers and the composition is different just looking under the electron microscope. That’s never been reported in barnacle glue before. That’s one part that we think is going to be important to figuring out.