A large-scale shortage of respirators and face shields threatens progress in some labs that are currently trying to ramp up their studies of SARS-CoV-2.

Virologist Benjamin tenOever and his colleagues at the Icahn School of Medicine at Mount Sinai in New York are racing to find drugs that work against SARS-CoV-2. The lab, which until recently focused on a large-scale research project studying transmission of influenza virus between ferrets, is now using the animals to see if already-approved drugs show promise in stalling coronavirus replication or improving symptoms of infected animals. Should any treatment show signs of working, it’ll be considered for use in patients battling COVID-19.

Work with the live virus has to be conducted in biosafety level-3 (BSL-3) labs, carefully regulated facilities where workers are required to wear a suite of gear to protect themselves and people who come into contact with them. Facial protection typically comes in two forms: the preferred choice is a powered air-purifying respirator (PAPR)—a reusable device that pumps filtered air into a face mask that covers the entire head. The second, sometimes used for less-demanding BSL-3 work, is the N95 respirator, a single-use mask that seals tightly around the nose and mouth and filters out microbes and particles, which some coronavirus researchers wear with a disposable face shield for additional protection.

TenOever has enough PAPRs for the two researchers in his lab doing the animal experiments. But over the last few weeks, he’s found himself low on both N95s and disposable face shields, which the other six lab members need to do the less-risky work of pre-screening drugs in monkey cells and human organoid models before they’re administered to ferrets. His major suppliers are backordered by months. After appeals on social media, he is soon to receive some equipment donations from other researchers who had surplus supplies, as well as a batch of 1,000 masks bought back from online price gougers with funds raised through a GoFundMe page.

The protective equipment is the rate-limiting step for us to get going.

“Everybody is really trying to help in any way they can. That’s really great to see,” says a relieved tenOever. Without those donations, he wouldn’t have been able to continue research. He had reached out to the Federal Emergency Management Agency (FEMA), which is involved in distributing personal protective equipment on behalf of the government, but didn’t hear back. “I’m now okay. Not because FEMA or anything the government did for me, but because of a grassroots movement and simply buying them all back on eBay.”

Respirators appear to be hardest hit by equipment supply shortages. That’s likely the result of mass purchasing for healthcare workers across the country who are now working in contaminated settings, thereby rapidly draining a limited supply that is usually reserved for researchers working in biosafety labs. The situation may also have been exacerbated through panic buying sprees of N95 masks by the public. Although there are signs that supply is catching up with demand, for now, the shortages are a major challenge for some labs, particularly at a time when many researchers are trying to scale up coronavirus research to deliver urgently-needed answers about the virus and find drugs against it.

“It is a difficult and unfortunate situation that is unnecessary,” says Melanie Ott, a virologist at the San Francisco–based Gladstone Institutes. “If [only] we had a bit more foresight . . . we would have been better prepared.” 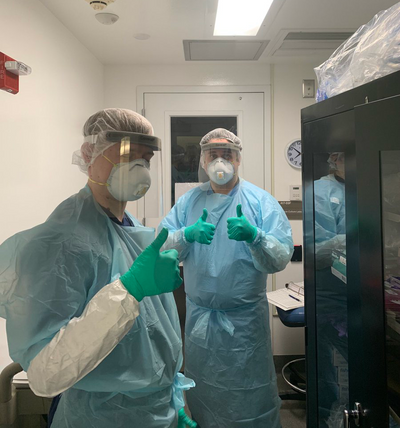 TenOever says he saw online stock of respirators sold by scientific distributors begin to vanish once cases surfaced in Iran and Italy roughly a month ago, hinting at a mass purchasing of protective equipment. Soon, equipment was backordered by months.

For some labs looking to launch new research projects, the shortages have been prohibitive. In February, Ott, who studies influenza and blood-borne pathogens, decided to start several projects on SARS-CoV-2. One, for instance, will be to develop a CRISPR-based diagnostic test in collaboration with genome editing pioneer Jennifer Doudna of the University of California, Berkeley, and others. That meant moving into a BSL-3 lab. Luckily, the Gladstone Institutes had one that wasn’t being actively used, so Ott rushed to get it certified and inspected.

To start her experiments, she still needs protective equipment for herself and her colleagues, but PAPR respirators, full-body Tyvek suits, and other gear are in short supply, she says. “I would say that the protective equipment is the rate-limiting step for us to get going. And so we are waiting and trying to get equipment wherever we can get it.” For the moment, she’s working in a different BSL-3 lab at the University of California, San Francisco, where she is a professor, and where existing supplies of protective gear are limited. “The worry is that we have to basically ration the work because we’re not sure how far we can go with all the equipment that we [currently] have.”

Others are testing unconventional types of protective gear to avoid shortages. Gary Whittaker’s lab at Cornell University received samples of SARS-CoV-2 a few weeks ago and together with other labs, is in the process of launching a number of mouse experiments to study the mechanisms of virus infection, alongside testing drugs and improving diagnostic tools. The team has been sharing four PAPRs between five researchers, disinfecting them between swaps, says virologist Javier Jaimes, a postdoc in Whittaker’s lab. But because another two people will be joining the lab soon to help ramp up research, the team anticipates that there soon won’t be enough equipment for everyone.

Because supplies of N95 masks—a possible alternative to PAPRs—were dwindling across campus, the lab decided to test a new respirator type, called an elastomeric half-facepiece respirator, which is reusable and is thought to offer the same protection as a PAPR, but not an ideal choice because it doesn’t cover the whole face, and it’s uncomfortable to wear, Jaimes says. “The filters are heavy and you have to tie them really tight to prevent anything to get into your nose, into your mouth.”

Once new researchers arrive, the lab will reserve the PAPRs for those who are doing critical experiments, and the rest will be using the half-facepiece respirators. Jaimes says he doesn’t think those stocks will last for long, either. “I think they will also be in shortage soon because everybody that is facing the problem with the PAPRs is going to switch to N95s. If they cannot find N95s they of course will switch to another system like the one that we are testing now,” he says.

Some have suggested treating N95 masks with virus-killing gamma radiation so they could be reused, but that would require bringing a radiation machine to the lab because used masks can’t be taken outside of it. Others are looking into 3-D printing the disposable face shields, but it’s not yet clear if such products would be allowed in the BSL-3 lab, tenOever says. Luckily, he’s not yet had to resort to such options. With the donations, his lab is now well-stocked for another few months—“hopefully until the end of this pandemic.”

Stocking up on protective gear

Some other labs say they’re well-stocked for the time being, such as virologist Matthew Frieman of the University of Maryland School of Medicine, microbiologist Vineet Menachery of the Galveston National Laboratory at the University of Texas Medical Branch (UTMB), and University of Iowa virologist Stanley Perlman, who is currently developing animal models to study the pathology of the virus and immune responses to it. “To conserve equipment and avoid shortages in the future, we are minimizing the number of personnel who enter the lab on a given day and being judicious in our choice of experiments. We also modestly changed our protocols to decrease [equipment] usage,” Perlman tells The Scientist in an email.

Lisa Gralinski, a virologist at the University of North Carolina at Chapel Hill, says that when her group began ramping up SARS-CoV-2 research in January, they started to build backup supplies of gloves, Tyvek layers, and extra hoods for their team’s PAPRs. For now, they’re still well-stocked. “That being said, we are working at an unprecedented pace and can only hope that what we have on hand and on order is enough to maintain work in the months ahead,” she writes in an email.

Chris Toomes, who manages UTMB’s equipment supplies, says they started stocking up in January while the virus was still confined to China, knowing that “our teams were going to be doing some research on this,” he says. Toomes is making backup plans, should UTMB be affected by shortages in the future, he says, stocking up on reusable gear, such as PAPRs, and redistributing protective equipment supplies from labs currently slowing down on research to those studying SARS-CoV-2.

Toomes says he’s “cautiously optimistic” that supply chains are slowly beginning to catch up with the burgeoning demand, largely driven by the needs of healthcare workers at the frontlines of the coronavirus pandemic. “We’re starting to see people that are actually able to ship and provide stuff to folks from across the country [and] from across the globe,” he says.

3M, which makes N95 respiratory masks as well as PAPRs, announced in late March it will be working together with Ford to manufacture more PAPRs and is also ramping up production of N95 masks. Possibly also easing demand, several state governors have managed to procure equipment through the US Strategic National Stockpile, which harbored around 13 million N95 respiratory masks before the pandemic. “But some governors reported receiving less protective gear than they requested,” according to the The New York Times, and The Washington Post reports today that the national stockpile is nearly depleted.

In a statement sent to The Scientist, a FEMA spokesperson writes that together with other agencies, FEMA is “working to meet demands for personal protective equipment (PPE) through new acquisition, DOD allocation, or Strategic National Stockpile sources.” The National Institutes of Health, which is funding much of the research on SARS-CoV-2, did not respond to a request for comment by deadline.

With insufficient PAPRs and N95s to go around to both protect doctors and nurses treating COVID-19 patients as well as the researchers trying to study the virus and identify potentially life-saving treatments, this raises the difficult question of who takes priority. “I’m a little torn by the fact that equipment and masks and stuff would probably be better served to give to the people on the medical front lines. It’s not to say I don’t think what we’re doing is important,” says tenOever. “It’s just a really hard line for me to draw ethically.”

Toomes, who manages the supplies both of UTMB’s healthcare providers and infectious disease researchers, says he hopes he never has to make that call. “Nobody can tell exactly what’s going to happen in the future, but we are doing everything possible to ensure that we never have to get to that to that point,” he says. “Research people need to have their gear, they need to be able to focus on fixing this problem at a research level and . . . I have every faith that our researchers are going to [help] do that. We just need to provide them with the gear they need and take that off the plate for them.”