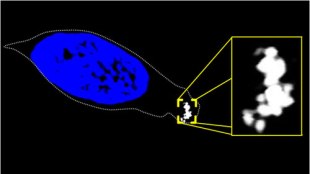 Magnetite inclusion in a cellHERVE CADIOU, UNIVERSITY OF CAMBRIDGE

Magnetic orientation was first documented in birds in the 1960s, and has since been found in a wide range of animals, but the underlying mechanisms have been elusive. Now, usinga new method detailed today (July 9) in Proceedings of the National Academy of Sciences, researchers have isolated magnetic cells from the olfactory epithelium of trout, and identified the mineral magnetite as the component that reacts to a changing magnetic field.

"[The authors] show really unequivocally that there is magnetite in these cells," said Wolfgang Wiltschko from Goethe University in Frankfurt, who was not involved in the study. Previous searches for magnetic cells have been hampered by possible contamination—either from non-magnetic iron triggering false positives, or from magnetic bacteria, in which magnetite has previously been isolated.

Isolating magnetic receptor cells has also been difficult because there is no sensory organ...

The new study, led by Michael Winklhofer of Ludwig-Maximilians University, Munich, proves that the trout epithelium are in fact magnetic receptor cells, by subjecting dissected cells to a rotating magnetic field, in which the position of north is constantly changing. Cells that contain magnetic material will move in this situation, following the northern fluctuations, while non-magnetic cells are unaffected. Using this method, the researchers identified one cell in every 10,000 in the region that responds to the magnetic field.

While this seems like a very small number, totaling perhaps only 100 cells per animal, Winklhofer said they were surprised at how potent the cells were. In a 10-20 micron cell, the concentrated clump magnetite crystals, known as an inclusion,was around 1 micron wide. It takes a large number of magnetite particles to reach this size, giving the cell a strong sensitivity to the magnetic field.

The crystals of magnetite formed a big enough inclusion to be identified under a light microscope, where the researchers could see that they were attached to the cell membrane. Winklhofer and colleagues conclude a likely explanation is that when the magnetite particles align to the magnetic field, as a compass needle does, they put physical pressure on the cell membrane, which initiates the nervous impulse that is processed by the brain.

It is still unclear, however, if these cells are using the magnetite as part of a process to detect the magnetic field, Wiltschko warned."Whether these cells are receptor cells [the authors] cannot say because they are dissociated from the tissue," he said. "It is very likely that they are, but for a neurobiologist [the presence of magnetite] does not say that they are involved in the reception of the magnetic field."

Fortunately, the new method should open the door to answering that question, said Ken Lohman of the University of North Carolina, who was not involved in the study. "The important implication is that this technique can now be applied in various animals and is likely to help researchers identify magnetite-containing cells more easily," Lohman wrote in an email to The Scientist. "This, in turn, will enable studies of these cells to be carried out, with a view toward determining if they function as magnetic field detectors and, if so, how."

One controversy waiting to be solved by this method is the location of magnetic receptor cells in pigeons. A study published in 2007 identified six patches of cells rich in iron in the bird's beak, which they claimed acted as magnetic receptors. Four years later, a different team analyzed thin slices of the bird-beak tissue, and their findings, published December 2011 in Nature, called the original claim into question. The researchers found that some birds contained few or no iron-containing cell patches, and those that did had patches  associated with sites of injury, suggesting the iron was a product of macrophage action, of which non-magnetic iron is a byproduct. The new method published today by Winklhofer and colleagues identifies only magnetic iron, and so would exclude iron associated with macrophages.

"Eventually, the long-term goal would be to identify this set of genes [associated with magnetoreception] and compare it to the human genome," Winklhofer said. "It's not really clear if humans have the ability to produce magnetite crystals in their cells."