When astronauts go into microgravity environments in space, they experience a range of physiological changes in many parts of the body. A team of researchers led by Joseph Wu, the director of the Stanford Cardiovascular Institute, recently sent cardiomyocytes made from human induced pluripotent stem cells (iPSCs) up to the International Space Station with astronauts in order to study changes in the cells. Through RNA sequencing, they found that many genes in the cells were expressed differently than ones that did not go into space, including genes for mitochondria metabolism. Their results were published in Stem Cell Reports today (November 7).

The increase in mitochondrial metabolism gene activity found in heart cells in microgravity has also been found in previous microgravity studies of blood cells, suggesting that certain cellular responses to spaceflight can occur across multiple types of cells, the authors write in the study. Wu tells The Scientist it’s possible that the upregulation could be associated with an attempt by the cells to mitigate mitochondrial dysfunction associated with cardiovascular disease, which astronauts are at increased risk for, but further research will be necessary to understand the observation from his latest experiment.

The study is a starting point for understanding the genetic basis of the heart alterations astronauts experience. “One of the biggest changes that the cardiovascular system sees in spaceflight is the redistribution of blood, because there isn’t gravity pulling blood down to your feet,” Alexa Wnorowski, a graduate student in Wu’s lab, tells The Scientist. The heart doesn’t have to work as hard to pump blood throughout the body, she says, which can cause the organ’s muscle to atrophy. In addition, the heart changes shape. “After long days in microgravity, it becomes more rounded,” says Wnorowski. The reason for this is unknown, but it could be due to a lack of gravity that normally pulls the heart downward.

The researchers wanted to study microgravity’s effects using heart cells, but “it’s really hard to get cardiomyocytes from a human,” says Wnorowski. The only options to obtain cells are from the surgically removed heart of a heart failure patient or from a biopsy. Instead, they collected peripheral blood mononuclear cells from three healthy individuals, induced the cells to become iPSCs, and turned them into cardiomyocytes. The stem cell–derived heart cells were then flown up to the International Space Station (ISS) in July 2016, where virologist-turned-astronaut Kate Rubins and other astronauts maintained the cell cultures for 5.5 weeks before sending them back down to Earth.

See “Kate Rubins Was the First to Sequence DNA in Space”

Once the cells were on the ground, Wu’s team analyzed them to determine what changes had occurred. Although the researchers did not observe significant differences in contractile muscle protein abundance or heart cell shape, they did find that 2,635 genes were differentially expressed. Some genes were upregulated, while others were downregulated.

The biggest category of more-active genes was related to mitochondrial functioning, and this increase in gene expression persisted for at least 10 days after landing. The researchers also found changes in calcium recycling and myofilament gene expression. The effects of these changes are unclear, but the findings “suggest that, even at the cellular level, human cardiomyocytes can functionally respond to changes in apparent gravity,” the authors write in the paper.

In the future, the lab plans to send 3D stem cell–derived heart tissue structures with multiple cell types into space. The study published today “is just a baby step in terms of trying to understand the biology, especially in the cardiac system, of microgravity space travel,” Wu tells The Scientist. “We’re just at the very beginning of space frontier research, and hopefully this type of study will inspire other people to think about additional studies,” he says.

“Because spaceflight offers enormous logistical challenges to biological experimentation with whole organisms, such as rodents, it behooves us to develop higher-fidelity and throughput human cell and tissue models to study spaceflight factors,” Eduardo Almeida, a senior scientist at NASA Ames Research Center who was not involved with the study, tells The Scientist. “Wu’s study breaks ground in this area both by demonstrating the feasibility of these next-generation cell biology studies on the ISS, as well as by reporting new findings on how the absence of gravity alters key aspects of cardiomyocyte function.”

See “Q&A: Organs on a Chip Head to the International Space Station” 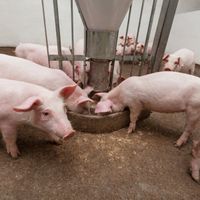