It took psychiatrist Staci Gruber four years to wrangle approval to run a clinical trial testing whether a liquid cannabinol product administered orally can ease symptoms of anxiety. She had to get the okay from the US Food and Drug Administration, the Drug Enforcement Administration, and the National Institute on Drug Abuse.

Cannabis research, she tells The Scientist, is “not for the faint of heart.”

Eleven states and Washington, DC, have legalized recreational and medical marijuana use, with Illinois being the latest to join in January 2020, and 19 have legalized medical marijuana. It is a popular drug—a survey of nearly 170,000 adults published today (September 20) in JAMA reports that around 8 percent of respondents use marijuana, and nearly 4 percent do so daily. Yet despite its ubiquity in American society, researchers say their hands remain tied by a decades-old federal law classifying...

What’s frustrating for many researchers, says Gruber, who works at McLean Hospital, a Harvard Medical School affiliate, is that individuals, including her patients, can go to local dispensaries to obtain marijuana to ease pain or anxiety, but in order to investigate the compound’s effects, whether detrimental or beneficial, scientists have to obtain marijuana material used in clinical trials through NIDA, the National Institute on Drug Abuse, because of cannabis’s federal illegality. That means there’s a widening window between cannabis use and scientists’ knowledge of how cannabis’s compounds affect the brain and body, Gruber says.

Last month, based on evidence showing cannabis harms the brains of adolescents and unborn babies, the US Surgeon General warned teens and pregnant mothers not to use marijuana—a reminder of the federal government’s tight grip on the drug. But there are some signs that the feds might be loosening up.

For example, more than a year ago,  the US Food and Drug Administration (FDA) approved the use of Epidiolex—a cannabis-based drug—to treat epilepsy, a move that gives a marijuana product an accepted federal use. In late 2018, the Agriculture Improvement Act changed the definition of marijuana to exclude “hemp”—plant material that contains 0.3 percent or less delta-9 THC (tetrahydrocannabinol, the psychoactive ingredient in weed). That means hemp, including the plant and cannabidiol (CBD) preparations at or below that level of THC, are not controlled substances and are therefore easier to grow and study. And, On Thursday (September 20), the National Center for Complementary and Integrative Health, part of the National Institutes of Health, announced $3 million in funding to study the ability of CBD and other phytochemicals in cannabis, excluding THC, to relieve pain.

But as promising as those steps are, Gruber says, “there’s a long way to go.”

How legalization changed research: from Canada to California

Canada legalized recreational marijuana in October 2018, a move many researchers suggested would benefit research—and it may, says Kari Kramp, a principal investigator in the Applied Research Centre for Natural Products and Medical Cannabis lab at Loyalist College in Ontario. Health Canada, which oversees the regulation of scientific studies of cannabis in the country, has been open to conversations about what questions researchers are interested in pursuing, Kramp says, though, she notes, research is still highly regulated, so legalization “hasn’t removed all of the barriers.”

One of the main issues is the ability of Health Canada to process and approve all of the applications that have flowed for licenses to study cannabis since it was legalized for recreation use, Science reports. The glut of applications that Health Canada is slogging through is a sign that a growing number of researchers want to study cannabis, whether it’s the products themselves, as Kramp and colleagues study, or the basic physiology, which interests researchers funded by the Canadian Institutes of Health Research (CIHR) at universities and institutions across the country.

With cannabis legalization in Canada, funding for research has been on the rise. In 2017, CIHR announced $1.4 million in funding to support studies on the biological and social effects of cannabis regulation. In 2018, the agency and its partners invested $3 million in cannabis research on prenatal exposure, cannabis use and opioid use, and mental health, in addition to a separate $4.32 million grant to investigate whether cannabis could provide a safe and effective treatment for Canadian Armed Forces personnel and veterans suffering from post-traumatic stress disorder.

See “Canada Could Come to the Fore in Cannabis Research”

Kramp and her colleagues started working on gaining Health Canada’s approval to study cannabis in 2014—long before legalization legislation was set into motion—and were granted permission in 2017, with their research focused on the analysis of cannabis products. Then, after legalization in 2018, the lab migrated its research licenses to conform with new science regulations. Under the new system, there is much more flexibility in the work the team can do because reviews became the onus of the institution rather than of Health Canada, Kramp explains. Still, keeping up with and comprehending all of the new regulations is a daunting task, she says; there will be even more in October when regulations for research come out for concentrate, topical, and edible cannabis products. “Again, that’ll be a new learning curve.”

There’s a widening window between cannabis use and scientists’ knowledge of how cannabis’s compounds affect the brain and body.

Although national legalization seems to be aiding researchers in Canada, state legalizations in the US haven’t had such a dramatic effect.

As early as 1992, Donald Abrams, an oncologist at the University of California, San Francisco, became one of the first and still one of the few researchers to conduct human clinical trials with cannabis. There were “many, many roadblocks,” he says. “Every time I’d turn around there’d be a roadblock.” The main challenge was that studies approved by the federal agencies, specifically NIDA, were focused on investigating the potential harm of cannabis, not its possible medical benefits.

In 1996, California became the first state to legalize medical marijuana, but the change in state laws didn’t ease the difficulty Abrams faced in obtaining cannabis to study its safety in patients with HIV, though he did figure out a way to gain approval to study its ability to reduce neuropathic pain in a similar set of patients. He says that in states where cannabis is legal, researchers can do observational studies, tracking the effects of marijuana use on patients or those using it recreationally, however, there’s no consistency in the products used, making it hard to determine overall health trends from individuals using different types of cannabis and its derivative products.

Despite the roadblocks, Abrams has continued working through NIDA, collaborating on a recently completed clinical trial investigating the safety and potential effectiveness of inhaled vaporized cannabis for chronic pain in patients with sickle cell disease. That type of research provided the basis for the National Academies of Science, Engineering, and Medicine to report in 2017 that cannabis was effective for “what we call the big three,” Gruber says—chronic pain, nausea associated with chemotherapy, and muscle stiffness and spasms related to multiple sclerosis—plus childhood seizures. Most of the document, however, focuses on the ill effects of the drug, with only a short section on its potential benefits—a reflection of where research has been focused, notes Abrams, who was on the committee that wrote the report.

Gruber’s newly approved study, conducted in Massachusetts, another state that’s legalized cannabis, is step toward broadening research on medical marijuana to include one of the most common mental health conditions in the US—anxiety. And, she says, the framing of the study as a therapeutic for anxiety is important to note because it suggests the FDA, at least, is beginning to recognize the distinction between recreational cannabis and medical marijuana.

“Recreational consumers are looking for products that are high in THC because their goal is to change their current state of being,” Gruber says. To get that high, concentrations of THC in recreational products are on the rise: they averaged around 4 percent in 1995 and now are as high as 17–18 percent nationally, with wax, butter, and other variations reaching as high as 98 percent THC.

Medical marijuana users, however, aren’t interested in getting high; instead, they are seeking symptom relief—whether it be to reduce pain or anxiety, and often aren’t using extremely high concentrations of THC. These individuals, Gruber explains, tend to be older, well beyond the years when their brains are developing, which is considered the most vulnerable time for cannabis exposure. In fact, Gruber’s work has shown that her patients’ executive function—the ability to plan, focus, and remember—appears to improve with marijuana use.

Cannabis by the numbers

In the US, the number of researchers studying cannabis has slowly crept up as more states have legalized it. Any cannabis product used in a clinical trial has to be provided by NIDA from its supplier at the University of Mississippi. According to NIDA, in 2010, nine researchers requested cannabis for studies; 14 in 2016, 21 in 2017, and 20 in 2018. As of April 2019, nine investigators have applied to study and receive cannabis material, according to an emailed statement from the agency.

It’s not quite the flurry of research activity seen in Canada, but the numbers of researchers in the US aren’t exactly clear. The DEA, for example, tells The Scientist in an email that in the last two years, the total number of individuals registered by the agency to conduct research with marijuana, its extracts and derivatives, and THC has increased by more than 40 percent, from 384 in January 2017 to 542 in January 2019. “It may be difficult to rectify NIDA and DEA’s marijuana research numbers. NIDA serves as the primary but not sole source for material,” says Barbara Carreno, a spokesperson for the agency, in an email. “Additionally, other lawful sources may be providing extracts if what [scientists] want to research is not available from NIDA. For example, CBD researchers are obtaining their material from registered manufacturers.” 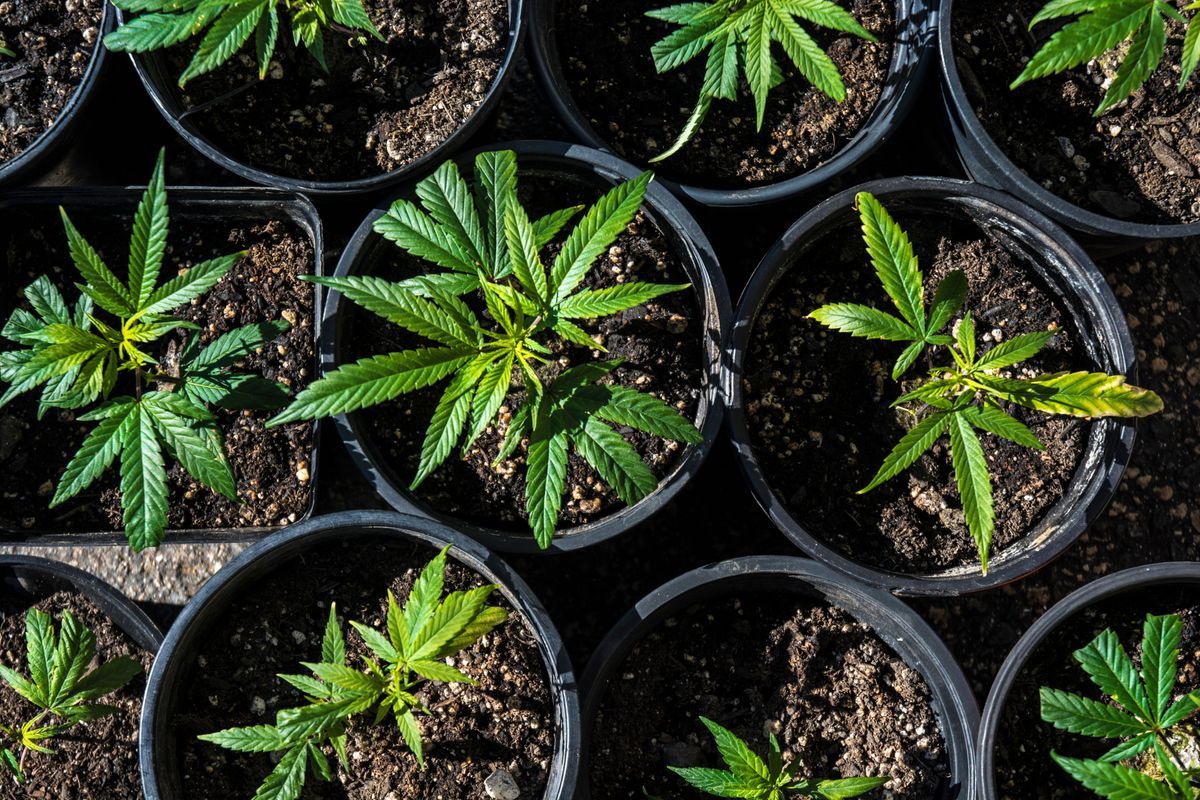 When it comes to obtaining cannabis plant material for clinical trials, however, one complaint among US researchers about using NIDA’s supplier is how different the product sold there is from what’s sold at dispensaries and on the street. The non-research-related products are potent, often containing up to 75 percent THC. The cannabis that researchers are legally allowed to use to assess the safety of the drug have way lower concentrations, around 10 percent THC, studies have shown.

Nearly three years ago, when the first study showing differences between the pot used in studies and what’s available commercially was published, the DEA said it would consider applications for new suppliers of research-grade marijuana. In 2018, it approved the import of a cannabinoid study drug from the company Tilray for a clinical trial on tremors. But nothing else happened until August, when the agency announced it would create new regulations for suppliers and then review pending applications.

Gruber says the promise, if kept, could be extremely valuable to researchers. “We need to have research looking at the different impact of concentrated products versus whole flower products, and on our recreational folks, especially those who are at the greatest risk,” she says. “We need all sorts of studies of efficacy and safety with regard to medical cannabis in terms of different types of administration of different products.” There are also myriad strains of cannabis, and interactions between THC, CBD, and other phytochemicals, such a terpenes, that need to be investigated.