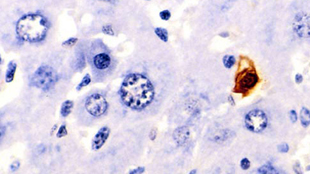 Human embryonic stem cells give a whole new meaning to the phrase “taking one for the team.” Unlike any other known human cell type, hESCs are primed to immediately throw themselves on the sword if they experience any DNA damage, according to research published online today (May 3) in Molecular Cell.

Human embryonic stem cells (hESCs) form the early embryo and eventually give rise to every cell type in the body. Because of this, a rapid self-destruct mechanism activated by DNA damage may prevent potentially dangerous mutations from spreading through the developing organism, the authors concluded.

The data is “convincing,” wrote Christopher Navara, who studies stem cells at the University of Texas at San Antonio and was not involved in the research, in an email to The Scientist. “hES cells have adopted a number of unique...

Four years ago, Mohanish Deshmukh and colleagues at the University of North Carolina at Chapel Hill found that neurons—which, unlike stem cells, do not divide—restrict apoptosis, or cell death, allowing them to survive through periods of stress or cell damage that might otherwise stimulate apoptosis. To explore apoptosis at the other end of the development spectrum, the researchers next analyzed human ESCs, which constantly divide.

First, the team doused hESCs in a chemotherapy drug that causes DNA damage. Almost 100 percent of the hESCs died in just 5 hours, compared to 24 hours for fibroblasts. The finding is “consistent with what we and others have observed regarding sensitivity to DNA damage in hES cells,” said Navara.

When Deshmukh’s team stressed the ESCs in other ways, such as damaging the cytoskeleton, the cells did not die as quickly, demonstrating their acute sensitivity to DNA damage. “DNA damage is the one insult these embryonic stem calls can’t tolerate,” said Deshmukh. “It’s catastrophic for them. Any mutations they occur will be propagated rapidly through the system.”

Apoptosis is traditionally a lengthy process that involves the activation of a protein called Bax, which travels to the mitochondria and initiates the release of caspases, or “executioner” proteins that cause cell death. To investigate how hESCs initiate the process so rapidly, the researchers tagged Bax with an antibody that lights up when the protein is active. They were surprised to find that Bax is already active in healthy hESCs, unlike every other cell type in which Bax is activated only when a cell is damaged or dying. “I was stunned,” said Deshmukh. “I thought something was wrong. We spent a lot of time convincing ourselves that these cells were healthy and not actively dying.”

The team also saw that active Bax was not located in the mitochondria but in the Golgi, a packaging organelle. It is possible that cells sequester active Bax there, like a gun locked in a case, to prevent it from accidentally triggering cell death. “The cells’ activated it and tethered it to a place where it is not causing immediate damage,” said Deshmukh. That way, Bax is ready to go at a moment’s notice.

Interestingly, as soon as hESCs began differentiating, even after just 24 hours, the cells no longer contained active Bax, suggesting that extreme sensitivity to DNA damage lasts only for a few days during early development.

The team is now investigating what makes Bax constitutively active in hESCs and how it is localized to the Golgi. Though hESCs are popular in regenerative medicine research, researchers still know little about their biology, said Deshmukh. “Most research focuses on how these cells become differentiated cells,” he said. “I’m amazed that we don’t understand much about their basic biology.”