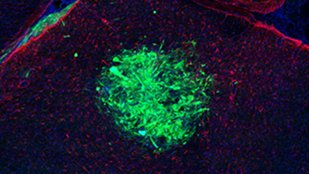 Glioma (green) in mouse brain. Image by Eric Bushong.The prevailing view that stem cells are the principle originators of brain cancer may be incorrect, according to a report out today (October 18) in Science. The new study suggests that terminally differentiated brain cells, including neurons, can be reprogrammed by oncogenic factors to become progenitor-like cells that then develop into brain tumors, or gliomas.

“What’s provocative about these experiments is that they challenge the notion that only stem cells can give rise to cancers of the brain,” said David Gutmann, a professor of neurology at Washington University in St Louis, Missouri, who did not participate in the study. “While we were all very excited 10 years ago when the cancer stem cell hypothesis came out, I think it was perhaps wishful thinking for us to believe that that was the only path to cancer.” The researchers were “able to...

The potential for multiple cell types to give rise to brain cancer may also account for the variety of glioma subclasses observed, Gutmann added.

Inder Verma, a geneticist at the Salk Institute in La Jolla, California made the discovery as part of a larger effort to create mouse models of glioma. The team had injected lentiviral vectors that activated Ras signaling—a pathway that promotes cell growth and division—into the brains of mice that were deficient in the cell cycle protein p53 to induce gliomas.

The cellular origin of these gliomas was unknown, but the researchers assumed the most likely candidates were neural progenitor cells, because such cells are more easily reprogrammable and share many features with cancer cells. In the latest study, however, Verma’s team used an approach to specifically target mature neurons and astrocytes, and found both cell types were able to produce gliomas.

The neuron and astrocyte-derived gliomas expressed high levels of stem and progenitor cell marker proteins. And in vitro studies confirmed that the lentiviral vectors induced differentiated adult brain cells to adopt progenitor like features—similar to those found in neural and induced pluripotent stem cells. Transplanting these reprogrammed cells into receptive mice resulted in tumor growth, confirming the cells were cancerous.

“What we’re saying is, any cell in the brain that gets an oncogenic insult has the ability to dedifferentiate [and form tumors],” said Verma. This might seem a rather bleak outlook, but “by knowing the mechanism, we at least have a handle to start thinking about [treatments],” Verma said.

Of course, just because differentiated neurons can be induced to give rise to tumors experimentally doesn’t mean the process occurs in human patients, Gutmann pointed out. But Verma and colleagues found evidence to suggest that it might.  An analysis of the molecular profiles of the tumors derived from adult neurons revealed a striking similarity to that of a particularly aggressive subtype of human glioma.  “It is possible that these human tumors might also have originated from neurons,” said Verma.

The finding also suggested that different cells-of-origin give rise to different types of glioma. “It’s like German Americans and Italian Americans,” said Gutmann. “They’re both American citizens but still retain their heritage.” Importantly, he added, those subtle ancestral differences “may make a huge difference in terms of response to therapy and outcome.”