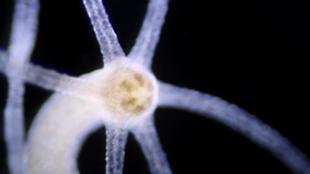 Pluripotent stem cells give hydras impressive regenerative properties.WIKIMEDIA, KRUCZY89The parasitic worm Schistosoma mansoni, which infects millions of people each year, causing diarrhea, malnutrition, and enlarged liver and spleen, relies on stem cells to fuel its long life inside human hosts, according to a study published earlier this year (February 20) in Nature. Parasitic tapeworms also have stem cells, as do the free-living planarian relatives of schistosomes. Indeed, self-renewing cells that can differentiate into the various other tissues of the body have been found in a dizzying array of animals, from primitive sponges and ever-regenerating flatworms to amphibians and mammals.

“[Stem cells] are an invention of multicellular animals,” explained Thomas Bosch, an evolutionary biologist at the University of Kiel in Germany. These cells are integral to reproduction and development, as well as to repairing and renewing tissues over an organism’s lifetime. Furthermore, new research suggests that...

Stem cells evolve to meet different organisms’ needs, noted Bosch. Simpler organisms, like the hydra, have “more simple stem cells that are more multifunctional,” while humans have more than 20 different types of stem cells, each supporting different tissues, from blood to hair. “In terms of evolution, there’s more and more specialization” as organisms become more complex, he explained.

The power of stem cells

Many tissues, such as skin and hair follicles, regenerate constantly throughout an organism’s lifetime, fueled by what are known as somatic stem cells. In contrast to germline stem cells, which give rise to eggs and sperm exclusively, somatic stem cells can differentiate into many types of tissues. Stem cells are critical to the impressive regenerative capabilities of animals like amphibians, allowing adult salamanders to regrow entire limbs. And symptoms of aging, such as hair loss and the thinning of skin, can often be traced to a decreasing pool of somatic stem cells that lose their function with time. But hydras, miniscule freshwater animals that reproduce both sexually and asexually, are unique: their somatic stem cells don’t age. As a result, not only can the tiny organisms easily regenerate themselves after damage, they are also essentially immortal—given the right conditions, they live forever.

Although not quite immortal, schistosome flatworms also have impressively long life spans, sometimes surviving in human hosts for years on end. The flatworms also share the hydra’s ability to regenerate. In the recent Nature study, regenerative biologist Phillip Newmark at the University of Illinois at Urbana-Champaign and colleagues discovered that these qualities can be attributed to worm stem cells. By tracking these cells in the worms, the team found that they bear remarkable similarities to the stem cells of non-parasitic planarian relatives, sharing their characteristic round shape, large nucleus, and cytoplasmic tail.

In addition to the flatworms’ longevity and regenerative capabilities, Newmark hypothesizes that their stem cells also facilitated the transition from free-living organism to host-dependent parasite. Newmark thinks that stem cells, with the potential to differentiate into a wide range of different tissues, could have provided the developmental plasticity needed for the organisms to quickly adapt to new environments—such as the inside of the human gut.

And if stem cells were the key to schistosome flatworms’ successful bid at parasitism, it isn’t the only time that stem cells have aided a drastic change in an organism’s lifestyle. Federico Brown, an evolutionary biologist at the Universidad de los Andes in Colombia, has found evidence that stem cells may have played a big role in the evolution of sea squirts, a group of squishy marine animals that attach themselves to rocks and filter sea water for sustenance. Many sea squirt species live independently, but some have acquired the ability to live as colonies, sharing a circulatory system that allows the exchange of blood, nutrients, and cells—including somatic stem cells.

While solitary sea squirts reproduce via germline stem cells and can regenerate isolated tissues, colonial sea squirts can also reproduce by budding—thereby adding another squirt to the cluster. Budding allows squirts to shift from “being strictly sexual and solitary to becoming asexual and colonial”—a process that involves stem cell reprogramming, explained Brown. Indeed, he found that a subset of the colonial squirts’ circulating blood cells are stem cells that have acquired the ability to generate an entire sea squirt from just a clump of cells. Brown proposes that developing new types of stem cells that can produce many more types of tissues enabled the sea squirts to form these unusual assemblies.

To each his own stem cell

As useful as somatic stem cells might seem, not all complex organisms have them. Unlike planarians and schistosomes, which can regenerate themselves from tiny pieces, or salamanders, which can regrow whole legs, nematode worms can’t regenerate at all. Cutting a Caenorhabditis elegans worm into bits quickly kills the classic model organism, said Alison Woollard, a stem cell biologist at the University of Oxford. That’s because C. elegans appear to lack somatic stem cells altogether.

But it turns out that even though adult C. elegans don’t have true somatic stem cells, they haven’t jettisoned stem cell-like qualities completely. During development, as the original fertilized gametes divide and differentiate into the exactly 959 cells of the adult nematode, the worms retain a type of cell called seam cells. Like stem cells, seam cells can divide asymmetrically, meaning that one daughter cell remains a seam cell while the other differentiates into a specific type of tissue. But unlike stem cells, seam cells stop renewing themselves once the worms reach adulthood.

Interestingly, the transcription factors that enable seam cells to divide asymmetrically are conserved all the way to humans. Woollard’s team determined that rnt-1—a worm homolog of the human transcription factor Runx1, which mediates proliferation of bone marrow stem cells—regulates seam cell division in C. elegans. In worms with a defective rnt-1 gene, seam cells often fail to divide asymmetrically, and certain tissue types, such specialized mating structures in males, are poorly developed. In humans, Runx1 helps regulate hematopoietic stem cells and subsequent stages of blood cell development, and translocations of Runx1 are linked to the over-proliferation of white blood cells in acute myeloid leukemia, demonstrating a conserved role for the genes from nematodes to humans.

Interestingly, scientists can mutate the transcription factors controlling seam cell proliferation to continue asymmetric cell division into adulthood. This suggests to Woollard that perhaps instead of losing stem cells altogether, C. elegans merely turned off the transcriptional program that maintains them. Losing the key to regeneration and long life may seem counterproductive, but a C. elegans worm “doesn’t need to regenerate,” explained Woollard. In their 3-week life span, nematodes instead put their energies toward “producing lots of progeny,” she said.

But nematodes are likely to be unusual among animals. Most species, like the long-living schistosome, find stem cells advantageous. “The point of stem cells is that organs and tissues must get repaired,” explained Bosch. “Schistosomes are highly advanced worms—why wouldn’t they have stem cells?”