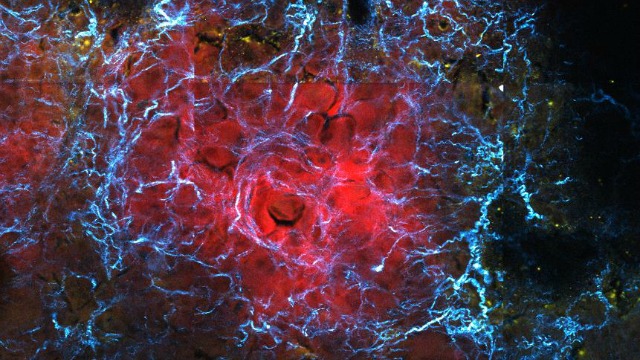 The collagen network (cyan) serves as a biophysical biomarker of cancerous cells (red).LINAN LIU & JENU V. CHACKOFor the first time, researchers have genetically engineered mesenchymal stem cells (MSCs) to deliver a therapeutic to tumor cells based on their stiffness relative to surrounding tissue. In a study published today (July 26) in Science Translational Medicine, scientists at the University of California, Irvine, report harnessing MSCs’ ability to sense outside pressure to deliver anticancer medication to tumors in mice, reducing damage from the drug to non-cancerous tissue.

“Stiffness as a biomarker . . . lasts for years in the body, so it’s very difficult for cancer to develop resistance if you target stiffness,” says senior author Weian Zhao.

Zhao says his group based the work on two recent observations: that biophysical cues play a role in cancer progression, and that stem cells can sense the stiffness...

Reasoning that stem cells’ stiffness-sensing properties could be used to deliver therapeutics in a targeted way, his team engineered human MSC genomes by placing a promoter, activated when the cells sense outside pressure, just upstream from a gene for the enzyme cytosine deaminase, which converts the anticancer drug 5-fluorocytosine to its active form.

See “The Forces of Cancer”

Then the researchers injected the cells into mice with breast tumors that had metastasized to their lungs. The next day, they began injecting them with 5-fluorocytosine, and continued the treatment for seven days.

These mice fared similarly to mice put through the same treatment but with stem cells that expressed the cytosine deaminase gene constantly, the authors write, but with one important difference. Zhao and colleagues found tissue damage in the lungs of the mice treated with cells constitutively producing the enzyme, and none in the lungs of the other mice—indicating, they say, that the stiffness-activated cells precisely targeted tumors without harming healthy tissues.

Zhao has filed a patent application for the technique and plans to commercialize it through a startup company he founded. 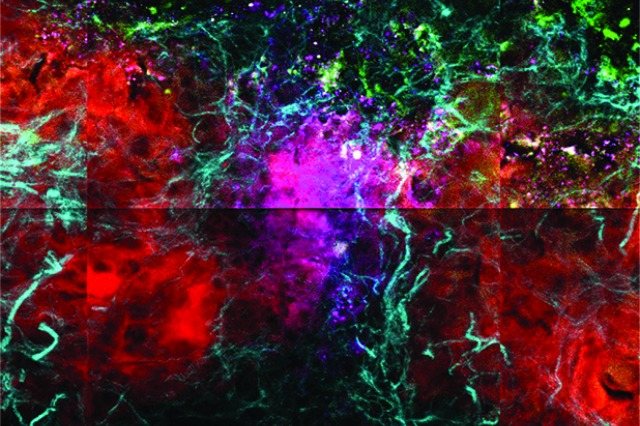 Engineered MSCs infiltrate a tumor.L. LIU ET AL., SCIENCE TRANSLATIONAL MEDICINE (2017)The idea of weaponizing MSCs to deliver anticancer therapeutics is not a new one, though this is the first study to use biophysical cues in the process. The first study on the topic was published in 2002, and there are now several clinical trials exploring its viability, according to Frank Marini, a cancer researcher at Wake Forest University and an author of that early study. But the potential for side effects if the cells end up in the wrong place has been a concern, he says, so those in the field have sought ways to ensure the MSC therapies would only target cancerous cells, and not healthy tissues. “I can certainly envision this being used as a safety switch in a clinical trial,” he says.

Marini says the technique of stiffness-based targeting may be most useful for applications other than cancer treatment. “Where I think this has a lot more promise is basically as a diagnostic tool for sensing fibrosis,” he says, suggesting that injected cells could be engineered to express reporter genes and thus make such masses visible to a medical scan.

The stiffness-sensing technique could also potentially be deployed to detect cancer at very early stages, suggests Celine Denais, a cancer researcher at University College London. The new study, she says, is “really an elegant article.”

See “May the Force Be with You”

Michael Andreef, a cancer researcher at MD Anderson Cancer Center who led the 2002 study on anticancer MSCs, says Zhao’s study is an “interesting contribution” and “certainly makes people think about perhaps using this system. But my contention would still be that MSCs by themselves home equally well—and they show this also—to the tumors and their metastases.”

Zhao says he thinks the best way to move the technique into the clinic may be by ditching MSCs altogether and applying it to immunotherapy. Engineering T-cells with the stiffness homing behavior might increase their specificity toward killing cancer cells. T-cells “have this intrinsic tumor-killing ability, which is actually very effective,” he says.