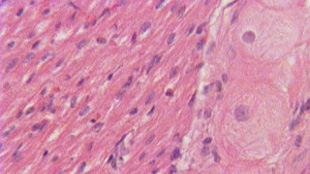 For years, scientists have found stem cells lurking in the heart, but they didn’t know whether the cells originated there or migrated from elsewhere through the blood stream. Now, a new study published today (December 1) in Cell Stem Cell describes stem cells that are indeed native to the heart, and can form cell types that could one day be used to help repair damage, such as from a heart attack.

“It’s another fascinating twist on the story of how the heart can maintain and repair itself long term,” said University of Wisconsin, Madison, stem cell biologist Tim Kamp, who was not involved in the study. “They make a strong case that these [cells] are resident within the heart, and are poised to do the maintenance of the structure of the heart.”

Heart disease is the number one killer in the United States,...

To find out whether MSC-like cells are born in the heart or just traveled there, Harvey and his colleagues killed the bone marrow stem cells in one group of mice and replaced it with bone marrow stem cells from donor mice tagged with green fluorescent protein (GFP). They then waited 8 months, and harvested MSC-like cells from the mice’s hearts. Surprisingly, none of the harvested cells glowed green, suggesting they did not come from the fluorescently tagged bone marrow, or from the blood, which would have retained the GFP tags as the bone marrow made new blood stem cells. Even when the researchers induced heart attacks in the mice, they found the same result—the MSC-like cells appeared to have originated right there in the heart.

The researchers next traced the MSC-like cells back to a specific heart region, and found evidence that the cells were created in an area that forms the outer layer of the heart, called the epicardium.  When they investigated the cells' properties further, they found the cells play a key role in building the arterial blood vessels and the extracellular matrix in which heart contractile cells are embedded, Harvey said.

Together, the finding that these cells exist in the adult heart and the identification of MSC-like cell’s role in development “suggest strongly the possibility that you could induce cell populations like this to be able to mediate heart repair,” said Sean Wu, a stem cell biologist at Harvard Stem Cell Institute, who was not involved in the study. In particular, the stem cells could one day be used to repair the scaffolding and structure in which heart muscle cells contract.

In addition to the structural matrix and surrounding blood vessels of the heart, however, there are also the contractile muscles, which the study suggested are not regenerated by MSC-like cells. Furthermore, the MSC-like cells don’t naturally divide in the adult heart, so even repairing the structural damage would require a way to “wake them up from their deep sleepy state and help them expand and differentiate into the appropriate cell type,” Harvey said.