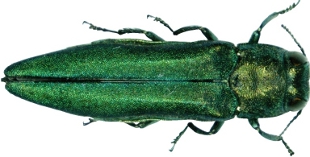 The emerald ash borer (Agrilus planipennis)WIKIMEDIA, PENNSYLVANIA DEPARTMENT OF CONSERVATION AND NATURAL RESOURCESEmerald ash borers (Agrilus planipennis), insects that are invasive in North America and have decimated ash tree populations in the U.S. and Canada, have a new foe thanks to a team of entomologists: electric female decoys. Researchers from the U.S. and Hungary made a variety of synthetic decoys—some using a “nanomolding process” that replicated the intricate surface structures and colors found on the beetles, and others that lacked the surface nanofeatures—and pinned them to tree leaves in Hungary. The team found that males were enticed into landing on the nano-bioreplicated decoys but not so much to the less intricate ones. “The breakthrough we’ve achieved,” lead author of the study, which appeared this week (September 15) in PNAS, Michael Domingue of Pennsylvania State University told The Verge, “is that we now...

Attracting insect pests to decoys is a departure from the typical strategy of using pheronomes to trap problematic creepy crawlers. “I’m especially interested to see how this method will compare with those currently used for emerald ash borer . . . both in terms of detection and overall cost of the traps,” University of Maryland entomologist Dave Jennings, who was not involved with the study, told The Verge. “Being able to find [it] in an area before it’s able to cause significant tree mortality will be very beneficial.”

Domingue and his coauthors went one step further, electrifying some decoys with 4,000 volts, which zapped curious males that were then collected in cups. “Our new decoy and electrocution process may be useful in managing what the US Department of Agriculture Forest Service claims to be the most destructive forest pest ever seen in North America,” Domingue said in a statement.

But it will likely be some time before the electric beetles are used to actually control invasive emerald ash borer populations in the wild. “For using a new trapping technique at a national level, it has to be tested for efficacy versus other traps, usually by the Animal & Plant Health Inspection Service,” Domingue told Vice’s Motherboard. “We are not quite at that point with these traps yet, because there are some minor engineering challenges that need to be solved before they realize their full potential,” he said. “For example, in the crude traps we built, rain disrupts the electrical supply, rendering them ineffective until the battery can be changed.”