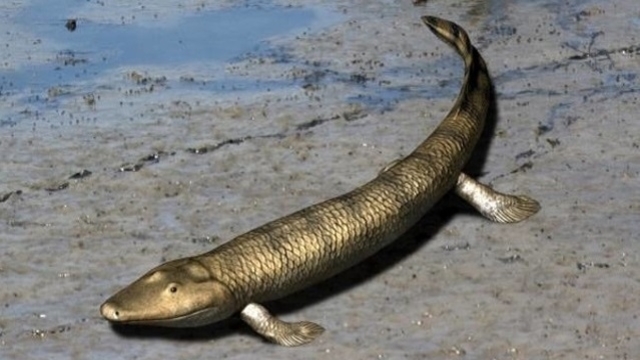 Around 400 million years ago, a sea creature—most likely a lobe-finned fish such as Tiktaalik—took the first, tentative steps on dry land. This transition led to the rise of all terrestrial tetrapods, but it remains unclear what evolutionary pressures initially drove them to clamber ashore. This week (February 15), researchers at the 2018 Ocean Sciences Meeting in Portland, Oregon, reported new evidence for the hypothesis that strong ocean tides may have had a significant role in the transition.

The idea that tide pools may have been a waystation in the evolution from sea to land has been generally accepted since it was first proposed by the American paleontologist Alfred Romer in the 1950s. But what the researchers test in the new study “is the actual driver of why the pools formed and why they were drying out,” Mattias Green, an oceanographer...

During the Devonian period, around 420 to 360 million years ago, the moon was much closer to Earth than it is now. In 2014, Oxford astrophysicist Steven Balbus proposed that the closer moon may have caused tidal ranges on Earth to be far greater during the period when tetrapods appeared. He suggested that the larger tidal ranges could have stranded sea creatures in tide pools, contributing to their evolution from water to land. “After a few days in these pools, you become food or you run out of food,” Green tells Science. “The fish that had large limbs had an advantage because they could flip themselves back into the water.”

To test the hypothesis that the isolating tides might have heralded the emergence of terrestrial vertebrates, Green and his colleagues simulated tides that appeared during the beginning of the Devonian period. Their analysis revealed that larger tidal ranges probably occurred around 430 million years ago in what is now South China, where the first evidence of lungs has been found, and 400 million years ago in modern-day Canada and Eastern Europe, where the first tetrapods are known to have emerged.

Some scientists remained unconvinced, however. “It’s only one of a plethora of ideas for the origin of land-dwelling tetrapods, any or all of which may have been a part of the answer,” University of Cambridge paleontologist Jennifer Clack, who was not involved in the work, tells Nature.