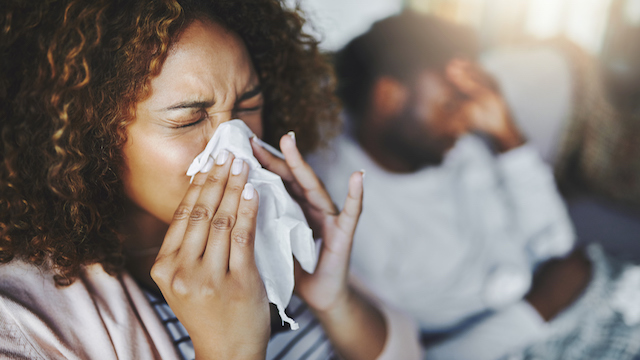 ISTOCK, PEOPLEIMAGESPeople can recognize sickness in others’ faces, according to a study published yesterday (December 3) in Proceedings of the Royal Society B.

“We can detect subtle cues related to the skin, eyes, and mouth,” study co-author John Axelsson of the Karolinska Institute in Sweden tells The Washington Post. “And we judge people as sick by those cues.”

To investigate whether facial features could indicate sickness, Axelsson and his colleagues took photos of 16 healthy, young, Caucasian volunteers three times—once following a shot of lipopolysaccharide (LPS), a molecule found in bacterial membranes that elicits an immune response and causes visual symptoms of illness without actually making people sick, and on two occasions after a placebo injection. Then, they recruited two groups of around 60 participants to rate those photos after viewing them for a maximum of five seconds. One group was asked whether the photographed individuals looked sick or...

Raters were slightly better than chance at correctly identifying 13 of 16 volunteers as “sick.”  Pale skin and hanging eyelids were the most consistent cues associated with apparent illness.

“They are only semi-accurate,” Mark Schaller, a psychology professor at the University of British Columbia who wasn’t involved in the study, tells STAT News. However, he adds, “it’s a useful reminder of the fact that when we humans use superficial characteristics as sickness cues . . . those superficial features often lead us astray, with the consequence that we may often respond to healthy people as though they are sick.”

Rachel McMullan, a biologist at the Open University in the U.K. who was not involved in the study, tells The Guardian that the study’s results suggest that ill individuals could be spotted soon after infection. “Being able to quickly identify and avoid potentially sick, contagious individuals will certainly be an evolutionary advantage and this study is a good starting point for further research into the how we detect early signs of infection,” she adds.