Globally, about 79 percent of people agree that vaccines are safe and 84 percent agree that they are effective, according to a survey of more than 140,000 people from about 140 countries conducted by The Wellcome Trust and published today (June 19).

The survey “exposes the paradox of Europe,” Heidi Larson of the London School of Hygiene and Tropical Medicine who worked on the study tells Reuters. Overall, people in wealthy countries were more likely to question the safety of vaccines, while having greater knowledge of science and higher levels of education. In North America and Northern Europe, respectively, 72 percent and 73 percent of respondents said they agree that vaccines are safe. In Eastern Europe, that number is just 50 percent.

“What’s happening in France is not the same as what’s happening in Ukraine, is not the same as what’s happening in Japan,” says Brendan Nyhan of the University of Michigan who has studied attitudes to vaccination to BuzzFeed News. In France, there is a distrust of politicians and a growing anti-vaccine movement, reports The Guardian. In Ukraine, armed conflicts have disrupted health services, according to BuzzFeed. And in Japan, concerns about a report linking the HPV vaccine to neurological problems may have lowered people’s confidence in vaccines, according to BBC News.

Vaccines are one of the most powerful public health tools, and people need to be confident in immunizations for them to be effective, says Jeremy Farrar of Wellcome in a statement accompanying the report.

“One of the most important interventions to counteract doubts and worries about vaccines is to have health workers really well trained and able and ready to recommend vaccinations based on scientific truth and to be able to respond correctly to questions and concerns that parents have and communities have,” says Ann Lindstrand of the World Health Organization to BBC.

Some countries in Eastern Europe, such as Ukraine and Belarus, have a large number of people who neither agree nor disagree that vaccines are safe and effective. “I think that’s the group that’s still open to discussion and there’s an opportunity there,” Larson tells BuzzFeed. 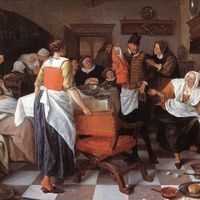