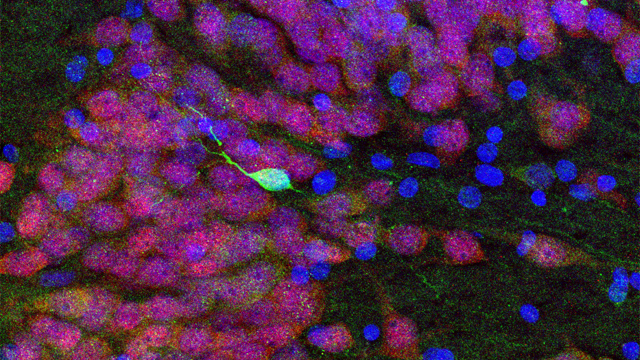 Stained tissue from a 13-year-old human hippocampus shows a single young neuron (green), surrounded by mature neurons (red) and cell nuclei (blue).COURTESY OF SHAWN SORRELLSNew neurons may not develop in the adult human brain as neuroscientists for years have come to believe. Researchers studying postmortem brain tissue of humans found evidence of neural precursor cells and immature neurons in fetuses, infants, and teenagers, but not in adults over 18 years of age. The findings, published today (March 7) in Nature, contradict two decades of research showing that human adult hippocampi—epicenters of learning and memory in the brain—generate new neurons and raise questions about how scientists study neurogenesis.

“The results highlight our need for new and better tools to study adult neurogenesis to ensure we are using the right markers,” Fred “Rusty” Gage, a neuroscientist at the Salk Institute who generated foundational evidence of adult human...

Much of the work on neurogenesis has been done in animals. In the latest study, Shawn Sorrells and Mercedes Paredes of the University of California, San Francisco, and their colleagues wanted to search for evidence of neurogenesis in human brains and test a different technique compared with what had been used in the past. The team collected postmortem and postoperation hippocampal tissue from 59 people, ranging from fetuses at 14 gestational weeks to adults 77 years of age, and stained the samples with the marker antibodies Ki-67+, SOX1+, and SOX2+ to identify neural progenitor cells and DCX+PSA-NCAM+ to identify young neurons.

Samples from patients with epilepsy showed progenitor neurons in a 10-month-old infant, but not in an 11-year-old child. The baby also had many young neurons, but a 7-year-old with epilepsy had very few, and none of the 13 individuals older than age 11 had any new brain cells, the researchers report. The results align with other studies showing that other mammalian species also generate fewer new neurons in the adult hippocampus with increasing age.

A recent study in humans found a similar result. In a 2016 study, Greg Sutherland, a neuroscientist at the University of Sydney, and his colleagues used a similar technique as was used in the new study and found evidence of neurogenesis in neonatal hippocampi that rapidly declined as children got older and was not seen after four years of age.

Sutherland notes that other researchers might be skeptical of the results because some markers of neurogenesis, including the ones used in the studies, can be hard to detect in fixed postmortem tissue, and have yielded mixed results. However, he tells The Scientist by email, the presence of Ki67/DCX-positive cells, indicating neurogenesis, is “so stark between neonatal and adult human brain tissue that it is impossible to reach any other conclusion.”

Still, researchers are not convinced neurogenesis in the adult hippocampus does not happen. “The paper describes negative data. . . . [T]hey do not find staining with certain markers, making them conclude that ‘adult neurogenesis does not continue, or is extremely rare, in the adult human,’” Jonas Frisén, a neuroscientist and stem cell biologist at the Karolinska Institute in Sweden, tells The Scientist by email. “It is in general very difficult to draw conclusions from negative data and one should be very cautious.”

Frisén notes that the same method the team used has provided evidence for neurogenesis in the adult hippocampus. He also says the current paper looks at the steps leading up to the generation of new neurons, but does not actually assess the presence or absence of new mature neurons. The Gage group and his own group have demonstrated the presence of adult-born neurons, he says.

In a News and Views article accompanying the new Nature paper, Jason Snyder, a behavioral neuroscientist at the University of British Columbia, says the team has used a careful approach to studying neurogenesis in adult humans and explains the results are “in stark contrast to the prevailing view that human hippocampal neurogenesis extends throughout adult life.” However, he does raise questions about the methodology, noting that if tissue is not quickly stored, DCX can degrade and that previous experiences can change PSA-NCAM. “An apparent loss of neurogenesis could therefore reflect changes in marker expression, especially if stringent criteria are used to define new neurons,” he writes. “Given that there are debates about hippocampal precursor-cell identity even in rodents, it is also possible that we simply do not know what to look for in humans.”

Gage notes that exercise and other factors can influence neurogenesis, so he would have liked to see more information on the activity and lifestyle of the individuals from whom samples were taken.

One question the results raise is what role neurogenesis in the adult hippocampus may play in learning and memory or even neurodegenerative diseases. Past studies have suggested that neurogenesis may bolster learning and memory and possibly also stress response and emotion. But, if neurogenesis in the adult hippocampus does not exist, as the new results suggest, then other forms of neuroplasticity, such as changes in synaptic transmission or remodeling of existing neurons, might be much more important, Sorrells and Paredes write in an email to The Scientist.

“Our findings in humans pertain to normal brains, and we cannot rule out the possibility that quiescent stem cells could be reactivated by injury or under some circumstances in this brain region,” they add. “It remains essential to study the process of adult neurogenesis in animal models because of the importance of this work to brain repair.”

Sorrells and Paredes also note that evidence of young neurons or dividing progenitors did show up in the walls of the brain ventricles. “Other regions in the human brain, which is very big,” they say, “remain to be explored for the possible presence of new neurons.”