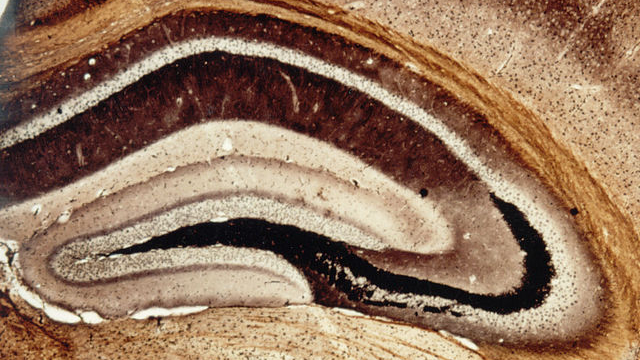 A rat hippocampusWIKIMEDIA, BLACKNICKFor more than three decades, Philip Landfield has been chipping away at a central question, namely, “why the electrophysiology of hippocampal connections is impaired in aged animals,” as the University of Kentucky neuroscientist puts it. It’s far from an esoteric problem, given that electrical impulses sent across neuronal connections strengthens synapses over time, forming the physical basis of learning and memory—meaning that less-efficient electrical transmissions are linked to cognitive decline.

With a study published today (December 18) in the Journal of Neuroscience, Landfield says he thinks his team is now close to finally getting to the bottom of the phenomenon that caught his attention in the late 1970s. The answer, according to the new study, involves a family of genes known as FKBP and its regulation of calcium release within neurons. What they found was that increasing expression of one of the genes...

“We’re . . . fascinated by the fact that just restoring this one molecule can reverse so many aspects of brain aging,” Landfield says.

Among the study’s implications, notes Gregory Rose, a neuroscientist at Southern Illinois University who served as one of the paper’s peer reviewers, is that it casts doubt on a now-popular idea that neuroinflammation is key to the symptoms of Alzheimer’s disease. The researchers “normalized a lot of a gene expression pattern, but equally importantly, what was not normalized were any of the genes that are upregulated with aging that have to do with neuroinflammation,” Rose tells The Scientist, suggesting that “if people are looking for symptomatic relief [for Alzheimer’s], reducing neuroinflammation is not going to solve the problem.”

In previous work, Landfield’s group and others had linked cognitive decline-related changes in the hippocampi of aged rats to excessive release of calcium within cells. The researchers had also identified genes encoding FKBP proteins as related to this calcium imbalance; when Landfield and his colleagues reduced one of the gene’s expression levels in young rats, calcium regulation was disrupted in the rats’ brains to resemble those of older animals, and when they ramped up the gene’s expression in older rats, their cognition improved.

If a decline in FKBP is responsible for calcium dysregulation and cognitive impairment . . . the question then becomes, why does the FKBP go down?—Philip Landfield,
University of Kentucky

In the new study, two members of Landfield’s lab, John Gant and Eric Blalock, set out to test why that was: what were the FKBP proteins doing, exactly?

The researchers injected viruses engineered to induce overexpression of one of the genes, FKBP1b, into the brains of 13-month-old and 19-month-old rats, and later tested the animals’ ability to learn the location of an underwater platform in a “water maze.” Then they euthanized the rats and analyzed gene expression in their hippocampi.

The results were striking: Not only did the treated rats perform better than controls of the same age in the water maze, but the hippocampal expression levels of more than 800 other genes had changed along with the FKBP1b overexpression. Nearly all of the altered expression levels had been changed to more closely resemble those of young control rats and had grown less similar to older ones.

“[We] found that the FKBP controls not only cellular physiology and cognition, but has a huge effect on a network of structurally important genes that affect the cytoskeleton and the extracellular matrix,” Landfield says. “We really think that this FKBP compound could be quite important, maybe a master regulator of calcium functions—and, of course, calcium is absolutely critical to all manner of functions in the cell.”

The fact that overexpressing one gene had such wide-ranging effects “is quite surprising,” Dheeraj Roy, a neuroscientist at the Broad Institute of MIT and Harvard who was not involved in the study, tells The Scientist. “Some other people would have predicted that maybe you need several different proteins to be overexpressed to decrease calcium release to a more younger-rat level.”

John Disterhoft, a neuroscientist at Northwestern University, calls the new work a “great paper” and says it raises new questions. “When they looked at the mRNA expression, that could have reflected consequences of learning as well as the consequences of the overexpression of the . . . protein itself. It doesn’t make it less interesting, but I think that’s something to be looked at more in the future,” he notes. In addition, he wonders whether overexpressing FKBP genes would have an even more dramatic effect on older rats selected for cognitive impairment, and whether particular parts of the hippocampus play a larger role in the effects seen—and thus would be important to target for translation efforts.

“This is a big question . . . Have they found a silver bullet, does this represent a new path for treatment? It’s highly unlikely that this molecule, even if you could figure out how to administer it selectively to the brain and even, possibly, more selectively just to a particular brain region—that that’s going to solve all the problems that we see in the clinic,” says Rose. But the study “does lead us in some interesting new directions,” he notes, by reinforcing the importance of calcium’s role in the hippocampus, and by demonstrating that age-related functional declines in the brain can be reversed.

Landfield says he thinks he’s close to cracking the puzzle that’s dominated his career, and he’s now focused on the next step. “If a decline in FKBP is responsible for calcium dysregulation and cognitive impairment . . . the question then becomes, why does the FKBP go down?” he says. “It’s quite possible that some metabolic condition or change in other cells is responsible for the decline in FKBP. So we’re now embarking on some studies to look at that.”