Fewer salmon in the southern region of Norway, a country that provides 55 percent of the world’s supply, are returning home to the rivers they spawned in after leaving for the sea.

The study surveyed the body size of 52,000 Atlantic salmon found in 180 Norwegian rivers between 1989 and 2016. Researchers from the Norwegian Institute for Nature Research, the Institute for Marine Research, and Rådgivende Biologer combined data from multiple years-long efforts to investigate the phenomena, likely caused by climate change, which researchers, as well as fishermen, have reported for years. They found that the growth rate and the number of salmon returning from the sea decreased suddenly in 2005 and that the numbers haven’t recovered since—a shift that impacts not only salmon and their prey but perhaps wildlife at all levels of the Norwegian marine ecosystem.

Preserving and predicting salmon’s past

Study coauthor Knut Wiik Vollset, a marine biologist at Norwegian Research Center (NORCE), tells The Scientist that his collaborators at Rådgivende Biologer reported a decrease in salmon growth on Norway’s West coast and rivers several years ago. So, Vollset and his colleagues collected and compared data on salmon size from 1989 to 2016 from multiple datasets across Norway to investigate what was behind salmon’s stunted growth. 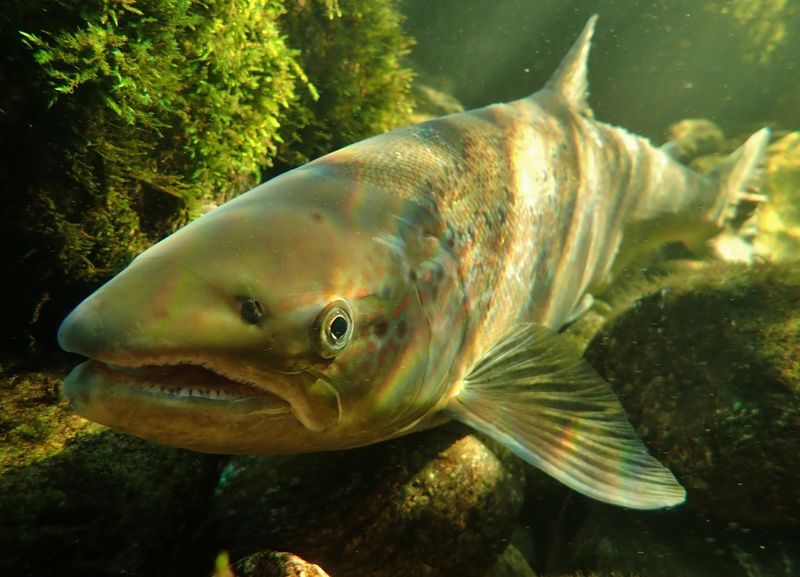 The researchers calculated salmons’ age and growth rate by measuring the size of their scales. For 30 years, it has been common practice in Norway for commercial fishermen to provide scale samples from their catch for fisheries research. Like rings on a tree, salmon scales grow throughout a salmon’s life, linearly increasing in diameter as salmon do. Each year, young salmon swim downriver to the sea, where they go through a period of rapid growth. Once they reach a specific size, typically after a year, they return to the very same river they spawned in, where they are either caught or spawn (most die shortly after spawning). Since salmon venture into the sea at roughly the same time each year, researchers can also estimate how long they’ve spent at sea.

Vollset says that he and his team expected changes in growth to be “gradually happening over time.” Instead, the researchers saw a “dramatic change occurring suddenly in 2005.” The researchers also found that salmon started to spend more time at sea after 2005. Larger, heavier salmon returned to rivers, indicating that the number of years salmon had spent at sea had increased. Researchers say this is significant because the longer salmon stay at sea, the more vulnerable they are to predation.

In order to find out why this dramatic change in salmon size and behavior occurred, Vollset and his colleagues enlisted the help of marine biologists from the Norwegian Institute of Marine Research, asking if they had seen anything that could help explain the drop in growth rate.

The marine researchers looked at the patterns of growth and abundance in other marine species. “We saw that [the decrease in growth] co-occurred clearly with some of the patterns they were observing,” Vollset says. “There was a 50 percent reduction in zooplankton . . . in the North Atlantic Sea.” Then, about two years later, mackerel growth collapsed in a similar way to that of salmon. These findings suggest that, after 2005, both mackerel and salmon had less to eat.

The researchers think that rising temperatures in the Norwegian sea, which stem from a potentially climate change-related decrease in the amount of frigid arctic water that flows south each year, could be driving these changes. Over the last three decades, the Arctic water current has been slowing, says Vollset. “By 2005, it disappeared entirely,” he explains. It’s since been replaced by a rush of warm, nutrient-rich water, which researchers say resulted in widespread changes throughout the ecosystem, including causing salmon’s food to become less abundant and disrupting the salmon’s growth.

“You might expect that as things warm up, populations would grow faster,” Peter Westley, a marine biologist at the University of Alaska, Fairbanks, who was not involved in the work, tells The Scientist, “But what this points to is that as things warm up, the food web . . . has shifted in ways that the salmon become food-limited.”

This study shows that even small temperature changes “can have a disproportionate effect on things that people care about, like the size and growth of Atlantic salmon, in this case,” Westley says.

See “A ’Climate Catastrophe’: Western US Salmon on the Brink”

Lisa Crozier, a research ecologist at the National Oceanic and Atmospheric Association, who researches Pacific salmon, tells The Scientist that she was “unsurprised” by the findings, as similar decreases in body size with increasing temperature have been documented in some Pacific salmon species. “We’ve known for a long time that catch correlates with climate drivers. . .The big question is how climate change is going to drive a long-term trend here.”

Some researchers have long suspected that climate change can cause ecological systems to rapidly change, potentially making them more fragile. Vollset says there’s no indication that the Norwegian marine ecosystem as a whole is in danger. However, last year’s United Nations Climate Report mentioned tipping points 97 times, identifying 12 tipping points that could lead to irrevocable harm to specific ecosystems and spur further climate change, though the impacts of these ecological shifts are poorly understood.

While it’s clear that salmon are eating zooplankton, data regarding the availability of the majority of salmon’s food sources over this period was not available. And while the correlations between salmon growth, zooplankton availability, and temperature are strong, “there’s still a lot we don’t know about the mechanisms,” says Vollset. For example, human activity and predation, as well as parasites from salmon that escaped fisheries, may also affect growth.

Westley suggests that genetic changes could also impact salmon growth. “The question is: are these changes just environmental?”

For example, a study published in Science last month found a genetic component to early salmon maturation that’s affected, both directly and indirectly, by commercial fishing. The researchers pinpointed an allele, vgll3, that led to late maturation and larger salmon size. Fishing in rivers selected for salmon that remained smaller in their early growth cycles, making them less attractive to fishermen, and decreased the prevalence of this allele in certain salmon populations. However, fishing for capelin—one of salmon’s main food sources—for salmon farms reduced the amount of food available to salmon at sea and selected for early growth, indirectly increasing the prevalence of vgll3.

In one particular river located on the North Atlantic coast of Norway, a region where the Science Advances study didn’t see a drop in salmon growth, the researchers behind the Science paper reported that salmon grew quicker on average and spent less time at sea. Nevertheless, evolutionary biologist Tuktu Aykanat, who coauthored the recent Science paper, tells The Scientist that Vollset’s study is a “very important paper,” and separately suggested that genetic analysis is the “next step” for finding the mechanism behind the shrinking salmon.

Vollset says that his study has implications for salmon management. “If you want to keep the salmon population alive, you have to manage it in a way that they’re resilient to these dramatic changes if they occur,” he says. He says that people may not want to “take too much out of these populations, because next year, you don't know whether or not these changes are occurring.” Larger fish, which are typically more attractive to fishermen, may have stayed longer in the ocean to mature, and may already be more vulnerable to predation.

Westley points out that researchers are bad at predicting when these shifts will occur, making the future for many marine populations uncertain. “As we move forward, when is the next surprising regime change going to happen?” says Westley, “and when are we going to know we’re in a new regime?”