In late summer, from southern Canada to northern Mexico, seas of sunflowers bloom in fields and farms. The flowers, which grow at the top of long, one- to three-meter stems, appear to us to be somewhat uniform, with bright yellow rings of petals adorning brown irises. But bees and other pollinators—which can perceive ultraviolet colors—instead see bullseyes that are darker in the middle and lighter at the edges.

According to a study published January 18 in eLife, these patterns not only help attract pollinators, the compounds that create them also appear to regulate water loss—potentially helping sunflowers adapt to their environments. The researchers also found a single gene region responsible for the size of the bullseye.

“It shows how smart evolutionary adaptation can be, to use the same trait to do two very different things that are both very important for the plant,” Marco Todesco, a plant geneticist at the University of British Columbia and lead author of the study, tells The Scientist.

The findings could help researchers understand how sunflowers, and potentially other flowers, may respond to the increasing temperatures and more frequent droughts that are expected to occur because of climate change. 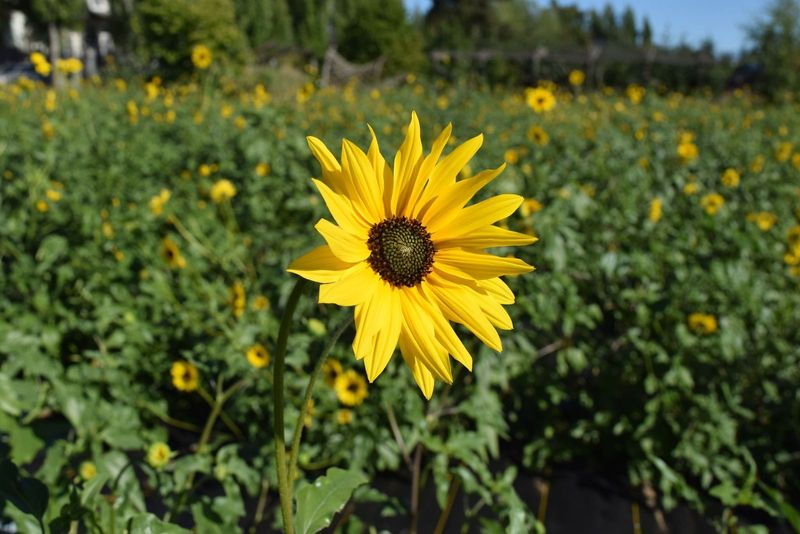 A sunflower from the University of British Columbia's fields
marco todesco

The sunflower (Helianthus spp.) is an expert at adapting to harsh habitats. Members of its genus can live in extreme environments, including in hot, arid deserts and salt marshes. “We are interested in understanding, from an evolutionary and genomics perspective, how they do it,” says Todesco.

The study involved cultivating more than 1,900 individual sunflowers originally sourced from across North America in the University of British Columbia’s fields, with the intent of characterizing traits such as flower color so the team could discover their genetic basis.

When the researchers began taking UV pictures of the sunflowers, their hidden patterns immediately stood out. Bullseye size varies widely from sunflower to sunflower, ranging from small circles in the middle of the flower to large bullseyes that take up the entire petal. The variation was not just among species, but also among individuals of the same species, signaling to researchers that it could have evolutionary importance.

Other flower species use similar patterns to draw in pollinators, so the team wanted to determine if the same was true for sunflowers. Sure enough, pollinators visited flowers with medium-sized bullseyes 20 to 30 percent more frequently than those with small or large bullseyes—in line with what research on other plants has found. But if the intermediate size was the most attractive to pollinators, why was there so much variation? Todesco reasoned that the bullseyes must have another function—one driving the extreme variability in size.

To investigate that possibility, the researchers plotted the variation in size of UV bullseyes for the common sunflower (Helianthus annus) across North America by using their cultivated individuals as representatives for their source populations. Sure enough, they saw a clear geographic pattern to the variation.

Todesco’s first thought was that the bullseyes, which contain UV-absorbing pigments, might protect sunflowers from excess solar radiation. But there was no correlation between the UV intensity of a sunflower’s original geographical region and average bullseye size.

The next possibility the researchers considered, Todesco explains, was temperature. Previous studies have suggested that the flowers follow the sun to absorb heat, which both helps them grow faster and attracts pollinators. Perhaps larger bullseyes, with their abundance of UV-absorbing pigment, serve a similar function by helping to warm up the flowers, the team hypothesized. But when the researchers compared the amount of heat coming from flowers with bullseyes of different sizes, they found no difference at any point in the day.

Finally, they noticed that sunflowers with large bullseyes were sourced from drier environments, whereas sunflowers with small bullseyes came from more humid environments. That led the researchers to speculate that the bullseyes had something to do with moisture retention. To test that hypothesis, the team isolated petals from the flowers and measured the time it took for ones with different UV coloration to dry out.

“We found that flowers that were coming from populations in very dry places tend to have these much larger UV patterns. And we found that plants with larger UV patterns lose water at a much slower rate,” says Todesco. That would be helpful in dry environments regardless of solar radiation or temperature. Meanwhile, if the local climate is both humid and hot, smaller patterns would allow for more transpiration—which Todesco likens to sweating—which could keep the flowers from overheating.

The team concluded that UV patterns have a dual role—attracting pollinators and helping the sunflower maintain the right amount of moisture—and that the interplay between those pressures drives the wide variation seen in the wild.

See “On the Origin of Flowers”

“Finding a single region in the genome that explained so much variation was pretty amazing,” Matthew Koski, a plant biologist at Clemson University who was not involved in the study, tells The Scientist. Koski studies the UV pigmentation of cinquefoil, a flowering plant.

In H. annus, the influential SNP is in a transcription factor called HaMYB111, which controls the production of flavonol glycosides. These compounds can absorb UV but also have other key functions, including water retention, limiting transpiration, and reducing damage from oxidative stress. In that way, the connection between the UV patterns and reducing water loss made sense—larger patterns would occur when the plant is pumping out lots of moisture-retaining flavonol glycosides. Still, to be certain of the transcription factor’s influence on petal coloration, the researchers engineered the gene into Arabidopsis thaliana mutants, which lack UV bullseyes. The engineered plants gained bullseyes, showing that HaMYB111 is indeed responsible for producing the bullseye-making glycosides.

“This was an amazing combination of multiple interesting approaches to understanding both the genetic underpinnings of floral pigmentation and the potential adaptive roles,” says Koski, “and in the end, it came together as a really beautiful biological story.”

This was an amazing combination of multiple interesting approaches to understanding both the genetic underpinnings of floral pigmentation and the potential adaptive roles . . . it came together as a really beautiful biological story.

He says the findings could “absolutely apply to other flowers,” adding that this study and studies like it can potentially give researchers a peek at how plants may respond to climate change. “From a global change standpoint, some regions are going to be experiencing increased aridity, some regions are going to be experiencing decreased aridity, more rainfall. This study might help project how these traits might respond to changes in environmental conditions.”

John Burke, a plant geneticist at the University of Georgia who was not involved in the study but who has previously collaborated with the authors of the paper, agrees. “This is a single trait that potentially influences the sunflowers’ ability to survive or thrive in a given environment. That could have implications for defining range limits of wild species and predicting impacts as the environment is changing,” he says.

Todesco says he hopes the findings will help farmers. Sunflowers are cultivated for various reasons, including sunflower oil, which is a $20 billion industry. Global climate change, he says, will likely disrupt this industry. Studies like this one are important, he adds, because “understanding how crops have [adapted] in the past can provide information on how to make these crops more resilient to what is coming, which is a disruption of agriculture and plants as we know them.”