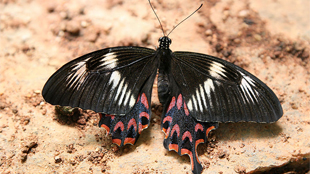 The mimetic females come in three distinct patterns and, for decades, scientists believed that these different disguises were controlled by a “supergene”—a cluster of genes that each control different parts of the wings, but are inherited as a single block.

But Krushnamegh Kunte from the Tata Institute of Fundamental Research in Mumbai, India, has now shown that the supposed supergene is, in fact, a single gene called doublesex. By expressing different versions of the gene at different levels, the butterflies can radically switch their wing patterns to mimic many different species. Kunte’s results are published today (March 5) in Nature.

British scientists Sir Cyril Clarke and Philip Sheppard came up with the supergene idea in 1960s, after their cross-breeding experiments showed that Common Mormons inherit their entire wing patterns as one, rather than as separate elements. The concept has since been very influential, although no one had actually identified the clustered genes.

Kunte, together with Marcus Kronforst at the University of Chicago and their colleagues, finally achieved this by comparing non-mimetic females that resemble males with those that look like the common rose swallowtail. They searched for parts of the butterfly’s genome that were linked to the mimetic patterns, and eventually identified a small region containing five genes. Four of these were similar in all the females, regardless of their patterns.

These mutations change the way the doublesex protein folds. However, they do not affect the parts of the gene involved in separating the sexes, allowing it to retain its usual function while picking up a new role as a wing-pattern controller.

Kunte and Kronforst also found that when doublesex is transcribed into RNA, the transcript is spliced into four distinct forms—three found in females, and one in males. It appeared these forms would explain the females’ varying disguises, but every female carries all three isoforms regardless of its colors. Instead, it’s the gene’s expression that matters. The team showed that doublesex is more strongly expressed in the mimetic females, and in parts of the wing that produce white markings.

Although doublesex is just a single gene, it still fits with the classical concept that Clarke and Sheppard proposed. Kunte and Kronforst found that the mimetic version of doublesex is inverted relative to the non-mimetic one, so it sits in a different orientation in the genome. This stops the different alleles from shuffling with one another, and ensures that their thousand mutations are all inherited together.

Other scientists have discovered classical supergenes in many other organisms, including other butterflies. For example, Matthieu Joron from the French National Centre for Scientific Research showed that the varied patterns of Heliconius butterflies are controlled by clusters of many genes, which are also locked together by a genomic inversion. “The two lineages independently evolved a remarkably similar solution in response to similar pressures for precise mimicry,” he wrote in an e-mail. Joron added that he would now like to know what each element in the Common Mormon doublesex gene does, and why they need to be kept together to produce the full mimetic patterns.

Kunte also wonders whether scientists have typecast doublesex as a sexual differentiation gene, when it could potentially do much more. “Throughout the animal kingdom, you see tremendously different males and females,” he said. “Maybe this particular gene family, involved in sex determination throughout the animal kingdom, is also involved in making deer antlers or peacock tails.”