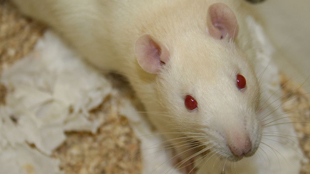 FLICKR, JEAN-ETIENNE MINH-DUY POIRRIERTreating cocaine addicts is challenging because they are frequently at risk for relapse elicited by cues connected with the drug, like spending time with other users or in places where they previously used cocaine. Like humans, when cocaine-addicted rats go through withdrawal, drug cravings in response to cocaine-associated cues intensify, or incubate. Now, by positively modulating the function of a type of glutamate receptor in the brain, Marina Wolf, Kuei Tseng, and colleagues from Rosalind Franklin University of Medicine and Science in North Chicago, Illinois, have used a drug targeting this receptor to decrease cue-induced cocaine cravings in addicted rats. Their work was published today (November 24) in Nature Neuroscience.

Wolf and Tseng’s group previously showed that the rise in cue-induced cravings in cocaine-addicted rats is based upon the increase of a rare type of glutamate receptor—Ca2+-permeable AMPA receptors (CP-AMPARs)—in the nucleus...

This newest study is “very thorough, and it certainly links mGluRs to a specific behavior in a model for addiction,” said Christian Lüscher, a professor in neuroscience and neurology at the University of Geneva in Switzerland, who did not participate in the work. CP-AMPARs are also present for a short time during development, he explained. “This is sort of a re-opening of a developmentally critical period . . . where plasticity is extremely high, and that’s probably how drugs do their damage.”

The team began by training naïve rats to poke their noses into a box, where they would receive either saline or cocaine via an implanted catheter as a light was illuminated. After 10 days of six-hour sessions, the scientists began the withdrawal or incubation period, which would be analogous to abstinence in human addicts. The researchers tested how the rats responded to the cue—the light illuminated by a nose poke—in the absence of cocaine at varying times during incubation. They saw an expected increase in cue-induced cravings over the course of incubation. When some animals received a drug called SYN119—a positive allosteric modulator of mGluR1 activity—via either intraperitoneal injection or injection directly into the NAcc, though, the treated rats performed significantly fewer nose pokes after withdrawal day 45 than rats that received a control injection. This result suggested that the rats experienced a decrease in cue-induced cocaine cravings meditated by augmenting the activity of mGluR1.

The researchers performed electrophysiology analyses on brain slices of treated and control rats to demonstrate that the changes in behavior after treatment were accompanied by a decrease in CP-AMPAR activity in the NAcc of treated rats that lasted about 24 hours. They also showed that a decrease in mGluR1 in the cells of the NAcc preceded the increase in CP-AMPARs during incubation. The scientists manipulated this mGluR1 decrease by adding an mGluR1 antagonist early on in withdrawal, which led to an earlier onset of CP-AMPAR accumulation, indicating that mGluR1 could work to stop the rise of CP-AMPAR activity during addiction.

“There’s some underlying problem in these neurons that is driving a whole host of changes—not only related to CP-AMPARs, but to other aspects of synaptic function, as well,” said Wolf. “I think there’s something underneath, some kind of engine driving all these adaptations, and mGluR1 is just a braking influence.”

“What makes this different and a major push forward . . . is that it has clinical, translational potential,” added Ryan LaLumiere, an assistant professor of psychology at the University of Iowa, who did not participate in the research. “[The system] is not always easy to target in people [because] it might have disruptive effects elsewhere in the brain,” he continued, “but by using this modulator and having very selective targeting, it really enhances the translational potential.”

“Whenever you have an allosteric modulator, it tends to be self-limiting,” explained David Self, a professor of psychiatry at the University of Texas Southwestern Medical Center in Dallas, who was not involved in the work. “So if you’re looking for something that you could actually give as a treatment for addiction, this could be good because you would have fewer side effects.”

But there is more work to be done. Self noted that the question of how long the decrease in mGluR1 persists in the NAcc must be addressed. And because relapse can occur at any number of time points, he added, it would be useful to determine whether mGluR-positive allosteric modulators can directly affect cocaine-seeking behaviors independent of CP-AMPAR accumulation. If so, “they could be beneficial to both reduce craving early on and block physiological responses that exacerbate craving after prolonged withdrawal,” he said.

In addition to exploring the mechanism of action of SYN119 in this and other drug addiction models, Wolf and Tseng are collaborating with a medicinal chemistry group to develop more soluble and effective modulators of mGluR1. “From the standpoint of improving our ability to help people who are addicted to cocaine, and maybe other drugs as well, it’s great to simply find a brake,” Wolf said. “If you could provide people with something they could have in their back pocket and then take on a day when they might encounter relapse-promoting cues . . . this would help a lot,” she continued. “It’s a Band-Aid, not a cure, but we don’t have a lot of other tools available to lower the risk of cue-induced relapse.”