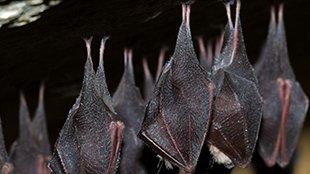 Greater horseshoe batsGARETH JONESBats and dolphins each evolved echolocation systems independently. But despite the different origins and mechanisms of their sonar senses, similar genes appear to be involved. Now, a report published today (September 4) in Nature reveals that the extent of such genetic convergence is more widespread than originally thought, with evidence of similar sequence changes across bat and dolphin genomes.

“This is a great example of how taking a genomic approach really can tell you a lot about . . . how organisms adapt in general, and how big a proportion of the genes can be affected by an individual’s environment and their adaptation to it,” said Judith Mank, chair of evolutionary and comparative biology at University College London, who was not involved in the study. “I was really surprised by the degree of convergence,” she said.

Even within the bat family echolocation has evolved more than once, said Joe Parker, a researcher at Queen Mary University of London and coauthor of the new study. Some species emit a fixed frequency sound, while others modulate the sound frequency, he said, and “the physiology and neurobiology underpinning those [two mechanisms] are of a completely different order of complexity.”

This convergent evolution of echolocation between divergent bat species as well as between bats and dolphins is underpinned by related DNA sequence changes in genes involved in hearing. In fact, said Parker, the sequence changes are such that if researchers were to look at these genes alone, rather than the animals’ full genomes, they would predict an “artificial phylogenic tree where the echolocating species were grouped together.”

A handful of similar reports—describing convergent sequence changes at individual genes associated with convergent traits—have been published in the last few years. “But I liken it to astronomy,” Parker said. “If you’ve only pointed your telescope at a small fraction of the sky, you don’t know whether the phenomenon which you’ve seen is because it’s common, or because you’ve been lucky.”

Thus, he and and his colleagues looked at as many sites as possible across the genomes of echolocating bats and dolphins to see whether other genes might exhibit sequence convergence and, if so, how many. Identifying truly homologous genes from such divergent species is not trivial. The team therefore used a hyper-conservative approach to compare only those that have one copy in each of the genomes. Thus, from approximately 20,000 genes—the rough number of genes in a mammalian genome—the team ended up comparing just 2,326.

However, nearly 200 of those exhibited signs of convergent evolution between two unrelated types of echolocating bats and dolphins. Not surprisingly, the list included genes involved in hearing. But there were also genes involved in neural development, vision, fat metabolism, and digestion, said Parker.

“What I think is amazing is that they find a whole bunch of genes that typically have no roles in sensory perception, yet . . . show some type of evidence of convergence between echolocating bats and echolocating whales,” said Emma Teeling, a professor of evolution and genetics at University College Dublin, who did not participate in the research. For researchers interested in the physiology of echolocation, “these are probably interesting genes that should be explored to understand sound perception,” she added.

Indeed, “most proteins don’t act singly—they act as part of a network,” said Parker. He explained that if the structures and functions of a few hearing genes are tightly constrained by their roles in echolocation, the structures of the proteins with which they interact might also be affected. Essentially, “a cascade of natural selection is likely to apply,” he said.

“When natural selection is operating, it doesn’t necessarily always have an infinitely large palette of paints to draw on,” Parker said. “Sometimes it can come up with the same solution twice, not just at the physical level, but also right down to the molecular level—which, given the possible combinations of DNA there are, is actually, frankly, quite surprising.”