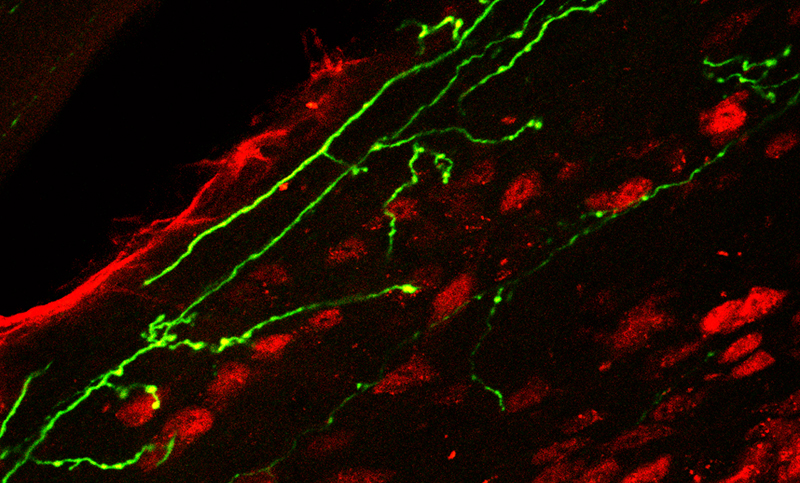 An image of the mouse brain area that receives information from the spinal cord. Spinal neuron axons are labeled in green and neuronal cells in red.
maria maiarù, UCL

Opioids—one of the most effective treatments for pain—come with a host of potential side effects: addiction, risk of overdose, and the development of tolerance that renders the drugs less effective over time. But in study published today (July 18) in Science Translational Medicine, researchers have used spinal injections of modified botulinum toxins to alleviate pain in mice, a strategy that may prove to be a safer alternative to opioids.

“Probably the most exciting thing is that you would be unlikely to see things like misuse” with this treatment, says Erin Young, a pain geneticist at the University of Connecticut who did not participate in the work. “Even if there is tolerance, it’s unlikely that this would be a...

Maria Maiarù, a postdoc at University College London and study coauthor, says that the research began with a desire to target groups of neurons that process pain in the spinal cord. Previous work had shown that botulinum toxin can block synaptic transmission in neurons by cleaving a protein necessary for the release of signals at the synapse. Researchers from the same group as Maiarù had also demonstrated in the past that modifying the portion of the toxin responsible for getting in to neurons could give it specificity for different cell types.

In this latest study, Maiarù and her colleagues linked the portion of the botulinum toxin responsible for silencing neurons with either substance P or dermorphin, molecules that bind two different receptors found on spinal neurons that carry pain signals to the brain.

When the authors injected either compound into the spinal cords of mice with inflammatory or neuropathic pain, the drugs diminished the animals’ heightened sensitivity to touch, suggesting that their pain subsided. The analgesic effects lasted for the duration of the experiment—up to 21 days after the single dose. The researchers confirmed that the treatments did not affect normal sensation—only the increased sensitivity associated with pain—and that each version made it into only the neurons it was intended for and didn’t kill the cells. They found that the dermorphin-botulinum combination, which targets the same μ-opioid receptor as morphine, was also as effective a pain reliever as morphine.

The authors “really nicely demonstrate . . . that you can target specific populations of neurons by going after the” relevant receptor, says Michael Gold, who studies the neurobiology of pain at the University of Pittsburgh and was not part of the study. One caveat is that “the substance p antagonists have not really shown any efficacy for pain in humans,” he says. “And so the implication is that this population of neurons may be important, but . . . at the end of the day, the essential question’s going to be, What is the critical population of neurons?”

Another potential issue is the common mechanism of targeting the neurons, says Young. “With opioids you see tolerance, so . . . it’s possible that because you’re binding to the same receptor in the case of the [dermorphin]-botulinum toxin that you would see changes in sensitivity to the toxin itself and that it might have reduced efficacy over time,” she says. Nonetheless, “these tools are more like using a scalpel when systemic opioids are like using a sledgehammer,” she says, adding that because the drugs are not systemic and target specific neurons, they would not have the other side effects of opioids like constipation, sedation, and mortality.

Maiarù says that future directions of the research include investigating whether the treatment works in companion dogs that experience pain related to bone cancer, which she says would be an intermediate step between the rodent research and human clinical trials. But before that, she wants to follow the mice for longer to determine how sustained the effects of the injections are. “Our preliminary data in vitro suggests that this compound can be effective for up to 100 days [following a] single injection,” Maiarù says.

Because the botulinum toxin eventually stops being effective, Young says, an important consideration is how cells fare after repeated administrations of the treatment. An extended look at these drugs could tell researchers “whether or not this would be an effective strategy for long-term pain maintenance or whether it’s really just a short-term fix,” Young adds. “You reduce suffering either way. That’s the goal.”