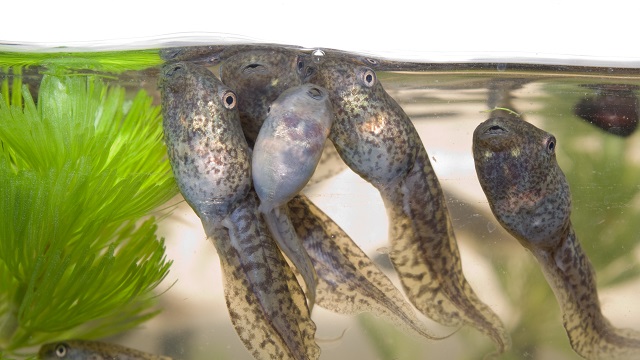 ISTOCK, KERKLAA tadpole has a lot of growing to do to get up to the size it needs to be to metamorphose into an adult frog or toad. Now, researchers at the University of Michigan suggest that this rapid growth is made possible by a lack of inhibitory feeding controls prior to metamorphosis. The team reports the absence of these controls, along with the hormonal regulation that accompanies it, today (March 28) in Proceedings of the Royal Society B.

“Our findings are consistent with the hypothesis that the strong drive to eat prior to metamorphosis is due to the absence, or the relative immaturity of hypothalamic feeding control circuits,” the authors write in their paper. This lack of inhibition helps allow “the animal to maximize growth during this critical life-history stage.”

Previous work by the researchers had implicated a role for leptin, a hormone that acts as a...

The researchers found that the tadpoles were essentially unresponsive to leptin, unlike their adult counterparts, and showed minimal expression of the leptin receptor in the hypothalamus—a key brain region in the regulation of feeding behavior. Instead, these responses develop as the relevant neural circuits mature during metamorphosis, the authors write.