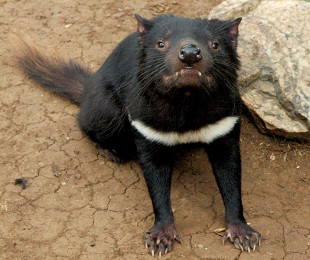 WIKIMEDIA, KERESHDuring the last 20 years, a contagious cancer has decimated Tasmanian devil (Sarcophilus harrisii) populations. Cancer cells, which are spread by biting, grow deadly tumors on the faces and mouths of the aggressive marsupials. Because devil facial tumor disease (DFTD) has been observed in almost all known populations and is nearly 100 percent fatal, epidemiological models have suggested that the most long-infected populations are facing extinction.

“But they’re currently surviving,” said Andrew Storfer of Washington State University. Now, he and his colleagues have the start of an explanation as to why. In a study published today (August 30) in Nature Communications, Storfer and an international team of researchers reported genomic evidence to suggest that Tasmanian devils are evolving resistance to DFTD.

“It’s such an important finding,” said Beata Ujvari of Deakin University in Geelong, Australia, who did not participate in the work. “We suspected that...

Storfer and colleagues scanned the genomes of 294 Tasmanian devils from three locations across the Australian island, examining tissue samples collected both before and after the emergence of DFTD in each area. The researchers identified two genomic regions that showed evidence of positive selection—based on shifts in allele frequencies before and after DFTD’s arrival—and observed parallel changes in the same chromosomal locations in animals from all three populations. The researchers also showed that, of the seven genes in the identified regions, five are orthologous to genes in other mammals that are known to play a roles in the immune system or cancer.

“I’m not surprised to see evolution of resistance to devil facial tumor disease in Tasmanian devils,” said Kathy Belov of the University of Sydney, Australia, who did not participate in the work. She added that the specific genes identified in this study are likely not the only ones that confer tumor resistance. “In the wild, resistance will evolve and I think we’re going to see lots of different genes evolving.”

In the current study, the researchers’ methodology covered about one-sixth of the Tasmanian devil genome. Study coauthor Paul Hohenlohe described future plans to use whole-genome sequencing, “to take a much deeper look at the genomes of just a few individuals that show an interesting response to the disease,” he told The Scientist.

Hannah Siddle of the University of Southampton, U.K., who was not involved in the work, identified another important next step. “It is important that there are some functional analyses done, particularly on the genes that they’ve identified as potentially having a role in perhaps the immune response to the tumor or in cancer causation,” she said.

Storfer and his colleagues are currently using cell culture to explore the functions of these genes. Another active area of their research is examining whether the genetic variants identified in this study could also confer resistance to a second transmissible cancer recently found in Tasmanian devils, called DFT2.

DFT2 “appears to be completely unique in a genetic sense from DFT1 [DFTD],” said Siddle. “At the moment we don’t really understand how widespread it is, what its mortality rate is on the Tasmanian devils,” she noted. “But perhaps this does give us some hope that there will be some adaptation to both of the tumors in the future.”