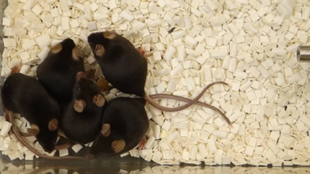 Mice huddle for warmth.KATHLEEN KOKOLUS AND ELIZABETH REPASKYNational Research Council recommendations dictate that laboratory mice be housed at a constant temperature—between 20°C and 26°C—to reduce the need for frequent cage cleaning and to help ensure lab staff comfort. But though their body temperatures do not change, the temperature at which mice maintain homeostasis without expending energy to combat cold stress—their thermoneutral temperature—is closer to 30°C or 31°C. While most mice cope with mild cold stress fairly well, until now scientists had not explored the effects of being cold on mice with tumors.

Researchers from the Roswell Park Cancer Institute in Buffalo, New York, have shown that mice housed at their thermoneutral temperature show reduced tumor formation and metastasis mediated by the adaptive immune system. Their work was published today (November 18) in Proceedings of the National Academy of Sciences.

“It’s one of the things that’s under everybody’s...

A team led by Elizabeth Repasky, a professor of immunology at Roswell Park, housed mice at either subthermoneutral temperature (ST)—22°C to 23°C—or thermoneutral temperature (TT), and then injected them with cells from four different tumor types. In all four models, the scientists found that mice formed tumors less quickly at the higher temperature. They also showed that tumors were less likely to metastasize in mice at TT. In a different mouse model, where tumors have been shown to form in response to a carcinogen, the scientists demonstrated that tumor formation was also delayed at TT.

The authors attributed the differences in growth to the antitumor adaptive immune response, as mice with compromised immune systems did not exhibit a temperature-dependent difference in tumor formation. They also saw a reduction in immunosuppressive cells and an increase in CD8+ lymphocytes and activated CD8+ T cells when mice were housed at TT. Mice with tumors were shown to have a preference for temperatures even higher than TT, spending most of their time in the warmest spot available—a 38°C chamber—when given the choice, suggesting that they might feel colder than mice without tumors, who chose a chamber at TT.

“We’re very excited about this because we know that people model all kinds of diseases in mice,” said Repasky. “Without paying attention to this big change in their metabolism—because they’re making more heat—I think we’re really undermining the ability of these models to be accurate.”

“It’s really remarkable in the sense that we all do our experiments at a temperature that doesn’t really give us the optimal conditions for evaluating immune responses to tumors,” said Suzanne Ostrand-Rosenberg, a professor of biological sciences and biochemistry at the University of Maryland, Baltimore County, who did not participate in the research. “It’s really a game changer,” she continued. “We may be missing a lot of effective immunotherapies because we’re simply not doing things under the conditions that optimize the activation of the immune system in mice.”

The paper “may provide some insight into why studies in animal models, particularly with immune drug development, may not always predict what happens in the clinic,” added Gregory Lesinski, an assistant professor in the division of medical oncology at Ohio State University, who was not involved in the work.

“I think it will be important in the future to dissect out the role of temperature in these other cell subsets,” he continued. “[The authors have] done a really nice job with the T cells, but we can certainly learn a lot more about other cell types relevant to cancer and immunology.”

And while most people are not constantly cold, “stress is stress,” said Repasky. “Different types of stress that are endured by people are actually mediated by the same sympathetic nerve pathway [by which] cold stress is mediated in mice.”

Repasky said her group may have stumbled onto “a pathway that is easily manipulated in mice by the thermostat, but [that] might have implications for why people who seem to be a lot more chronically stressed than others do more poorly in response to, not only their cancer risk, but also their overall outcome after therapy.”