Researchers have leveraged childhood immunity to tetanus in order to target treatment-resistant pancreatic cancer, according to a new study published this week (March 23) in Science Translational Medicine. Using an inert, nontoxic species of Listeria bacteria, scientists were able to deliver benign tetanus proteins into pancreatic tumor cells in mice, thereby flagging them as foreign to circulating memory immune cells. Following the treatment, both the original tumor and those that had metastasized shrank significantly, and the mice lived longer as a result.

Pancreatic cancer is difficult to treat for several reasons. The cancerous cells often lack the mutational vulnerabilities exploited by current pharmaceutical therapies. Tumors also often grow and metastasize before the onset of symptoms. And as they grow, they secrete molecules that dampen the local immune response while also coating themselves in thick, fibrous myeloid-derived cells that physically shield the tumor. “Pancreas cancer goes cloaked,” Gregory Beatty, an immunologist at the University of Pennsylvania who studies pancreatic cancer but was not involved in the study, tells STAT. As a result, only 10 percent of patients live for more than five years after diagnosis.

Gravekamp and her colleagues used Listeria, the bacteria behind most cases of food poisoning, as a means to circumvent pancreatic cancer’s many tricks. Listeria preferentially infects cancerous and tumor-associated cells, and the form that Gravekamp used was genetically modified to bear proteins from the bacteria that causes tetanus. Because most people are immunized against tetanus as children, the body’s memory T cells continue to recognize tetanus antigens throughout life, even if cancer-spotting T cells fail to recognize pancreatic cancer. The researchers hypothesized that if the tetanus look-alike were to build up within tumor cells, its antigens would end up displayed on the surface of the tumor, and that could trigger an immune response. “Essentially, our new therapy makes immunologically ‘cold’ tumors hot enough for the immune system to attack and destroy them,” Gravekamp says in a press release. 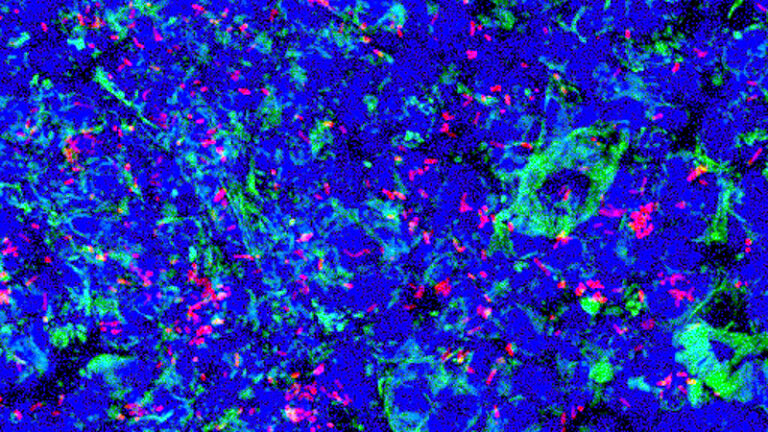 To test the method in vivo, Gravekamp and her colleagues inoculated young mice engineered to develop pancreatic cancer as they aged with a standard tetanus vaccine. Then, once the mice had advanced cancer, the scientists injected tetanus-bearing Listeria into their abdomens, and a subset also received a dose of a chemotherapy drug to test the two treatments in combination. The bacteria were quickly swarmed by myeloid-derived immune cells, which ended up being infected by the bacteria and shuttling them to the tumors. “Ironically, the tumor attracts these same myeloid-derived cells because they help the tumor grow and metastasize,” Gravekamp tells STAT. “So, they bring the Listeria as a Trojan horse to the tumor.”

Shortly after, the researchers report in their paper, the body’s T cells began attacking the tumors. This happened even in the absence of the chemotherapy drug, but mice that received both treatments received the largest benefit. These mice saw their pancreatic tumors shrink by an average of 80 percent and their metastases by 87 percent compared to untreated controls and also lived roughly 40 percent longer, amounting to several months.

Beatty calls the team’s method “a unique spin on this particular approach [in using Listeria]” to treat cancer, adding that “I think it has a path forward” in clinical trials. While it’s unknown how well this method might work in people—plenty of techniques that worked well in mice go on to flop in humans, and the heterogeneous nature of the human tumor microenvironment presents a consistent challenge—Beatty tells STAT that he can see Listeria being added to the standard of care in addition to things like surgery and chemotherapy. “Surgery is the best chance for a ‘cure,’” Beatty says. “Incorporating [the therapy] in that setting is attractive, and maybe you could improve the number of patients [healed].”

See “Could Cancer’s Microbiome Help Diagnose and Treat the Disease?”

Moving forward, the researchers plan to test the new technique in humans. Gravekamp tells STAT that a patent for the therapy has already been licensed to New York-based biotech company Loki Therapeutics and, speaking to New Scientist, she adds that they are currently organizing a clinical trial to assess the safety of injecting the bacteria into the abdomens of healthy patients before moving on to those with pancreatic cancers. In the meantime, Gravekamp has also applied the tetanus-containing Listeria to murine models of ovarian cancer, with “very, very promising results,” and will be targeting bowel and brain cancers next.

More Articles in cancer and microbiology