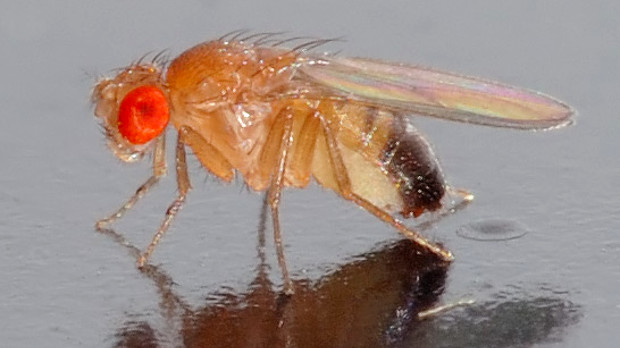 Drosophila melanogasterWIKIMEDIA, ANDRÉ KARWATHMost genomes harbor unruly, mobile DNA elements that can cause potentially harmful mutations. Transposons—thought to be related to viruses—can copy themselves and insert randomly around the genome. A paper published today (October 15) in Science provides a greater understanding of how cells shut down these rogue jumping genes. Greg Hannon of the Cancer Research UK Cambridge Institute and his colleagues have identified a protein in fruit flies that appears to halt transposons before they begin to leap.

“This is a mountain of impressive work, a huge amount of data, [the result of which] is that we now understand something about how piRNAs are transcriptionally silencing their targets,” said molecular geneticist Keith Slotkin of Ohio State University who was not involved in the work. “We knew that this was happening, but the mechanism was all question marks and hand-waving.”

Piwi-interacting RNAs, or piRNAs, are short...

In fact, with the exception of Piwi itself and a protein called Asterix—a nucleus-specific component of Piwi complexes—the machinery responsible for transcriptional silencing of transposons was unknown. To identify possible candidates, Hannon’s team scoured the results of their own and others’ genome-wide screens for piRNA pathway components in the fruit fly Drosophila melanogaster, finding one that seemed to fit the bill: the protein CG9754.

Suppression of CG9754 in fruit fly ovaries not only ramped up transposon transcription, but also erased the repressive epigenetic marks normally present at suppressed transposon loci—indicating that the protein was acting at the genetic loci rather than post transcriptionally.

However, Hannon’s team supposed that CG9754 was most likely targeting nascent transcripts at the loci rather than the DNA. For one thing, Piwi-piRNA complexes bind transcripts in the cytoplasm, explained Hannon. Moreover, previous studies suggested that silencing of transposons in the nucleus depended, somewhat counterintuitively, on their transcription.

To test whether CG9754 was acting as they suspected, the team devised a method for artificially recruiting CG9754 to the nascent RNA transcript of a reporter gene, and then intergrated the reporter into the fruit fly genome. The researchers showed that when tethered in this way, CG9754 could both suppress reporter gene expression and establish repressive epigenetic marks at the reporter locus. Recruiting Asterix or Piwi to the reporter’s RNA in the same manner did not result in transcriptional or epigenetic repression. Hannon said he thinks CG9754 “forms a bridge between the very specific piRNA pathway components [Asterix and Piwi] and the general transcription silencing machinery.”

Indeed, the team then went on to show that CG9754 directly interacted with Piwi and utilized a number of epigenetic regulatory proteins to exert its suppressive effects.

Concluding that CG9754 was clearly a critical component of Piwi-mediated transcriptional silencing, the team opted to give the protein a catchy moniker: “Panoramix”—after the supportive friend of the comic-strip character Asterix.

Suppression of transposon activity—especially in germline cells—is essential for preserving genome integrity. “If you lose this machinery, you are sterile,” said Hannon. “It is universally essential for fertility.”

Although the Piwi-piRNA pathway is highly conserved across many species, including mammals, Panoramix does not appear to have a mammalian equivalent. “I’m certain that there is one, it’s just not obvious,” Hannon said. “It’s something we’ll have to go and look more deeply for.

“Though details may differ between mammalian cells and drosophila,” said Moran, the work “opens up new grounds for exploration, which is what good science is supposed to do.”