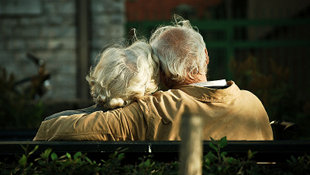 Scientists studying mice genetically engineered to lack an anti-inflammatory factor have stumbled upon an unexpected secondary function for the protein—it slows down aging. The surprising discovery, which is reported online today (May 24) in Molecular Cell, has implications for inflammatory and age-related diseases, but also for cancer.

“We were [shocked], to put it mildly,” said Robert Schneider of New York University, who led the study. “This is certainly not something anybody would have ever anticipated.”

Schneider and his team had been analyzing mice that lacked a protein called AUF1 and they'd shown that it was critical for binding to and degrading mRNA transcripts encoding inflammatory proteins. But besides having a dampened inflammatory response, mice lacking AUF1 displayed some unusual characteristics.

“We noticed that they aged very rapidly,” said Schneider. “Every cell in this animal’s body was undergoing senescence.” Furthermore, “with each subsequent generation the ability...

“I suspect that there are some people who wouldn’t have been broad enough in their knowledge to be able to make that leap,” said Joan Steitz, a molecular biologist at Yale University, who did not participate in the study. “I found that impressive.”

Schneider’s team discovered that their AUF1-lacking mice did indeed have lower levels of telomerase than wild type mice as well as shorter telomeres, which was the most likely explanation for their rapid aging. They also found that the AUF1 protein associated with the promoter region of the telomerase gene and could activate transcription.

That an mRNA binding protein can also bind to DNA is not too surprising, said Myriam Gorospe a molecular biologist at the National Institute on Aging who did not participate in the research. “There are a number of examples of RNA binding proteins that have affinity for nucleic acids in general.” More surprising, however, was that it could regulate transcription. “It is pretty unusual,” said Steitz. “It will undoubtedly spur lots of people to look at their RNA binding proteins and figure out whether they too have additional transcriptional functions.”

Exactly how AUF1 recognizes and binds the telomerase promoter is unknown, but Schneider’s team found that two particular isoforms of the protein appear to be responsible. These isoforms are different to the ones that degrade mRNA, explained Gary Brewer a molecular geneticist at the University of Medicine and Dentistry of New Jersey who was not involved in the work. “I think it’s really exciting,” he said. “You’ve got one gene, four isoforms—two that have one function and two that appear to have a completely different function… Nature works in some kooky ways.”

The discovery of AUF1’s dual functionality “has huge ramifications and will have an impact on many areas of biology and gerontology and pathology,” said Gorospe. One example is cancer, she said. “In cancer we see more telomerase activity, because cancer cells need healthy telomere ends so that they can continue dividing.” And, she went on, “AUF1 is generally higher in cancer tissues compared with their healthy counterparts.” The discovery that AUF1 can activate telomerase transcription would now, at least in part, explain that link. “In the light of this role [for AUF1] in maintaining telomerase function, I think we’re all going to be looking at it a lot more closely,” she said.