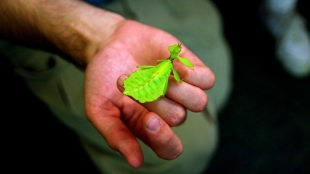 The Victoria Bug Zoo is extremely small. It consists of just one room partially divided by a wall that holds a row of tanks on one side and Canada’s largest ant farm on the other. In 1997, the Zoo's founder, Carol Maier, started the collection, which now includes more than 50 insect species, after completing her entomology degree from the University of Guelph. Since then, the Zoo, tucked away in an old red brick building in the heart of Victoria, British Columbia, has grown into a unique experience for thousands of squealing guests, who often get to handle giant walking sticks, shaking leaf insects, and other exotic insects from around the globe.

Learning about and getting closer to tropical insects and arachnids such as cockroaches and tarantulas is the main focus of a revolving tour that Maier and a team of guides leads every day....

“[The bugs] don’t mean to be scary," Maier says. "We’re brainwashed from an early age, and Hollywood doesn’t do them any favors.”

The Bug Zoo has operated in downtown Victoria for 15 years, and has housed an ever-changing cast of characters. Including the ant colony, the Zoo currently hosts around a million specimens, and Maier travels frequently to find new and exotic individuals. Some of them are endangered, like the Zoo’s two teenage Mexican red leg tarantulas, Nora and 16-year-old Jane, who are also the oldest inhabitants.

Many of the Bug Zoo’s tour guides are young entomology students getting hands-on experience with insects and public education. They help name the bugs and bring their stories to life, keeping the entomological facts straight, while sometimes getting creative with the characters.

The leaf-cutter ant farm, for example, used to be just one colony, but is now two, separated to avoid war. According to guide Mark Hanson, splitting up the two colonies became necessary when workers carrying the original queen dropped her down a long tube, killing her and threatening colony collapse. If you ask another guide however, said Maier, you might get a different story.

See a slideshow and learn about some of the Bug Zoo’s most colorful characters.