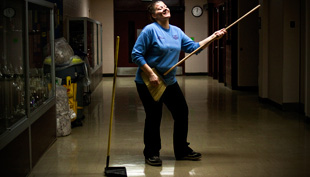 Working the graveyard shift can increase the risk of developing diabetes via two separate mechanisms, according to research published in Science Translation Medicine today (April 11). The study, which followed 21 patients over the course of 3 weeks in a controlled laboratory setting, revealed that the double whammy of sleep deprivation and a sleep/wake schedule that’s out of sync with the body’s internal biological clock reduced the amount of insulin secreted by the pancreas as well as the insulin sensitivity of various organs and tissues.

The results provide a potential mechanism to explain a growing body of epidemiological data that indicates shift workers are at an increased risk of weight gain, metabolic abnormalities, heart disease, diabetes, and obesity, among other disorders. In 2007, the World Health Organization (WHO) even classified shift work as a probable carcinogen, due to accumulating evidence that disruptions to the circadian rhythm increased...

“There is always a question as to whether or not the effects of shift work are due to sleep effects or whether they’re due to changes in the way clocks in the body maintain their synchrony to changes in the environment,” says Joseph Bass, an endocrinologist at Northwestern University who was not involved in the study. “What this study is trying to do in a novel way is to get at that separation”—and it found that both factors play a role.

In a 2010 study published in Diabetes, neuroscientist Orfeu Buxton of Harvard Medical School and colleagues showed that restricting sleep in a group of 20 healthy young men to 5 hours a night for just 1 week significantly reduced their insulin sensitivity—thus confirming that sleep restriction increases diabetes risk by impairing how peripheral tissues respond to the hormone.

“What we wanted to know in this study is what happens when you also have circadian disruption,” Buxton explained.

To answer this question, Buxton and his colleagues enrolled 21 volunteers in a 6-week study. During the first 3 weeks, the patients were instructed to stay in bed for 10 hours every night at their homes to ensure they were fully rested and had their biological clocks set to the natural day/night cycle. At the end of those 3 weeks, they were admitted to the Intensive Physiological Monitoring Unit of the Center for Clinical Investigation at Brigham and Women’s Hospital in Boston and had their glucose and insulin levels measured following a hearty breakfast.

For the following 3 weeks, the patients were locked into 28-hour days and forced to sleep less than 7 hours a night. Each day they woke up 4 hours later than the previous day. The meals and room lighting also shifted according to their schedule.

“So this would be like going four time zones west every day for 3 weeks,” Buxton explained.

At the end of those 3 weeks, the patients’ glucose and insulin levels were measured again following an identical breakfast to the one they received 3 weeks prior.

“What we observed was that glucose levels went much higher after eating this meal and stayed high for hours longer,” Buxton said. Three of the patients even had sustained high glucose levels that would clinically classify them as prediabetic.

The increased glucose levels, they found, resulted from a 27 percent decrease in insulin production. Taken together with the results from Buxton’s previous sleep deprivation study—in which a decreased sensitivity to insulin was observed—this suggested that sleep deprivation and circadian rhythm disruption exerted their effects on the body’s metabolism via separate mechanisms: lack of sleep led to decreased insulin sensitivity, while circadian rhythm disruption led to decreased production of insulin.

“There’s a coupling between the way that biological clocks orchestrate both feeding and metabolism and their alignment with the light cycle, “ Bass said. “If you perturb that arrangement that has evolved over millions of years, then it manifests as metabolic disorders, particularly [disrupted] glucose metabolism.”

“We respond to food differently” after prolonged circadian disruption, Buxton added. “Our pancreas doesn’t work as well as it should and can’t metabolize the food we eat to protect us from diabetes.”