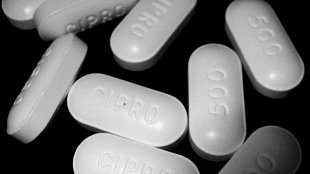 CiprofloxacinWIKIMEDIA, SHORELANDERIn addition to the growing threat of antibiotic-resistant bugs, there may be another reason doctors should refrain from freely prescribing antibiotics. According to a paper published online today (July 3) in Science Translational Medicine, certain antibiotics cause mammalian mitochondria to fail, which in turn leads to tissue damage.

“What the authors are suggesting is that in addition to the bactericidal properties of antibiotics, they also affect . . . the mitochondria,” said Navdeep Chandel, a professor of medicine and cellular biology at Northwestern University in Chicago, who was not involved in the work. “And what’s fascinating about that is that mitochondria are thought to be [ancient] bacteria themselves.”

Indeed, mitochondria, the organelles responsible for energy production in the cell, have bacteria-like DNA and other molecules, suggesting that mitochondria are the product of an ancient endosymbiotic event, in which a bacterium was engulfed by another cell. The...

This concern led Jim Collins, a professor of biomedical engineering at Boston University, to study the effect of antibiotics of mitochondria. His team had previously reported that antibiotics cause a surge in the production of reactive oxygen species (ROS)—highly reactive and potentially damaging molecules—inside bacteria, which may be part of the drugs’ bacteria-killing mechanism. Collins and his team therefore asked whether antibiotics also lead to an increase in ROS production in mammalian mitochondria.

The team treated human cell lines from a variety of tissues with three different types of bactericidal antibiotic: ciprofloxacin, ampicillin, and kanamycin. “We found that at clinical levels each of the antibiotics generated ROS,” said Collins, “and we showed that they do this in part by disrupting mitochondrial function.” On the other hand, an antibiotic called tetracycline, which does not kill bacteria but merely prevents their growth, did not cause an increase in ROS.

The cells given the bactericidal antibiotics also exhibited oxidative stress—the damage caused by ROS binding and oxidizing various cellular components. Indeed, there were signs of DNA, protein, and lipid damage, said Collins. And when the same three antibiotics were given to mice, increased ROS levels and oxidative damage to tissues was also apparent.

For the average person who might be prescribed a short course of antibiotics, DePinho reckoned there would probably be nothing to worry about. “We have very robust DNA damage repair mechanisms that in the short term may attenuate any clinical impact,” he said. However, he added, “it could be different in the context of chronic administration of antibiotics.”

To see if they could prevent such damage, Collins and his colleagues treated the human cells and the mice with an antioxidant called N-acetyl-L-cysteine (NAC) in addition to the antibiotics. The NAC mitigated the antibiotic-induced ROS increase and oxidative stress, but importantly it didn’t affect the antibiotics’ bactericidal activities. Mice given a urinary tract infection, then treated with an antibiotic, cleared the bacteria just as effectively whether or not they were given NAC along with an antibiotic treatment.

The lack of NAC’s effect on the bactericidal ability of the antibiotics “is likely specific to this antioxidant,” said Collins, because other antioxidants that his group has since tested did reduce antibiotic activity. Collins speculated that NAC might not penetrate the bacteria themselves, and reduce only the mitochondrial-derived ROS, thereby protecting the cells but not the bacteria. But, Collins said, “more work is needed to find out what would be the effective and appropriate antioxidant to take.”

For now the paper’s immediate message, said Collins, is that “coupled with the concerns about drug-resistance. . . one should only use antibiotics when you really need antibiotics.”