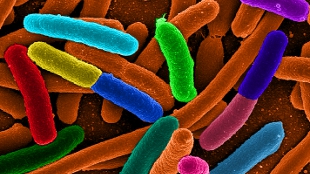 Using whole-genome sequencing to track the evolution of bacteria as they are exposed to ever-increasing levels of antibiotics, researchers have identified some consistent—and potentially practicable—genetic mutations, pointing to new possibilities for conquering resistant bugs, according to a study published in today’s (December 18) Nature Genetics. And a second study in the journal, also using whole-genome sequencing, examines how drug-resistant bacteria continue to evolve after antibiotic treatment stops, which may have implications for overall resistance management.

“Both of these studies are fine examples of the utility of whole genome sequencing to test, as well as generate, hypotheses,” Bruce Levin of Emory University in Atlanta and his PhD student Pierre Ankomah said in an email. “They both address important questions about antibiotic resistance.”

Antibiotic resistance is a growing problem in medicine, and many studies have tried to understand the molecular...

So Kishony and his colleagues constructed a device, called a morbidostat, that maintains the growth rate of bacteria as antibiotic levels rise. “You have a culture of bacteria and a computer that is monitoring how happy they are, namely how fast they grow,” explained Kishony. “If they are growing too fast it adds more drug.” In essence, it keeps the bugs unhappy and unhealthy, thus pressuring them continuously to adapt.

“It’s a dream of biologists to watch evolution in real time and to observe the actual genetic changes,” said Michael Elowitz of the California Institute of Technology in Pasadena. “This device, together with the amazing power of whole genome sequencing, allows you to actually do that.”

Kishony’s team used the morbidostat to culture genetically identical, drug-susceptible Escherichia coli strains in the presence of one of three antibiotics—chloramphenicol, doxycyclin, or trimethoprim—five cultures for each. After a few weeks of forced evolution with the morbidostat, the researchers performed whole-genome sequencing on all fifteen cultures. While the ten cultures grown in chloramphenicol and doxycyclin contained a range of mutated genes, all five trimethoprim cultures had mutations in the gene encoding dyhydrofolate reductase, the target of the drug.

The consistent outcome seen with trimethoprim prompted the team to ask whether all five cultures followed similar evolutionary paths. Genome sequencing of bacterial samples taken each day from the trimethoprim cultures revealed that indeed they did. “What they see in this study is that in some circumstances you can get an incredibly deterministic sequence of mutational events,” said Elowitz.

Such predictability could in theory offer doctors the ability to monitor patient infections and stay one step ahead of the bacteria. “If we know what are the mutations that are going to appear, we might be able to get smart and think about how to prepare for them in advance,” said Kishony.

A similar monitoring strategy could be used for determining if and when drug-resistant bacteria switch to more vigorously growing forms—the subject of the second paper by Sebastian Gagneux of the University of Basel in Switzerland and colleagues. Drug-resistant bacteria tend to have a considerable growth disadvantage compared to their drug-susceptible counterparts when grown without antibiotics in a lab—a fact that led some researchers to predict lower transmission rates for drug-resistant strains.

Sequencing the genomes of both lab-evolved and clinically isolated rifampicin-resistant Mycobacterium tuberculosis, Gagneux’s team revealed that the more vigorously growing bugs had developed a set of mutations that seem to confer a growth advantage, even in the face of the genetic changes associated with resistance.

“Rather than revert to the higher-fitness, sensitive state, the bacteria remain resistant and the costs of resistance are compensated for by mutations,” explained Bruce Levin and Pierre Ankomah of Emory University in Atlanta, Georgia, in an email. This means, said the pair, that “expectations that resistance will wane because it imposes a burden on bacteria may be overly optimistic.”

Should the identified mutations be proven to offer M. tuberculosis a growth advantage—so far only a strong prediction—it suggests they could be useful, “as markers of drug-resistant strains that might be particularly transmissible,” said Gagneux.

“These studies together show the value of inexpensive whole-genome sequencing for developing insights into microbial strategies for dealing with antibiotic treatments,” says Jim Collins of Boston University. “I think these are going to be the types of studies we are going to see with increasing frequency this coming decade.”