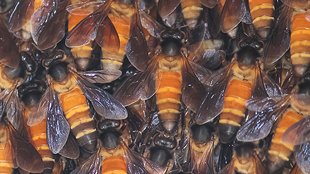 WIKIMEDIA, DR. AJAY BALACHANDRANSome bees are solitary, some live in small groups, and some live in colonies with many thousands of individuals. Studying the genomes of 10 bee species that represent these different living arrangements, scientists have now identified the genetic signatures of communal living. The results, published today (May 14) in Science, reveal that one key feature of increased sociality is an elaboration of gene regulation capacity.

“By doing this comparative analysis they show several clear changes associated with the evolution of the two eusocial groups of bees [including] changes in the regulation of gene expression,” said evolutionary ecologist Laurent Keller of the University of Lausanne in Switzerland who was not involved in the work. “Bees are highly social and we are highly social . . . so it’s interesting to see what are the mechanisms that lead to the evolution of such a complex system.”

And, much like gene expression increases or decreases across different cell types in multicellular organisms, some researchers have predicted that the evolution of eusociality would require a species to increase its capacity to regulate genes in individuals. To investigate whether this is indeed the case, Kapheim and her colleagues analyzed the genome sequences of 10 bee species: three that lived solitary lives and seven social species that represented two independent ancestral origins, as well as differing degrees of eusociality.

The analyses revealed a “clear pattern of increased potential for gene regulation” in both evolutionary branches of eusocial bees, Kapheim told The Scientist. For example, there was an increase in the number of genes predicted to be methylated (a form of epigenetic regulation) and an increase in the number of transcription factor binding sites in the promoters of genes—particularly those genes that appeared to be linked to the evolution of eusociality. “The study suggests that there has been an increase in the complexity of gene regulation with increased social complexity,” said insect sociogenomics researcher Amy Toth of Iowa State University who was not involved in the work.

Kapheim and her colleagues also found a decrease in the number of transposable genetic elements and more constrained protein evolution in eusocial bees compared with their solitary counterparts. But perhaps the most surprising result, said Kapheim, was that “the independent transitions that we studied really seemed to be independent. . . . We don’t see a whole lot of evidence for convergent evolution.” That is, although the overall genomic signatures of eusociality were similar irrespective of origin, the genes involved were different.

For the purpose of making comparisons, Kapheim chose bee species that were either solitary or eusocial, but across the 20,000 or more species of bees (and indeed, across all animal taxa), sociality is a continuum, said Kapheim.  “There’s all kinds of variation in social behavior . . . and I think now, we’re going to have to dig in and start filling in those gaps.”

And not just for bees, said Toth. “The next step would be to broaden the comparison to a wider variety of social species.” For example, “this could be done with primates,” she said.