Vampire bats have an extravagant diet. As their name suggests, they feed exclusively on blood from other animals that they hunt in the dark. Getting all of their nutrients from this gory source is not easy, though. Blood is rich in protein, but notably light on fat and sugars. Previous studies, including an earlier reference genome, have sought to understand how vampire bats adapted to live off this peculiar diet, but an analysis of a new, even more complete and accurate genome sequence for the species, uploaded as a preprint to bioRxiv October 19, lends new insights into this question.

Comparing the newly assembled, reference-quality genome of the common vampire bat (Desmodus rotundus)—one of the three extant vampire bat species—to 25 genomes for other kinds of bats revealed 13 genes that were missing exclusively in this species. These losses may have contributed to the vampire bats’ preference and ability to dine on blood and to other traits, such as their remarkable cognitive aptitudes. Even among bats, vampire bats are considered smart, social animals; they’re known to regurgitate blood to roostmates facing starvation, especially to those who shared blood with them in the past.

The species’ first genome—sequenced together with the animals’ gut metagenome—revealed some genomic signatures associated with sanguivory, and highlighted the role of gut microbes in providing nutrients not readily available in blood. But while that study “gave us a lot of information” University of California, Berkeley, bioinformatician Yocelyn Gutiérrez-Guerrero (who was not involved in either genomic analysis) tells The Scientist in Spanish, the new genome’s higher resolution and sequencing depth, enabled by improved sequencing technologies, offers “more detail of the genomic landscape” and greater insight into the bat’s adaptations for blood feeding.

The new analysis, which has not yet undergone peer review, compared D. rotundus with 25 bat species, 16 more than were available at the time of the previous genome sequence. In particular, the new study included six recently sequenced species from the vampire bat’s family, the leaf-nosed bats (Phyllostomidae). The inclusion of these relatives, especially some of the species’ closest sister lineages, “allows us to pinpoint what exactly happened on this branch . . . leading to the vampire bats,” says Michael Hiller, a genomicist at the LOEWE Centre for Translational Biodiversity Genomics in Germany and coauthor of the preprint.

Losing a gene means not having a functional copy of it anymore. This could happen by having it entirely deleted from the genome or by having remnants of it for which the reading frame is “destroyed so much with frameshifts, early stop codons, and other mutations” that the gene is unlikely to code for a functional protein, says Hiller.

Developing methods to detect gene losses is challenging. Sequencing errors, alignment problems, or evolutionary changes that modify genes but do not inactivate them could result in misidentifying whether or not a gene is functional. Early studies on gene losses involved a lot of manual curation. In recent years, Hiller and his team have been working on accurately detecting gene losses on a larger scale in mammalian species, revealing the role of this genomic change in various phenotypic adaptations. Hiller explains that now, his team wanted to investigate “whether the loss of ancestral genes could have contributed [to the] physiological and metabolic changes” associated with the “very special diet” of the vampire bat.

Gene losses often follow dietary specializations “when some genes are not needed in an [animal’s] daily life” anymore, writes Huabin Zhao, a molecular evolutionary biologist at Wuhan University in China who did not participate in the new study, in an email to The Scientist. Prior to the sequencing of the first vampire bat genome, Zhao and his colleagues had identified losses of taste receptor genes for sweet and bitter flavors in the bats, which account for 3 of the 13 losses noted in the preprint. 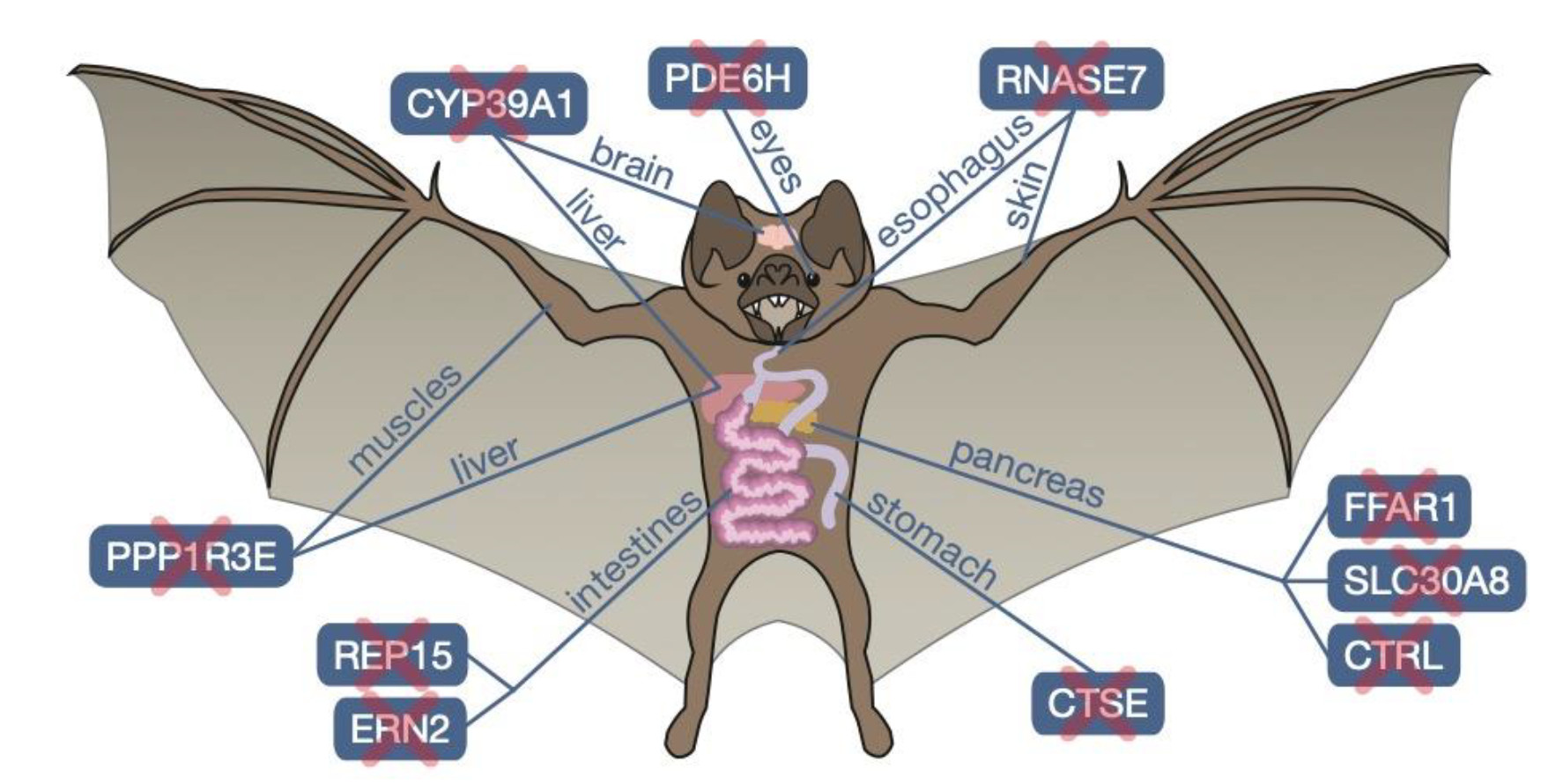 The remaining 10 had not been previously reported, according to the authors. Many of them offer hints as to how the bats get the most nutrition from blood, which is notoriously nutrient poor, says Gutiérrez-Guerrero.

Among the genes lost by D. rotundus are two likely involved in boosting insulin secretion. The bats may not need much insulin given the low amount of sugar in their diet. In fact, it was previously shown that they don’t secrete much insulin, says Hiller, which could stem from a need to keep the limited glucose obtained from their diet available in their bloodstream.

The bats also lack a gene believed to be involved in inhibiting trypsin, an enzyme which participates in protein digestion and absorption. Higher levels of trypsin activity could ultimately help them digest their protein-rich diet. Meanwhile, the loss of the REP15 gene could be boosting iron excretion, keeping the bats from becoming poisoned by the metal, which is abundant in blood.

Some of the newly identified gene losses speak to other aspects of the animals’ lifestyle, the authors suggest. One of them appears to be connected to vampire bats’ social abilities: they lack a gene that degrades 24S-hydroxycholesterol, a cholesterol metabolite known to play various roles in brain development and functioning. This loss may mean the bats have higher levels of the metabolite in their brains, something shown to improve spatial memory in mice, and which might account for the bats’ exceptional social memory.

Even though D. rotundus is an iconic species that has been well studied at the physiological and morphological level, caveats and uncertainties about the functional consequences of the gene losses remain, because “we still have many gaps in our knowledge,” says Hiller.

For instance, the new analysis indicated that the antimicrobial gene RNASE7 is functionally absent in the vampires, while the previous genomic analysis suggested it was under positive selection—the mutations detected were interpreted as boosting its bactericidal capacity. The conflicting findings spur more questions. Zhao suggests this could mean that the inactivating mutations detected by Hiller’s team are not present in all individuals of the species; Hiller says this would be “very unlikely” given the number of mutations present in RNASE7. But if RNASE7 is indeed nonfunctional in D. rotundus, future studies will need to identify exactly what pathogens are targeted by its protein and what it does in other bat species.

Hiller says he and his team would also like to look at selection, gene duplications, the expansion of gene families, and differences in gene expression in the future, to obtain “a more complete picture of the genomic changes that are involved in blood feeding.” Additionally, Hiller says that he and his colleagues are working on genome assemblies for the other two species of vampire bat to see whether they share gene losses with D. rotundus.