Previous research has shown that the gut-brain connection, which refers to signaling between the digestive and the central nervous systems, is based on the transport of hormones, but a study published today (September 21) in Science suggests there may be a more direct link—the vagus nerve.

This research presents “a new set of pathways that use gut cells to rapidly communicate with . . . the brain stem,” Daniel Drucker, who studies gut disorders at the Lunenfeld-Tanenbaum Research Institute in Toronto, Canada, and was not involved with the project, tells Science.

Building on an earlier study in which the team found that gut cells had synapses, the researchers injected a rabies virus, expressing green fluorescence, into the stomachs of mice and watched it travel speedily from the intestines to the rodents’ brainstems.

When they grew sensory gut cells together with neurons from the vagus nerve, the neurons moved across the dish to form synapses with the gut cells and began electrically coupling with them. Adding sugar to the dish sped up the rate of signaling between the gut and brain cells, a finding that suggests glutamate, a neurotransmitter involved in sensing taste, may be key to the process. Blocking glutamate secretion in gut cells brought these signals to a grinding halt.

“We think these findings are going to be the biological basis of a new sense,” coauthor Diego Bohórquez, an assistant professor of medicine at Duke University School of Medicine, says in a statement. “One that serves as the entry point for how the brain knows when the stomach is full of food and calories. It brings legitimacy to idea of the ‘gut feeling’ as a sixth sense.” 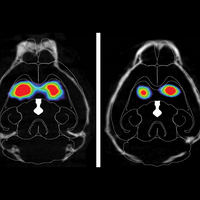