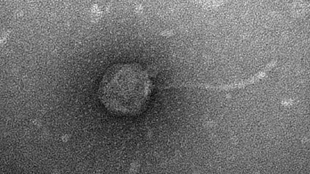 How many genes does it take to get to the center of a new trait? A pair of papers published today (January 26) in Science looks at just that, probing the molecular basis of how organisms evolve new physical characteristics. In the first study, a virus finds a novel way to infect E. coli under the pressure of co-evolution. In the second study, E. coli adapts to a hot environment using two different survival strategies.

Together, the papers demonstrate that the evolution of beneficial new traits—also called key innovations—is repeatable, rapid, and often spurred by co-evolution and the interaction of genes.

“It’s always been one of the big problems of evolution—how do you get beyond fine tuning of what you’re already doing and come up with something radically new, a fundamentally new trait?” said John Thompson...

Bacteriophage ?, a tiny DNA virus, infects E. coli through a single receptor, LamB, on the bacterium’s outer membrane. Evolutionary biologist Richard Lenski, along with PhD student Justin Meyer and colleagues at Michigan State University, designed an experiment to see if the virus could evolve to infect the host via a different pathway. The team grew 96 populations of E. coli and ? together under conditions that stop the E. coli from expressing LamB. The team waited to see whether the virus would adapt to infect the bacteria through an alternate receptor in the absence of its sole receptor. And it did. About 25 percent of the populations evolved the ability to enter the E. coli through a second receptor, OmpF, within about 12 days. The adapted viruses remained capable of binding LamB, but had gained this new function. By sequencing the viral DNA, the team identified four mutations in the J protein, a specialized protein on the virus’s tail that normally binds LamB, that were required for the protein to bind the OmpF receptor.

But not all the ? populations evolved. The team looked at the E. coli’s DNA to determine why, and found that the bacteria were co-evolving to impede the virus. In those cases, the E. coli had a mutated transmembrane channel in its inner membrane, so the virus’s DNA could no longer penetrate the cell, regardless of which receptor it bound. In this case, there was no benefit for the viruses that could use OmpF. So while these populations gained some of the J protein mutations, which appeared to improve attachment to LamB, they never acquired the fourth and final mutation necessary for OmpF binding because the selection pressure to do so was lost.

“There’s this really delicate co-evolutionary dance,” said Meyer. “The bacteria take one step, which creates the environment, so then the phage takes several steps, and if it gets to the fourth one, then it can enter through a new receptor… But if the bacteria take a second step before the phage gets there, then they shut down the process and we don’t have that interesting outcome.”

“Co-evolution can predispose this shift to happen in the phage, but it can also constrain it,” said Thompson, who wrote an accompanying perspective in Science. “[Co-evolution] is one of the great engines of biodiversity. It’s an adaption generator.” In the second paper, Brandon Gaut of the University of California, Irvine, and Olivier Tenaillon of the French National Institute of Health and Medical Research in Paris describe a year-long experiment in which they grew 115 populations of E. coli at high temperatures (42.2°C). “Temperature is a complex challenge for an organism to respond to because it can affect so many parts of the cellular process,” said Gaut.

Of the populations that survived, the team identified 1,331 mutations affecting more than 600 sites in the bacterial DNA. Few of the mutations were shared from population to population, suggesting little overlap between their evolutionary paths. But when the scientists stepped back and analyzed the mutations at the level of functional gene groups, they were surprised to find a strong pattern: E. coli populations adapted to the heat by mutating one of two pathways—either the RNA polymerase complex or the termination factor rho, but rarely both. Additionally, each of these pathways had a set of associated genes that were also mutated in parallel, suggesting that epistasis, or the interaction of associated genes, plays a role in adaptive evolution.

“You tend to have RNA polymerase and its associated genes as one set of solutions to this adaptive problem, or you get mutations in rho and another set of associated genes,” said Gaut. Unfortunately, he added, the team does not yet know how either solution physically helped the cells to survive the high temperature, or what role the associated genes play. They plan to begin teasing out those answers by comparing the phenotypes of E. coli strains with some of the mutations that were recorded.