We humans look in the mirror and take in our reflections. We adjust our clothes and wipe crumbs off our faces because we realize that the person staring back at us is our own self. Since the 1970s, researchers have been using mirrors to probe the minds of animals, gleaning clues from how they interact with and investigate their reflections in a quest to understand their cognition.

A study published in PLOS Biology this month (February 7) suggests that fish may join the ranks of animals that recognize themselves in a mirror. The researchers documented the behavior of the cleaner wrasse (Labroides dimidiatus), a coral reef species famous for its symbiotic grooming—it eats parasites residing on other fish—in front of its reflection. The authors concluded that the fish possessed mirror self-recognition by passing what’s called the mark test. It’s a bold claim in a field in which scientists already debate the meaning of the test and how it should be used.

The mark test was developed in 1970 by Gordon Gallup, an evolutionary psychologist at the University at Albany, State University of New York, who used it to study four chimpanzees and how their responses to a mirror changed over time. On its face, the mark test seems simple—give an animal a mirror and watch what it does. Then let the animal acclimate to the mirror and later see how it reacts to a new visual mark drawn on a part of their bodies that couldn’t be viewed without the mirror. Is the animal curious about its reflection and will it realize the mark is not part of itself?

“What’s wonderful about the mirror study for me is that it’s a very simple device that allows . . . pun intended, to get a reflection of [animals’] cognitive processing ability,” says Diana Reiss, a cognitive psychologist and marine mammal scientist at Hunter College, who has studied mirror self-recognition in elephants and dolphins.

It’s a question of whether you can become the object of your own attention.

In individuals that can truly make sense of the reflection’s relation to one’s self, Reiss, Gallup, and others have seen three phases of behavior that emerge upon mirror exposure, she says. At first glance, animals either engage in social behavior, acting as though the mirror image staring back is another animal of the same type, or in exploratory behavior, such as looking behind the mirror or over or under it.

The next phase is contingency testing, where animals are trying to get a sense of what the mirror does. They’ve figured out that its not another animal, but they still haven’t fully gotten the picture. They repeatedly perform a variety of weird behaviors. For instance, a dolphin may wiggle one fin. At this stage, the animals are usually silent, Reiss says. They aren’t vocalizing as if there’s another creature.

At some point, the animal has a “lightbulb moment” when it realizes the mirror is a tool they can use. This marks the onset of “self-directed behavior” to carry out actions they wouldn’t be able to without the mirror. For instance, Reiss describes dolphins looking at their genitals. They’re using the mirror as a tool that lets them see parts of their body they couldn’t otherwise see.

The exclusive club of creatures that has shown evidence for mirror self-recognition without prior training includes humans, great apes, dolphins, elephants, and magpies, a bird that belongs to the corvid family. Attempts with a menagerie of other animals including horses, squid, parrots, dogs, sea lions, and even monkeys have failed to show clear signs of mirror self-recognition. It’s fascinating to try to understand what sets these animals apart, says Reiss. “We don’t know that recipe yet,” Reiss says.

Still, the mirror test provides some clues about how animals process the world around them. To engage with the mirror, the animals have to show selective attention, a choice to concentrate on the mirror, says Reiss. Going further to use the mirror to watch themselves manipulate their bodies or objects they can’t otherwise see shows that they grasp the relationship between their body and its reflected image. Gallup puts it this way: “It’s a question of whether you can become the object of your own attention.”

So far, animals showing evidence of mirror self-recognition also possess high encephalization quotients, meaning that they have large brains relative to their body sizes. These brainiacs also tend to display higher levels of empathy and social awareness. They can care for and cooperate with animals around them.

Gallup argues that conclusive evidence of mirror self-recognition is limited to humans and the great apes. The results with elephants and dolphins are suggestive until they have been replicated, he says.

“The thing that makes great apes and humans interesting is that, based on contemporary evidence, they all shared a now-extinct, proto-apelike, proto-hominid ancestor in common,” says Gallup. That common ancestor evolved self-awareness, he asserts.

Others in the field argue that self-awareness is not binary. “We need to start thinking more along the lines of a gradual scale,” says Frans de Waal, a biologist and primatologist at Emory University. De Waal points to the way that dogs and cats adapt to the mirror, eventually ignoring it even if it puzzles them at first. Parrots and monkeys learn to use the mirror as a tool, though they don’t show signs of recognizing themselves, he says. “I think it’s very good that we have the mirror test,” says de Waal. “[But] it would be a mistake to rely upon it as a sole indicator of self-awareness,” he says.

Several other tests have been developed to probe how an animal understands its body’s place in the environment, says de Waal. For instance, instead of using mirrors, some experimenters have used cameras to show chimpanzees their own hand hidden from view inside a box so the chimp can watch the screen to navigate and fish out food. Macaques have been able to use a joystick to move a cursor while discriminating between the one they control and a decoy that they can’t. And a test used with elephants asks them to hand a stick over to a researcher; the catch is that the stick is tied to a platform on which it stands. The elephant must realize that moving its body is part of completing its task.

An “olfactory mirror” test was tried with dogs that involved altering the scent of their urine. The interpretation of such tests may not be so clear, but they attempt to size up the cognition of animals that are less visual. The original mirror test “is not really an ideal test for an animal like an elephant or a dog who is so much oriented to smell. It’s sort of unfair for these animals to do these tests,” says de Waal. “There’s many more [tests] that could be developed, and they will be developed because this field is sort of taking off at the moment.”

In the case of the fish study, cleaner wrasses scraped their throats against a hard surface when they had a brown mark injected there, but didn’t when the mark was clear. The fish also performed some unusual behaviors, such as swimming upside down in front of the mirror, but other researchers in the field are skeptical as to whether the behaviors truly amount to mirror self-recognition.

“The work itself was well done,” says de Waal, but he adds that the experiment is confounded by the mark having been injected into the fish, likely causing a physical sensation, rather than just a visual change. And Reiss questions whether the fish truly showed contingency testing and self-directed behavior in front of the mirror. Gallup sees the test as experimentally flawed because it lacked a control of marked fish that lacked prior exposure to a mirror.

“[W]e were very interested in understanding the sort of extreme limits of cognitive capacities in fish and other social animals,” says Alex Jordan, one of the study’s authors and an evolutionary biologist at the Max Planck Institute for Ornithology in Germany. “And so the mirror test was a sort of natural endpoint because it’s held up as a pinnacle of cognitive capacity in many animals including primates,” he says. 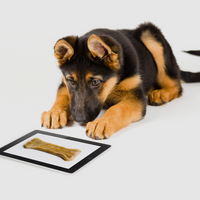