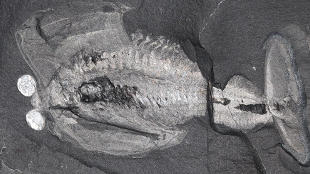 A 500-million-year-old Odaraia alata fossil.IMAGE COURTESY OF JEAN BERNARD CARON (ROYAL ONTARIO MUSEUM)A researcher has gathered a piece of evidence that helps shed light on the evolutionary transition from soft-bodied animals with no well-defined heads to hard-bodied animals that sported heads. The clue comes from one of the oldest fossilized brains ever found—a more than 500 million-year-old specimen of the Cambrian arthropod Odaraia alata found in western Canada. The fossil brain shows evidence of a neural connection between a hard plate, called the anterior sclerite, and eye-like structures via nerves that originated in the front part of the brain. Javier Ortega-Hernández, a postdoc from the University of Cambridge, who published the findings last week (May 7) in Current Biology, found a similar connection in the fossilized brain of a soft-bodied ancient trilobite. In addition, the anterior sclerite in O. alata bears similarities to a structure identified in...

“The anterior sclerite has been lost in modern arthropods, as it most likely fused with other parts of the head during the evolutionary history of the group,” Ortega-Hernández in a statement. “What we’re seeing in these fossils is one of the major transitional steps between soft-bodied worm-like creatures and arthropods with hard exoskeletons and jointed limbs—this is a period of crucial transformation.”

“This suggests that the anterior sclerite was lost or fused to the head shield in living arthropods,” David Legg, a researcher at the Oxford University Museum of Natural History in the United Kingdom who was not involved with the study, told LiveScience.

“This helps use to determine to which segment the more posterior head segments belong, thereby allowing us to compare these fossil and recent arthropods and gain a better understanding of their relationships and the way that their appendages evolved,”

The fossils Ortega-Hernández studied are stony impressions of animals that resulted from the Cambrian Explosion—a profusion of animal species that resulted from rampant evolution—prior to which soft-bodied animals ruled the Earth. Studying fossils like O. alata and other ancestral arthropods could yield more clues as to how life transitioned from being soft and headless to being harder and headier.

“We know from the fossil record that the earliest ancestors of arthropods are soft-bodied. They look a little bit like worms with legs,” Ortega-Hernández told LiveScience. “But then, at some point in time, we start seeing arthropods that look a lot more familiar. They have this jointed skeleton.”