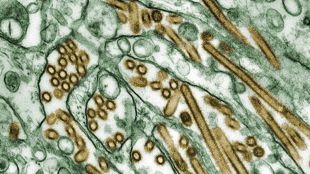 In the wake of news last month that researchers had created a version of the deadly bird flu that was easily transmissible by air, a heated debate has arisen in the scientific community about whether or not the research should be published. But some experts are taking the discussion a step further back, and wondering why the research was conducted at all.

“Why should our tax dollars be used to create new pandemic pathogens?” said Richard Ebright, a chemical biologist at Rutgers University.

The bird flu breakthrough came from two separate groups, one at Erasmus University in the Netherlands and another at the University of Wisconsin, Madison, who successfully converted H5N1 into a form that can be transmitted between ferrets in droplets through the air. Soon after, the National Science Advisory Board for Biosecurity, an advisory group to the US government, took the...

But many scientists and security experts are questioning the value of such research and wonder whether stepping in at the publication stage is simply too late.

In the era of Wikileaks and the ease of posting things on the Internet, it's unlikely that simply excluding the data from Science or Nature will keep the details under wraps for long, said Randall Larsen, who was the executive director of the Congressional Commission on the Prevention of Weapons of Mass Destruction Proliferation and Terrorism.

By the time the research gets to publication, “the genie's already out of the bottle,” he said.

The argument that such research should be conducted but not published stems from the chance, however remote, that groups with malicious intent could deduce how to make a deadly biological weapon. Many countries have biological weapons programs, for example, which are developing deadly pathogens, Larsen said. When the Soviet Union collapsed, Sergei Popov, one of the heads of the country's genetic weapons program defected. While debriefing Popov, Larsen learned that the Soviet Union had active programs to weaponize Legionnaire's disease, Ebola, smallpox, and HIV.

And now, with biotechnology continuing to advance, even a small, but determined terrorist group or an apocalyptic cult could conceivably generate a weaponized pathogen that was capable of doing great damage, he added. But some scientists say the biggest problem isn’t the risk of a terrorist group using an engineered pathogen as a weapon, but simply the existence of such pathogens. A likelier scenario, said Ebright, is that a disgruntled or unhinged employee may voluntarily release small pox or Ebola, as the FBI says occurred in the 2001 anthrax scares.

Another fear is the possibility of accidental release. Not every country that could acquire these pathogens will follow robust safety protocols and rigorous oversight, said D. A. Henderson, an epidemiologist and physician who headed the effort to eradicate smallpox. And while the World Health Organization issues guidelines for pathogen security, each country must decide for themselves how to regulate such research, said WHO spokesperson Gregory Hartl.

Henderson suspects influenza has escaped the lab at least once before. In 1977, a flu epidemic in Russia was largely identical to the 1950 strain, and likely originated in a research lab in China or Russia, he said. “The details of it are still mysterious, but all of a sudden we had a virus which we hadn’t seen for quite a number of years, which began causing real major epidemics. So far as we can make out it’s identical to one that had been in the laboratory.”

If the real problem is mere existence of engineered pathogens in the first place, why is the research being conducted at all, and why are organizations like the National Institutes of Health funding it? The NIH funded the bird flu research and the US government funds much of the world's bio-defense research.

The rationale behind such funding is, of course, the exploration of virulence for the purpose of developing countermeasures to these pathogens, such as vaccine and treatments. “The argument is that knowing what can be done provides help in planning,” Ebright said. But research to make flu, Ebola, or smallpox deadlier or more infectious will likely not help in combating the spread of such diseases, he added.

Viruses can evolve different mutations than those created in the lab, agreed Henderson, and the real bottleneck in preventing casualties is a slow and outdated system of developing vaccines. For instance, the United States uses the same method to develop flu vaccines as it did 50 years ago, which takes 2 weeks to produce a vaccine even when the potential mutations a pathogen harbors are known, Henderson said. And even if our vaccine manufacturing capabilities increase, there aren't surveillance systems in place that could catch early signs of a pandemic before it had spread, he added.

Not all scientists think that research on pathogen virulence should be tabled, however. It depends on the pathogen being studied and the research being conducted, said microbiologist and infectious disease specialist David Relman, who was part of the working group which recommended censoring the bird flu data.

But one thing that most scientists can agree on is the need for a more thorough and standardized oversight process to ensure that the risks of pathogen research don't outweigh the benefits. Some types of research may merit increased oversight, but which projects should qualify remains a point of contention, Relman said. “We need to come to a mutually agreed upon process for deciding what work even deserves this type of more careful scrutiny.”

Clarification: This story has been updated to clarify that the University of Wisconsin researchers who made H5N1 transmissible among ferrets never made an official announcement of the results.