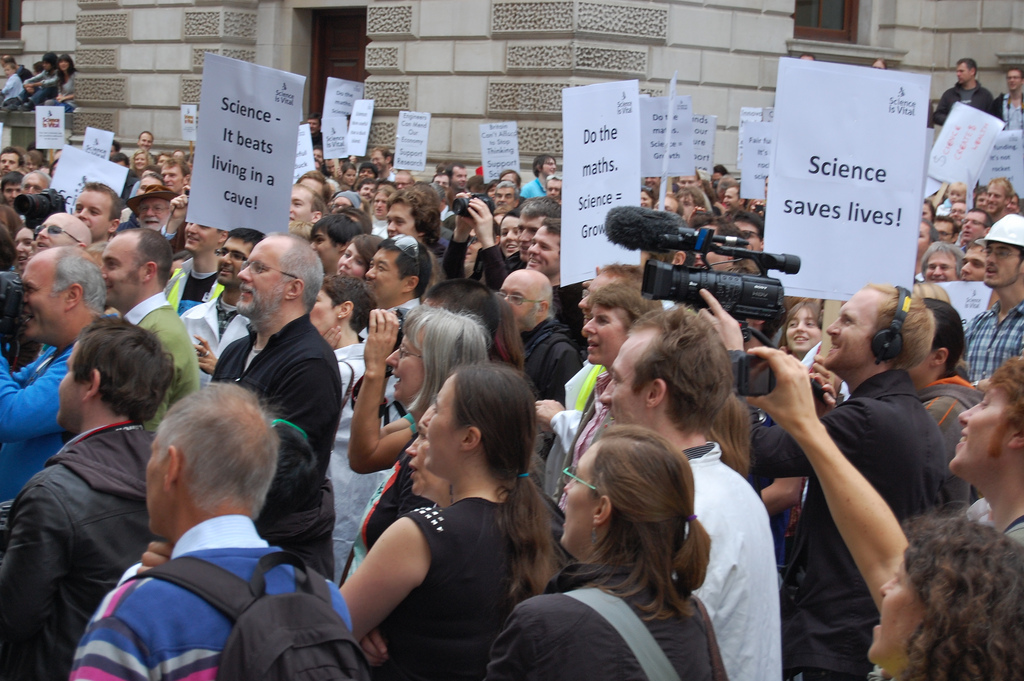 "Science is Vital" rally in the U.K., 2010FLICKR, SHANEWith the March for Science on the horizon, researchers are debating whether overt displays of science advocacy may help or harm public perception of science. And when scientists have a question, they typically approach it with data. John Kotcher and colleagues at George Mason University in Fairfax, Virginia, published a study on the subject last month (February 26) in Environmental Communication.

“There just wasn’t a whole lot of empirical evidence out there about the potential consequences of scientists engaging in advocacy, in terms of risks and benefits,” Kotcher told The Scientist. “We look at our study as the first step toward a larger research agenda into this question.”

After conducting a randomized survey of 1,235 Americans, Kotcher and colleagues found that most respondents did not rate a fictitious climate scientist...

But not all experts are convinced that there is no danger in science advocacy. “I don’t think there’s any question about it—I’ve worked in this field for 50 years, and I’ve seen a steady erosion of the credibility of scientists, generally,” Robert Lackey, a former senior biologist with the US Environmental Protection Agency (EPA) who now works on ecological policy and natural resource management at Oregon State University, told The Scientist. “If your day job is science and your night job is policy advocacy, why would I trust your day job?”

The debate over the extent to which scientists should dive into science and policy advocacy has come to head in recent months, as researchers and scientific societies consider participating in the March for Science on Washington, DC, and related events.

Proponents of scientists advocating for the inclusion of science in public policy tend to maintain that researchers have a duty to explain their data, pointing policymakers to the best available evidence. “Philosophers have made the argument in favor of scientists engaging in advocacy as a public service,” Kotcher said. “Scientists hold specialized expertise. We need scientists not just to worry about their own credibility.”

Others take issue with the claim that defending evidence-based policy could undermine a scientist’s credibility. “It implies that science is conducted by robots and not human beings,” said Noella Gray, an assistant professor of geography at the University of Guelph in Ontario and a coauthor on a 2008 Conservation Biology paper that examined how scientists and policymakers within the international marine conservation community viewed science advocacy.

Gray and colleagues found that most survey respondents within the marine conservation community believed scientific results were objective, but many indicated their beliefs that personal opinions and values could not be eliminated from the scientific process. Nearly all of the respondents indicated having believed that scientists should be integrated into public policymaking. “Science is an inherently human exercise, with values,” Gray told The Scientist. “I don’t think asking people to stay quiet and not share their views undermines the validity of the knowledge they’re producing.”

There aren’t many models of how the public responds to this line of reasoning, but Kotcher maintains that the so-called Climategate scandal could provide scientists with an idea of the magnitude of the risk of dabbling in policy. After a hacker revealed research documents from the Climactic Research Unit of the University of East Anglia, climate skeptics seized the opportunity to demonstrate that scientists manipulated climate data for political purposes.

Of course, the documents suggested no such thing, but the damage was done. Or was it?

A study published in American Behavioral Scientist in 2012 found that, despite widespread media coverage of the scandal, only 29 percent of Americans surveyed between December 2009 and January 2010 said they recalled Climategate; 13 percent of survey respondents indicated that the associated events had decreased their trust in scientists. “If that’s our reference point, we can get a sense of the potential magnitude of the risk of something like a March for Science,” Kotcher said. “It’s instructive to think about the fact that most Americans probably won’t even hear about it, and an even smaller fraction of those individuals will think of scientists as less trustworthy as a result.”

Meanwhile, at least in the marine conservation community, Gray said she senses a growing acceptance of the need for scientists to get involved in science policy advocacy, regardless of the consequences. “People recognize we’re in dire straits,” she said. “I’d say the dominant view in conservation circles is that scientists should be speaking out, and that this does not undermine their credibility.”

Opponents of scientists advocating for the inclusion of science in public policy tend to take a more nuanced approach. “Scientific input into policymaking is crucial,” Lackey said. “I’m not of the view that scientists should publish and then go off into their ivory towers and hope for the best.” Nonetheless, in a 2016 paper for the Bulletin of the Ecological Society of Australia, Lackey argued that scientists have no place in final policy decisions.

“Policy decisions are based on many factors, only one of which is science,” he told The Scientist. “Once you’re outside the scientific arena, a scientist’s policy preferences should be no more important than anybody else’s.” To Lackey’s mind, a scientist’s job is to help the public and, occasionally, politicians make better decisions. When he worked at the EPA, Lackey always felt his job was to provide “policy-neutral science, relevant to the policy question, in a way that people could trust,” he said.

Any activism that goes beyond simply informing the public of the facts, he continued, threatens to take public policy from the hands of the people. “You have to be careful here, because you end up in a debate over a technocracy versus a democracy,” said Lackey. He noted that, in a democratic society, even when the science is clear to everyone there can be different policy priorities. (Even if everyone agreed that climate change is in part caused by humans, for instance, it would not necessarily mean everyone would consider cutting carbon emissions a priority over free trade.)

Ed Hanna, a private consultant who specializes in environmental policy analysis, said that decision makers may take advantage of scientists who present data along with policy recommendations. Politicians are usually held accountable when they make decisions that overtly contradict scientific evidence, Hanna said. But when that evidence is tainted by —real or perceived—bias, some decision makers may feel free to discard the crucial data along with the recommendations. “When the science becomes mixed with public policy, it’s easy to ignore it,” Hanna said. “Because now the science is shaded with interpretation. Accountability disappears.”

“Scientists often want to give not facts but what they think the decision should be,” he added. “That is a profound risk in an evidence-based decision-making environment.”

As to whether scientists can toe the line and advocate for representation of science in public policy while maintaining their credibility, Hanna is skeptical. “I don’t believe you can be both”—a scientist and an advocate, Hanna said. “The reason is very simple. It’s hard enough in science to avoid the creep of bias. It’s everywhere.” And, with the stakes so high, Hanna dismissed the claim that scientists have a right to advocate policy. “You’re asking society to look to you for objective, unbiased facts,” he said. “In doing so, you essentially disenfranchise yourself. You no longer have the right to be an advocate.”

Kotcher noted that, in addition to his own findings, a 2009 Pew Research Center study found that 76 percent of Americans surveyed indicated believing that it is appropriate for scientists to become active in political debates. The Pew data is not definitive, however, and Kotcher’s recent study on the subject left questions unanswered.

The only path toward an evidence-based answer to many of these questions, Kotcher said, is further studies exploring the relationship between advocacy and credibility. “My best advice is that there’s still a lot of work to do,” Kotcher said. “We need to really start looking at this as more of an empirical question.”

Correction (March 15): This story has been updated from an earlier version, which incorrectly stated the original publication date and results of the American Behavioral Scientist study described. The study was published online in 2012, based on data collected just months after the “Climategate” emails were publicized. The Scientist regrets the errors.