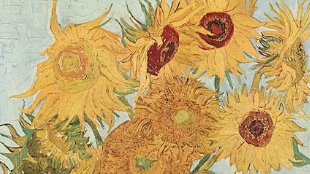 Of all of the works by 19th-century painter Vincent Van Gogh, perhaps he’s most well known for his sunflowers. The flowers, arranged in a vase, are cast in shades of yellow and brown, simultaneously signaling life along with impending death and decay.

His use of color is legendary among students and appreciators of art, and doctors and medical researchers have used his sometimes-surreal pallet as a basis for diagnosing Van Gogh with a panoply of medical disorders. In the past decades, paper authors and letter writers in the Journal of the American Medical Association have speculated that his odd color-sense was caused by the toxic side effects of epilepsy treatment, an herb used to make absinthe, as well as a variety of eye problems, from glaucoma to color-blindness.

No one will ever know for sure if illness affected Van Gogh's artwork, but that didn’t stop... But if you look closely at the picture above, you’ll notice that color is not the only thing slightly off about the painting. One of the sunflower variants portrayed lacks the recognizable black sunflower center and, instead, looks rather like a dandelion, with long thin petals bursting out.

These represent a sunflower variant that University of Georgia plant biologist John Burke studies in his lab—not to unravel any secrets of Van Gogh (although he admits that the connection is quite compelling), but because they might provide insight into the evolution of plants.

“The sunflower family is most speciose family of flowering plants,” and the variation in flower heads affects how easily they are pollinated by bees and butterflies, said Burke. He studies the genetics behind sunflower variation to understand how “changes in these genes might influence diversification rate in the family.” Performing simple Mendellian crosses, Burke created the double-flowered mutant, which was “likely the same mutation that Van Gogh was painting,” he said. Molecular studies showed that these flowers have a 999-basepair insertion in the HaCYC2c gene, which influences petal development. This mutation changes where the gene is expressed: instead of staying put in the yellow sunflower petals, the double-flowered mutant also expresses it in the discs, the short and stubby florets that make up the flower head and eventually develop into seeds.

This mutation essentially turns the entire flower head into a puffball, festooned with petals and the gene  expressed throughout. Burke's paper was published last week (March 29) in PLoS Genetics.